Radoslav Barkov
Many others

Conquer the Earth and the entire solar system.
Eradicate all Earth culture (all failed).

The Settlement Defense Front, also known as SetDef or simply known as the Front and SDF for an abbreviation, is the main antagonistic faction of the 2016 video game Call of Duty: Infinite Warfare. It is a militaristic fascist state and paramilitary organization led by Salen Kotch. They fight against the United Nations Space Alliance and its armed forces, Solar Associated Treaty Organization in their bid to take over the entire Solar System and erase everything Earth-born.

SDF was widely viewed by the world as a totalitarian regime and a rogue state. They are composed of off-world insurgents who seek to control the solar system. They see themselves as the true inheritors of the solar system, and believe their way of life to be "stronger, more pure", than the people of Earth. In the Front's mind, living off-world has made them more worthy of ruling the solar system, while those who reside on Earth are weak "fat cats", living off the bounty of the off-world colonies. They value functionality over their style, an attitude reflected in everything from their ships to their weapons and armor, which is modular, with everything designed to protect them from the harshness of space. They have repurposed service robots into military roles, adding to their legions of troops. For the Front, a true victory would mean the utter cessation of all planetary resources reaching the Earth. They are willing to kill innocent people, soldiers, and anyone who gets in their way.

Their soldiers and civilians are required to help the Front at all times, with youth groups and military service starting at 12 years old. Having over 900% soldiers per capital, the SetDef uses their strength in numbers as well as extremely advanced weaponry and vehicles to cripple their enemy. They own CORT-SOL, IDX Systems, and various other technology businesses that supply them with weapons and combat rigs.

The SDF has a number of territories in the solar system include, but are not limited to:

In Multiplayer, four of the six Combat Rigs are SDF branded: Synaptic, FTL, Stryker and Phantom. Those rigs can all be seen on Single-player being used by SDF soldiers.

In the first mission, Rising Threat, the SetDef is seen in Europa, a moon of Jupiter. SATO sent three soldiers, Dan "Wolf" Lyall, Tee, and Sipes, alongside a Raven aerospace craft, for a reconnaissance mission on a research facility located in the moon that had lost contact, and which stores secret weapon technology. The SetDef is shown to have wrecked the place, killing all of the security and workers. The SATO soldiers manage to destroy the weapons inside, but are captured and executed.

Having initialized the operation code-named "RIAH", the SetDef prepares to war, going into the next mission, Black Sky. After a rogue worker infiltrated the Earth and turns the AATIS anti-air system against UNSA's own ships during the Geneva parade, SetDef launches a surprise attack on the city, softening up the Earth's defenses while attempting to completely destroy the AATIS system. The Front is forced to retreat to space after UNSA forces led by Admiral Fredrick Raines recapture the system and apprehend the rogue worker, identified as Akeel Min Riah, one of the Front's commanders.

The UNSA launches a counterattack and manages to destroy a few ships and clear the area. At that moment, the Olympus Mons, the Front's prized super carrier, jumped into them, and proceeded to obliterate all of UNSA's ships using a massive F-Spar Torch cannon, save for Retribution, Ocana and Tigris. The captain of the Retribution orders a ramming maneuver, while the Tigris opens fire with all guns, and the Olympus is forced to retreat. The captain dies as a result, and Nick Reyes is subsequently promoted to captain of the Retribution.

After that, the UNSA starts to mount a counter attack with only three of their remaining ships, with one of them leaving to patrol other areas of the Solar System. To further cripple the Earth, the SDF takes over the Lunar port, and start executing civilians and soldiers alike while clearing it. The UNSA manages to infiltrate the port and take it back. The only SDF carrier left in the port is boarded by the UNSA, who, after acquiring vital information from its systems, destroys it and leaves.

The carrier destroyed in the moon battle had tracking information about every other ship on the SDF fleet, as every vessel of the Front tracks each other. From here, the player can do various ship assault and Jackal missions that are not vital to the plot. Assuming they are canon to the story, the UNSA tracks and assaults various SDF ships, recovering stolen technology and weaponry, stealing a prototype Skelter, stopping and destroying a SDF carrier carrying massive amounts of chemical WMDs, securing raw materials from a scrapyard and a mining colony, and assassinating many top leaders of the SDF. During this, it is shown the SDF managed to destroy one of the three remaining ships, Ocana.

Afterwards, the UNSA attacks a refinery on the moon of Saturn, Titan, where the SDF is making and refining fuel for its fleet and army. The UNSA successfully infiltrates the location, however, they are ambushed once again by the Olympus Mons. The mission continues and the UNSA successfully manages to destroy the refinery. When parting home, the Olympus appears again out of the cloud layer and damages the Retribution and Reyes' Jackal. The Retribution retreats, leaving Reyes and E3N ("Ethan") stranded in space. They are picked up by the only other ship remaining, the Tigris.

The SDF decides on a plan; they move the Olympus to an asteroid mine near the Sun, and knock it off course, forcing the UNSA to go and rescue the workers, since they need all raw materials they can get to rebuild the SATO fleet. While the Retribution is busy with this, the Olympus ambushes and destroys the other ship, Tigris, leaving Retribution as the only remaining ship of the SATO fleet.

Reyes decides that there is only one course of action at the moment: lure the SDF to Earth and reactivate the AATIS so it can engage the SDF ships and devastate their fleet. The plan goes awry, and the commander from the first mission, Akeel Min Riah, breaks out and leads a wild chase through still SDF occupied Geneva. Riah manages to knock out Reyes and destroys the AATIS system completely, causing Earth to become vulnerable to the SDF. Reyes decides on a different plan: board and capture the Olympus Mons itself, and use its massive firepower to destroy the SDF fleet and their shipyard on Mars. SATO successfully manages to capture the Olympus before Salen Kotch can scuttle it and destroy Geneva. After dealing with the Admiral, both the Retribution and the Mons travel to Mars, where Reyes uses the same tactic Kotch employed on the Geneva battle: use the Mons' stolen F-SPAR cannon to obliterate the entire SDF fleet and hopefully the shipyard, but the ship is severely damaged and has all of its weapon systems knocked offline before being able to destroy the shipyard. Reyes orders a ramming maneuver; however, the Retribution hovers on the way of the Olympus after sustaining massive damage to its control surfaces, and Reyes orders the Mons to pull up to avoid a crash, to no avail. Both ships collide and fall into the surface of Mars.

Having most of its crew survive the crash, the UNSA mounts a desperate last assault in the Mars shipyard. The battle is tough and most of the UNSA crew dies in the way. The survivors manage to get to the shipyard, and steal a large SDF destroyer released by Reyes on a self-sacrifice before using it to completely rip apart the entire shipyard, permanently crippling the war potential of the SDF.

After the destruction of their primary shipyard in Mars, along with the deaths of all their commanding officials, the destruction of the flagship Olympus Mons, all space warfare carriers, multiple destroyers, almost all exoskeleton troops as well as high casualty in the infantry from SATO's counterattack, the SDF armed forces were crippled to the point where they are unable to conquer the solar system. 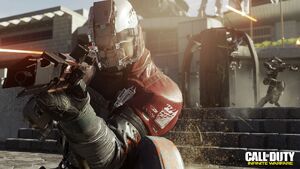 A SDF soldier in action. 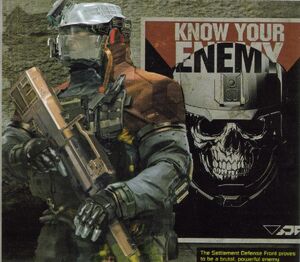