Powers manifesting from the seven deadly sins of Judeo-Christian religions

Escaping their prisons and causing havoc.

Torment Captain Marvel in order to make him suffer (ongoing).

Cause as much destruction and chaos as possible when they escape their prisons (ongoing).

The Seven Deadly Enemies of Man are a villainous group of demons in the DC Comics universe. They are enemies of Captain Marvel (Shazam).

The Seven Deadly Enemies of Man, also known as the Seven Deadly Sins, are seven powerful demons, that represent the seven deadly sins of Judeo-Christian religions, The demons can take control of people's bodies and force them to follow their base desires. The Sins were captured by the wizard Shazam many years ago and encased in seven mockingly stone statues, which were placed in the Rock of Eternity. Currently, the Enemies remain imprisoned, but they escaped on at least one occasion the destruction of the Rock of Eternity at the hands of the Spectre, however, Captain Marvel managed to trap them once again.

The demons have escaped their prisons several times to cause havoc, usually freed by another villain. King Kull releases them, planning to make Sin bombs and destroy the world along with turning Billy Batson to stone, but he is defeated and the Sins again imprisoned.

The Seven Deadly Sins identify them by their traditional theological versions (Pride, Envy, Greed, Wrath, Sloth, Gluttony, and Lust). When the Spectre destroyed the Rock of Eternity and killed Shazam the Sins were released. When the Rock was rebuilt the Sins were again captured, although they try and torment Marvel as he can hear their thoughts, and they are implied to have caused trouble at a full moon. It is claimed that Pride is the rudest and dangerous.

Seven Deadly Enemies of Man imprisoned in their statues.

The Seven Deadly Enemies of Man Appearances in The New 52.

Seven Deadly Enemies of Man imprisoned in Batman: The Brave and the Bold.

Seven Deadly Enemies of Man imprisoned in Superman/Shazam!: The Return of Black Adam. 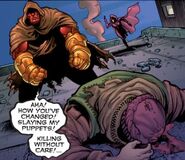 Retrieved from "https://villains.fandom.com/wiki/Seven_Deadly_Enemies_of_Man?oldid=3466416"
Community content is available under CC-BY-SA unless otherwise noted.