Gain more power so they can wipe out the Gohma by any means necessary and have complete control over Gaea to protect both humanity and demigods.

The Seven Deities are the central antagonists in the 2012 video game, Asura's Wrath. They are seven powerful Demi-Gods that seek to gain more power so they can wipe out the Gohma, by any means necessary, and have complete control over Gaea.

Formerly the Eight Guardian Generals, after having the Emperor of Shinkoku assassinated under Deus' orders, they blamed the murder on Asura, one of their former ally/general. They effectively framed him for it and betrayed him, as well as killing and banishing him into Naraka, and kidnapping his daughter, Mithra. Asura's wife and Yasha's sister, Durga, was killed in the process by Sergei.

As Asura is resurrected multiple times by the Golden Spider and brought back from Naraka, that spans over the course of 12,500 years, throughout the course of the game with his wrath in full effect, he goes on a personal quest of vengeance upon his former allies, as each of them attempts to kill Asura to prevent him from interfering with their plans.

As a result of the events that occurred throughout all of the game, all members of the Seven Deities are deceased, with Asura killing 6 of the 7 members: 5 directly, 1 indirectly, and 1 killed by someone else.

The Seven Deities are a powerful group of demigods who watch over the Earth, which they call "Gaea". They have watched over Earth for thousands of years. Formerly known as the Eight Guardian Generals, the Seven Deities formed as part of a plan, put into action by the extremist demigod commander, Deus. The Seven Deities were created to collect the souls of mortals in order to convert them into  Mantra for the Great Rebirth and create an eternal paradise for demigods only. As part of the grand plan, the Seven Deities banished a former ally and demigod down to Earth and had the Emperor of Shinkoku murdered in order for Deus to assume control. 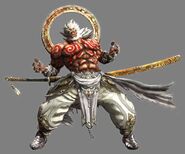 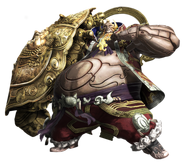 Yasha
Add a photo to this gallery

Retrieved from "https://villains.fandom.com/wiki/Seven_Deities?oldid=4033059"
Community content is available under CC-BY-SA unless otherwise noted.