Stalking and taking photos of the Yorkin family.

To be a part of the Yorkin family.

Seymour "Sy" Parrish is the main protagonist/antagonist of the 2002 psychological thriller film, One Hour Photo.

He was portrayed by the late Robin Williams, who also played Walter Finch in Insomnia, Rainbow Randolph in Death to Smoochy, and Merritt Rook in the Law & Order: Special Victims Unit episode "Authority".

Although not much is known about his past, it is implied towards the end of the film that Sy's father exploited him for child pornography. This would explain his desire to be a part of the Yorkins, whom he considers to be the perfect family. It is unclear what became of Sy's parents, although it's stated that his mother died, and it's unlikely his father is still alive. It could even be assumed that as soon as Sy became of age, he severed ties with him as he was no longer of use. He could have also been incarcerated for his crimes.

As an adult, likely in his late 40s, Sy is a photo technician who works in a mini-lab he calibrated inside a (presumably) Los Angeles SavMart in the fictional Evans County. Sy had been working at SavMart since 1990 during the events of the film, which was released in 2002. Sy claimed that he had not done any prints wrong in 11 years. Sy claimed to have worked point of sale mini labs for twenty years total.

He leads a lonely life outside of the department store. His work is his life, as he has no one to go home to at the end of each day; he spends his life at home sitting alone and watching television, and his only companion is a hamster. His favorite customers are the Yorkin family and he has developed an obsession for them, idolizing their happiness and affluence and wanting to associate with them.

Sy takes great pride in his photo work, disgusted at lazy photo technicians who put out washed out or darkened prints, and was very careful to ensure that the color was as rich and as real as it could possibly be and took enough care to do people's photos as if they were his own — especially the ones for the Yorkin family. He secretly makes copies of the Yorkin family pictures and puts them on the walls of his apartment, fantasizing about being a member of their family and sharing their love he thinks they feel.

Sy purchases a photo of a woman at a flea market later, and then tells Nina that this was his mother after following her to a store. The following day, Sy is fired after the store manager Bill discovers that Sy has printed many more prints than have been ordered and paid for, as well as for spacing out on the job, taking 90-minute lunch breaks, giving the Yorkins' son Jake a disposable camera for free for his birthday, and having an altercation in public with the maintenance person on the developing machine. When Sy looks at the pictures one last time, he finds out Will Yorkin is having an affair, and his notions of their "perfect" family are shattered.

Sy starts taking pictures of Bill's daughter as revenge for firing him, leading to a police investigation against him. While they discover his obsession, Sy confronts Will and his mistress Maya Burson during a rendezvous in their hotel room. Armed with a knife and a camera, he forces the lovers to pose naked while he takes pictures of them. After the event, the police arrive, and he attempts to escape, but triggers an alarm; Van Der Zee chases him while Outerbridge discovers the traumatized couple. After the chase, Seymour is caught and arrested in the parking garage as he attempted to make a break for his car, with Sy saying he just "took pictures".

During the investigation, Van asks why he terrorized the Yorkins. Sy asks the detective questions about his family and he does not answer. He can tell that Van is a good man and not the kind of father that would take "sick, degrading pictures of his children". With Van preparing to take his confession, Sy asks for the pictures he took at the hotel, which Van says are "evidence". The photos appear to only be shots of objects and interior furnishings of a hotel room.

The film's ending is of an imaginary picture of Sy and the Yorkin family.

Sy Parrish is an older man who lives a lonely, monotonous, and monochromatic life. Despite being a stalker with delusions of the Yorkin family coming to accept him as practically family, Sy is a tragic character whose actions are driven by fear of being alone. Despite being the film's primary antagonist, Sy never hurts anyone. However, Sy does cross the line by stalking his boss's family after he is fired for stealing photos and by holding Will and Maya hostage at knife point and psychologically terrorizing them-also threatening death to Mr. Yorkin if he didn't do what he told him to. Sy's childhood was filled with sexual abuse, as his father forced him to do child pornography, something he would later call "sick" and "degrading", as well as "something that no child should have to do". This harsh upbringing had a strong impact on Sy's life and contributed to Sy's passion for photo developing. It also sheds light on why he forced Will and Maya to pose for photos. All of that explains why he did the things that he did and makes him a tragic figure, as he only wanted someone to love him. The argument can be made that Sy was denied a childhood and was much like a child in a grown man's body.

Based on Sy's temperamental behavior, it is entirely possible that Sy has Borderline Personality Disorder, also called Emotional Dysregulation Disorder. This illness is a mood disorder characterized by unstable moods and relationships, where the person affected desires close relationships with others, but this is made difficult by impulsive actions, paranoid behavior, and tendency to go from love to hate in a short period of time for various minor reasons. This disorder was likely caused by his abusive childhood. Because of this void in his life, Sy sought to fill it by attempting to be a part of the Yorkin fmaily, who he viewed as "perfect". However, this is made difficult because he does not know how to communicate properly with other people. Sy is also a very detail-oriented, meticulous, and tidy person who takes great pride in his work, suggesting that he may have Obsessive-Compulsive Disorder or maybe even be on the high-functioning end of the Autism Spectrum. 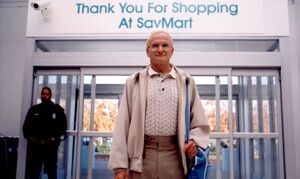 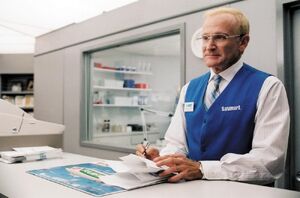 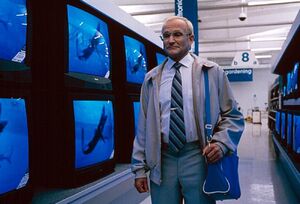 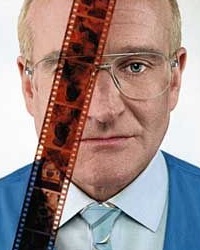 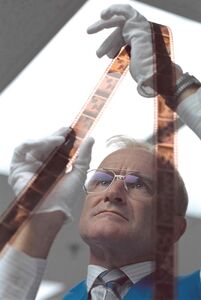 Mr. Seymour Parrish develops and checks photos for his customers. 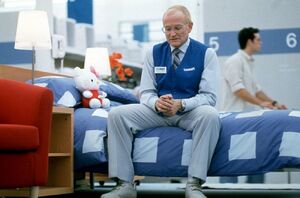 Seymour Sy Parrish is but alone and without friends or family. 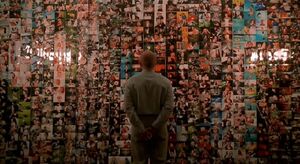 Seymour Parrish has looks at his collection of photos mounted on the wall. 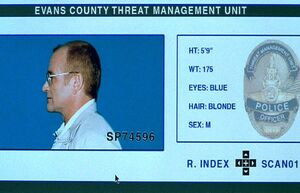 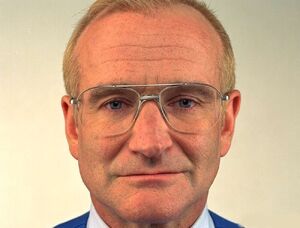 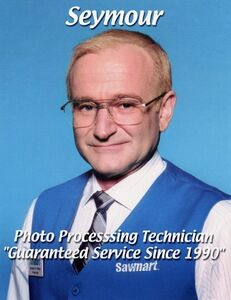 A picture of Mr. Seymour Sy Parrish who worked as SavMart's photo technician since 1990.
Add a photo to this gallery 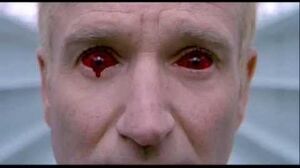 Sy's Nightmare
Add a photo to this gallery

Retrieved from "https://villains.fandom.com/wiki/Seymour_%22Sy%22_Parrish?oldid=3766517"
Community content is available under CC-BY-SA unless otherwise noted.