Scam Spongebob by Teaching him to Drive Worse than Before (succeeded).

Get away with his crimes (failed).

He is voiced by John O'Hurley who is best known playing J. Peterman in NBC Sitcom, Seinfeld and also voicing King Neptune from SpongeBob SquarePants.

Seymour's appearance could be almost described as a light bluish-gray shark version of SpongeBob. However, his appearance consists of a brownish-orange but almost balding hair and an orange eyebrows, a tucked ivory-colored shirt, a seemingly light purple-blue pants, and a red and tan-striped tie.

Seymour initially appears as an affable yet jovial mentor figure towards SpongeBob, trying his best to teach him to become a professional driver by making him drive in a reckless manner which causes danger towards other people. However, towards the end of the game, Seymour is revealed to be a manipulative con-artist who tricked SpongeBob to become a worse driver than before while taking an advantage to control SpongeBob when he's on low point due to constantly failing at his boating school test because of the pressure that he got during the test.

Seymour first appeared by visiting the boating school via a bus. Encountering SpongeBob when he's on a depressed state due to the latter failing to pass the Driving Test for the 78th times, Seymour then takes it as an opportunity to teach SpongeBob how to become a worse driver than before with his learning system called "D.R.I.V.E." which means "Destruction, Recklessness, Impairment, Velocity, and Escape." This resulted in SpongeBob happily accepting Seymour's offer without noticing his sinister intentions and after becoming Seymour's pupil, SpongeBob needs to collect 15 shells needed to sign up.

As the story progresses when SpongeBob learned how to drive recklessly via Seymour's scam system which resulted in SpongeBob getting steadily improving when it comes to reckless driving, several friends of SpongeBob tries their best to help him to pass Seymour's test with some of them paying 15 shells each to complete the final exams.

As SpongeBob completed all of the obstacles Seymour had given, he then seemingly reached one of his dreams on obtaining the boating license in which he congratulated his friends for helping him to reach this far. However, the celebration was cut short as Mrs. Puff confronts SpongeBob by telling him that the license is faked and he was scammed by Seymour all along.

After SpongeBob receives the revelation that Seymour is a con artist who tricked SpongeBob all along, SpongeBob becomes shattered after hearing all of this and then tries to catch him once and for all with a boat in order to teach Seymour a lesson. After the fight, Seymour's boat is destroyed as he was apprehended by Mermaidman and Barnacleboy as he says: "And I would've gotten away with it too if it wasn't for Mrs. Puff's meddling around!" before going to prison once and for all. Despite being tricked by Seymour, Mrs. Puff encourages SpongeBob to take the driving test again for some time which made SpongeBob regain his confidence back.

Each of Seymour's classes mostly consists of SpongeBob mostly being taught on being a destructive driver as if he were racing in a demolition derby. Some classes needed top 3 to finish the game mode. Here are the explanations of how Seymour's class looks like in Video Game mode:

In the Wii, there's also an exclusive class known as Recklessness Velocity which is the combination of both Recklessness and Velocity class in which the players must survive before getting knocked out by several opponents by avoiding them while trying to finish the race. 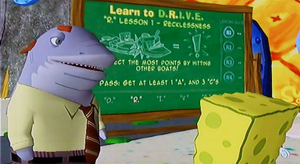 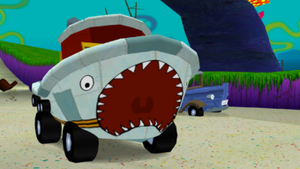 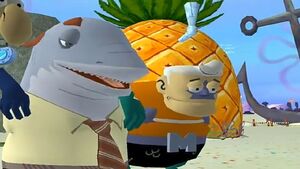 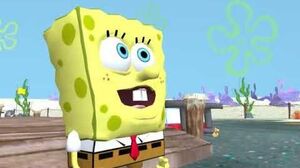 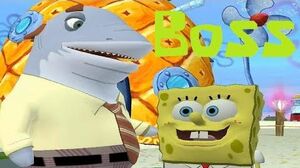