The Lord of the Herds

Deception
Manipulation
Intimidation
Control over the vast armies of Sgorrla

Trying to get Eloin to love him.

Make all deer as violent and ruthless as humanity.
Outlaw yearly herd battles to decide who will be the next herd leader so that no one can overthrow him.
Mate with Eloin.
End the worship of Herne.
Kill Rannoch and his friends to ensure the prophecy does not happen (all failed).
Become supreme ruler of all animals in Scotland (succeeded for a while).

Sgorr was born in Herne's Herd, one of the most powerful herds in the highlands of Scotland and named after the God of Deer Himself. Surprisingly, he never grew any antlers. As he grew he became fascinated with the violence and power of humans and desired it for himself. He spent time spying on a human village and learned things from them, such as sharpening antlers just as humans sharpen swords. Then one day, the humans had a baby, but Sgorr snuck into the human's home and stole it. He brought the baby to one of the many small islands dotting the Scottish coast. There he killed the child and ate its heart. He believed that by killing the infant, he would gain humanity's power and become stronger than humans. When the herd discovered that Sgorr had committed such a heinous crime, they banished him. During his exile, Sgorr was attacked by a wolf and lost his left eye.

Captain of the Draila

After wandering the Scottish wilds for some time, Sgorr came to the Home Herd in the lowlands. There he met Drail. Drail had been the leader of the herd for three years, but the power had corrupted him and he introduced new laws into the herd that made him more closely resemble a dictator than a true leader, such as outlawing Anlach, the yearly battles between male deer to decide the next herd leaders. Sgorr was made captain of Drail's personal spy and military unit, the Draila. The Draila quickly became rivals of the Outriders, the official military of the herd and its protectors. Sgorr believed he had finally found allies to take his revenge on Herne and make all Deer as violent as humans, but as time went on, he found that Drail lacked his ambition for conquest and violence and seemed more interested in ruling, so Sgorr plotted to overthrow his master. He began by influencing his master and Drail almost became a mere puppet for Sgorr. Then one night, Sgorr's personal rival Brechin became a father. The fawn was born with a birthmark shaped like an oak leaf. This birthmark was connected to a prophecy that Drail feared as it could end his rule of the herd.

The prophecy says "When the Lore is bruised and broken, Shattered like a blasted tree, Then shall Herne be justly woken, Born to set the Herla free.

On his brow a leaf of oaken, Changeling child shall be his fate. Understanding words strange spoken, Chased by anger, fear, and hate.

He shall flee o'er hill and heather, And shall go where no deer can, Knowing secrets dark to the Lera, Till his need shall summon man.

Air and water, earth and fire, All shall ease his bitter pain, Till the elements conspire To restore the Island Chain.

First the High Land grass shall flower, As he quests through wind and snow, Then he breaks an ancient power, And returns to face his woe.

When the lord of lies upbraids him, Then his wrath shall cloak the sun, And the Herla's foe shall aid him To confront the evil one.

Sacrifice shall be his meaning, He the darkest secret learn, Truths of beast and revealing, Touching on the heart of Herne

Fawn of the moonlight ever after, So shall all the Herla sing. For his days shall herald laughter, Born a healer and a king"

Brechin's mate Eloin, fearing for her child's safety, with the help of Bracken, another doe who had a stillborn fawn, switched the two fawn. At the same time, Sgorr and his Draila killed Brechin. The fawn, Rannoch grew up under the very noses of Drail and Sgorr, but one day, Draila spies discovered the mark. Sgorr then kidnapped the herd's storyteller Blindweed to learn about the prophecy, but was only told an incomplete version. Rannoch, Bracken, and a group of their friends had to run away for their safety. Draila were sent after them, but had no success.

Rise to Power and Downfall

After a whole winter, Drail's age was catching up fast and Sgorr saw it has his chance to seize power. At the same time, he learned that Bracken's faun was stillborn, and thus he had been tricked by Blindweed, and that the calf he was searching for was Eloin's and Brechin's. He kidnapped Blindweed again and tortured him until he revealed fawn's name was Rannoch. Satisfied by the information, Sgorr killed Blindweed. Ten days later, he revealed to Drail the truth Eloin had been hiding and Drail become utterly paranoid, just as Sgorr had planned.

Later, Sgorr, tricked Drail and Eloin into coming to a cliff under the lie that a herd leader, Colquhar desired to pledge loyalty to Drail. Drail, now dominated by his fears reluctantly agreed to leave the safety of the herd to meet a potential new servant. Upon arrival, Sgorr revealed his true nature and pushed Drail off the cliff and crowned himself "Lord of the Herds." He then ordered the new second in command Narl to kill all of Drail's sons. He even arranged for the real Colquhar to bring back Rannoch's friends and their own families, and Bracken back to the home herd, believing Rannoch to have been killed in a hunt. As Bracken and the others were brought back to the herd after meeting Sgorr, he ordered that Bracken be killed. However, Rannochs now full grown childhood friends, Tain, Thistle, Bankfoot, Peppa, and WIllow, with the help of their mothers, successfully escaped from Sgorr. Enraged by this, Sgorr ordered all but two of the does killed.

Under Sgorr's iron hoofed rule, the Herd began conquering other herds and killing any who resisted, the Draila were renamed the Sgorrla. Sgorr also held special "Schools" for fawns where he would teach them to be unquestionably loyal to him and even spy on their parents "For the good of the herd." Whenever deer in the herd became too old or sick, his Sgorrla escorted them away from the herd, broke their legs, and left them to die at the hands of carnivores. He also frequently tried to win Eloin's love but was rejected every time. Sgorr also sealed off the High Lands so no deer could enter them, find Herne's Herd and learn of his secret.

Sgorr did not take Rannoch or the prophecy seriously as he believed Rannoch to be dead and Herne a lie. But after forcing to loyalty's of countless herds and enforcing his law on other animals, Rannoch and his friends along with an army of deer who resisted Sgorr finally returned. Rannoch's journey lasted for years and consisted of discovery, learning the truth about his mother, growing up and learning the truth of Sgorr, and even living with humans. A massive battle was fought between the Outriders and the great herd in which two of Rannoch's friends were slain. But Rannoch, finally accepting the prophecy turned the tide by using fire, and even recruiting crows and wolves to aid the Outriders. Sgorr's great herd was defeated and Sgorr fled to the mountains to a high peak. There he pushed a boulder toward the end intending to crush Rannoch. But just before he could push it over, an arrow struck Sgorr in the throat and the Lord of Herds fell to his death. He had been shot by a hunter who in his youth knew Rannoch when he lived with humans for a while. Afterwards, the Great Herd was disbanded and freedom was restored. Sgorr's body was presumably brought back to the human settlements and eaten. 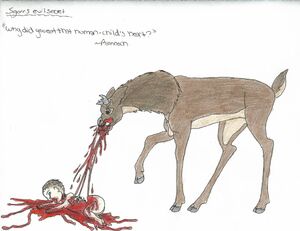 Sgorr killing the human baby and eating it's heart. 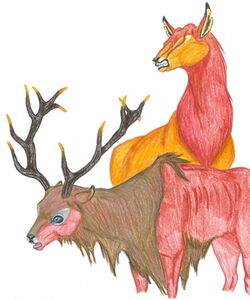 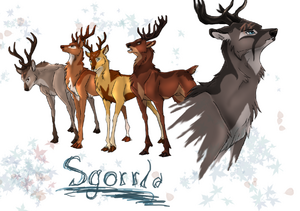 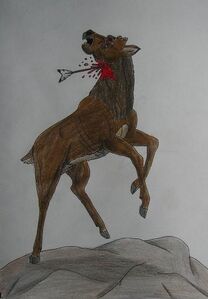