Carrying luggages for the group.

Aid Xuanzang to the West (succeeded).

Sha Wujing, also known as Sha-hesang (in Chinese: 沙和尚, the "sand priest"), is one of the main protagonists of the 1592 classic Chinese novel Journey to the West by the late Wu Cheng'en, and its multiple adaptations. However, during his first appearances in the story, he is a villain, though this was short-lived and he soon became a hero once joined Xuanzang's group.

In the classic 1986 series, he was portrayed by the late Yan Huaili, who also played the Bull King during the latter's earlier scenes in the same series, in season 1 and Liu Dagang in season 2.

As a demon in Liusha-he, Sha Wujing has a red beard and his head was partially bald, wears a necklace consisting of skulls. As Xuanzang's student, he has black hair, wearing a Buddhist pilgrim's robe. He often carries the weapon he had in Heaven, a magic wooden staff created by Lu Ban. Wujing's appearance is considered to be ugly and terrible, to the point that seeing him could scare a normal mortal human.

As a demon in Liusha-he, Sha Wujing is a typical barbarian who likes to capture and eat humans, without any mercy. However, as Xuanzang's follower, Wujing was actually kind-hearted and loyalty, and likely the most polite one among the three.

Like Zhu Bajie, Sha Wujing was originally a general in Heaven, a Curtain-Lifting General (卷帘大将). For unknown reason (most sources said it was an accident), he destroyed a valuable vase of the Jade Emperor, caused the latter to exile him to Earth, where he was to be reincarnated as a terrible man-eating sand demon, he lived in the Liusha-he (流沙河, "flowing-sand river", or "quicksand-river"), captured and ate humans days by days. Among his victims, there are nine monks, whose skulls kept floating on the river, instead of sinking into the river like others. Due to this, he strung them into a necklace with a rope and played with them whenever he was bored. At one point, he met the Bodhisattva Guanyin and was told by her to wait for being the monk Xuanzang's student and guardian, in order to make up for his past crimes. She also gave him the name Sha Wujing.

When Wujing finally met Xuanzang, he was mistaken for an enemy and attacked by Sun Wukong and Zhu Bajie. Afterwards, with Wukong's request, the Bodhisattva Guanyin arrived to clear things up, and Wujing finally became the third student of Xuanzang, who called him Sha-hesang, gave him a Buddhist pilgrim's robe. Sha Wujing then turned his skull-necklace into a boat to help the group travelling across the Liusha-he.

From that point onwards, Sha Wujing is now a hero. 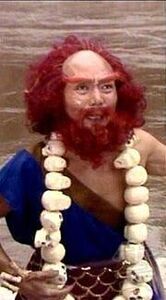 Sha Wujing when he was still a demon in Liusha-he. 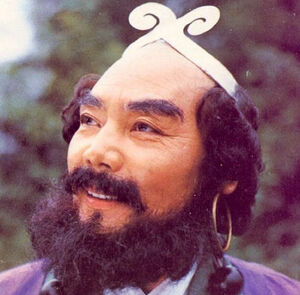