Defeat Flash and the Justice League.

Richard Swift, better known as Shade is a villain later turned anti-hero from the DC universe. He was a common enemy of the Flash but also one of the only villains that has respects from Flash and the other heroes.

The Shade was a common thief who could manipulate the shadows with his cane. He fought both incarnations of the Flash, Jay Garrick and Barry Allen.

The Shade was later a member of an incarnation of the Wizard's Injustice Society, Injustice Unlimited. They overcame the security at the International Trade Conference in Calgary, Canada — namely Infinity, Inc. and a contingent of the Global Guardians — and forced the heroes to help in some mayhem. The Shade took Fury to Athens and, with her help, stole a piece of the Altar of Erebus from within the Hill of Ares (the Areopagus). After a brief brush with the Olympian the Shade and Fury returned to Calgary, the Shade to share in the stolen wealth being gathered by the Wizard. But the plan went haywire when Hourman revived and freed himself, as well as when Solomon Grundy was brought in from the Arctic Circle. It was the Green Flame who incapacitated the Shade, and after the confusion he was taken into custody by Canadian law enforcement. Later the Shade literally kidnapped the city of Keystone City (including the Flash (Jay Garrick) and the city's entire population) into a parallel dimension where he kept his prisoners in suspended animation for nearly thirty years, before Garrick's successor Barry Allen rescued his namesake and the city from the Shade's clutches.

After the events of Zero Hour, the universe was substantially altered as a result of Hal Jordan's plan to recreate the universe. The Shade was one of the individuals most affected by Zero Hour, as the time and space warping nature of Jordan's scheme changed the Shade's personal timeline and indeed his very being. No longer a generic villain with a magical cane, The Shade was now the morally ambiguous English gentleman turned immortal named "Richard Swift". Shade's powers were retconned as being internal and not based from his cane. Able to tap into a horrific alternate dimension of shadows, which he could manipulate and shape into whatever form he wanted similar to. A man of wealth, Shade traveled within the literary circles of the Victorian Era England, befriending author Charles Dickens and Oscar Wilde.

As time passed, Swift began using aliases for himself such as "Mr. Black", and went by "Shade" to those he was on good terms with. He also developed enemies, such as the mysterious dwarf Simon Culp, who like Shade was immortal and had the same darkness energy powers as Shade. Other enemies included the murderously corrupt Ludlow family, who Shade had all but wiped out when the family manipulated Shade in order to murder him for sport, with the surviving generations of the family vowing revenge on the Shade.

The Shade fled back to England during the early days of World War II, to aide the Allies in fighting the Nazis. While on patrol with the British hero Captain X, Shade was ambushed by Culp when a bomb fell from a German fighter plane onto the two men. To survive, Culp was forced to seek shelter by literally merging with an unknowing Shade.

When the age of costumed heroes began and unknowingly influenced by the malevolent Culp, Swift decided to give himself the name "The Shade" (added a 'the' to his nickname) in 1942. Downplaying his formidable shadow powers, Shade committed crimes in various cities, most notably Keystone City, where he found himself a nemesis in the form of the Flash, Jay Garrick. The Shade would privately refer to his battles as "the joust", which he engaged in for the simple thrill of combat with another super-powered combatant.

Despite his turn to super-villainy though, Opal City remained untouched by Shade as the villain considered the city he lived in off-limits. Indeed, The Shade has been known to be protective of Opal City, to the point of using his powers to kill any criminals who attempt to commit crimes in the city. The Shade even would engage in the occasional super-hero battle, saving Howard Hughes from the villainous Johnny Sorrow. However, Culp slowly began to fight Shade to gain dominance of Shade's body, culminating in the Shade believing that Culp was alive and plotting against him and ultimately to him and Dr. Fate teaming up to find Culp, never knowing that the villain he was seeking was inside his stomach. Shade would later team up with the Mist to murder the retired super-hero Invisible Hood, though it is unknown if Culp was responsible for this act of murder.

Jack Knight became the new Starman after the death of his brother David and united with Shade to save Opal City from the Mist and his family's reign of terror that threatened to destroy the city Shade had made into his home. Having returned to the United States and effectively retired since the Injustice Unlimited fiasco, Shade took an interest in Jack Knight and offered to mentor the man who helped save Opal City from the Mist. Jack would be privy to the Shade's diaries, learning much of his life and new backstory as well as his opinions on the various men who used the Starman moniker. Though many in Opal were distrustful of the Shade, he slowly won the trust of many in the city though Culp, furious at how the Shade had rejected evil, finally assumed full control over Shade's body. Gathering an army of villains who Jack Knight had battled over the course of his heroic career, Culp (in Shade's body) cast a spell that allowed him to trap everyone inside Opal City using the shadow powers he possessed and began to destroy the entire city before Starman and the Shade (who ultimately expelled Culp from his body) opposed him. Ironically it would be the Shade's former ally the Mist who would kill Culp, as Mist sold his soul to Neron to restore his mind (nearly gone due to Alzheimer's Disease) in exchange for his killing the Shade. However, Ted Knight would sacrifice his life to save Shade and Opal City from Mist's final rampage.

The Shade learned about Prometheus' conspiracy in ordering a series of attacks on various superheros and informing this news to his old rival Jay Garrick. He then accompanies Garrick to the Justice League Watchtower to warn the other heroes, but arrived too late to find Prometheus already there. After Garrick was incapacitated by Prometheus, Shade was able to hold off the villain (as he is technically not a "hero", meaning Prometheus has no file on how to stop him), and ultimately ends up stopping Donna Troy from killing the supervillain after he has been beaten into submission. However, Shade later creates a portal that gives Green Arrow access to Prometheus' otherdimensional lair, where the archer kills Prometheus in revenge for Star City, the dismemberment of his former protege Red Arrow, and the death of Red Arrow's daughter.

During the Blackest Night, Shade was in a relationship with Hope O'Dare, and claims that he is in love with her.. After a night of sex, Shade and Hope are confronted by David Knight, reanimated as a Black Lantern. David rips out Shade's heart, but, due to his powers, he survives, unable to be killed and resisting the call of a black ring that seeks to turn him into another undead. After David threatened to kill Hope and later his brother Jack, an enraged Shade used his powers to trap the Black Lantern within the Shadowlands after decrying the Lantern as a mockery and a fake, saying he has "no light of his own", and uses his own heart as a channel to bind and banish him. Afterwards, Hope admits that she loves Shade as well, and the two lovers depart from the scene of the battle. Possible futures In one possible future, The Shade's became the protector of a utopian planet several thousand years into the future; in which he still enjoys telling tales of his past. 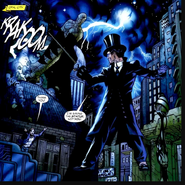 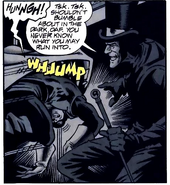 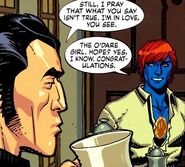 Darkness Manipulation: The ability to control darkness. His powers were revealed to be a connection to the Shadowlands (or Dark Zone), a dimension of primordial, quasi-sentient darkness which Shade, as well as other characters with similar powers, can channel for various effects. Swift, perhaps due to age, seems to be the most powerful possessor of Shadowland (Dark Zone) given powers.

Immortality: Swift is an immortal not tied to a type of magic. The only time he lost his immortality was briefly in the second series of Starman, when Simon Culp broke away from him. However, it appears the only way he can lose his immortality is if he loses his shadow, which would require someone from likely the same event back in 1838 meeting up with him (very unlikely). He is highly resistant to attacks of all kinds, and survived a direct bomb fall on top of him, appearing only slightly dazed.