He was a henchman of the crime lord Diamondback. After a business associate of Diamondback's, the Harlem gangster Cottonmouth, is betrayed by some of his men, Diamondback sends Shades in good faith to assist him in cleaning up the mess. After Cottonmouth's death, Shades becomes the main henchman and lover of Cottonmouth's cousin Mariah until he loses his faith in her as well, owed to Mariah's complete ruthlessness and loss of morality. To undo the damage Mariah has wrought, Shades surrenders himself to the police to testify against his former lover and partner in order for immunity against the crimes he reveals during his testimony. Nonetheless, he is arrested and imprisoned after Mariah's death renders his testimony void.

He was portrayed by Theo Rossi.

While imprisoned at Seagate Prison, Shades became friendly with the cruel warden. While in the yard, the warden pointed at Luke Cage, telling Shades that Luke is a former police officer. That night, Shades and another prisoner enter Luke's cell and start beating him up. Luke overpowered both of them and threw them out of his cell. The warden sadistically watched this but did not engage.

By using Shades, the warden blackmailed Luke Cage into joining the warden's illegal fight club, threatening that Shades would kill those Cage cared about should Cage not comply. After Cage behaved suspiciously, the warden sent Shades after Cage's friend Squabbles and interrogated him about Cage's plans. They found out that Cage planned to expose the warden and that he meant to leave their fight club.

Afterwards, Shades approached Luke. He and another prisoner, Comanche, revealed that they were aware that Cage was about to leave the fighting game. The two once again started attacking Luce and this time, were able to beat him up and severely hurt him.

After a deal between Cottonmouth and other gangsters has gone wrong, Shades' employer Diamondback, who provided Cottonmouth with high-tech guns, sends Shades to help Cottonmouth in his attempts to get back his money. Shades arrives at Cottonmouth's office and bluntly tells him that after the botched deal, the weapons are in a police lockup and that the money is gone. Shades wants to know whether it was an inside job and Stokes replies that it was most certainly not, reminding Shades that he needed the money too. Cottonmouth is concerned, believing that Diamondback wants to take over his operation. Shades, however, assures him that this is no takeover and offers his help in solving the problem.

After meeting with his cousin Mariah, Cottonmouth speaks to Shades and another henchman. The henchman confirms that Dante, whom he found dying at the scrapyard where the deal went wrong, was one of the men who attacked the deal. Dante also gave up the names of two who were with him. One of these boys is invited to the Harlem's Paradise, where the henchman brings him to Cottonmouth. When Shades enters the club through the kitchen, Cage immediately recognizes Shades, who in turn does not recognize Cage. Shades heads up to Cottonmouth's office, where he witnesses Cottonmouth beating the boy to death. Afterwards, he is tasked by Cottonmouth to get rid of the body and to find and bring him his money. Cottonmouth's men then start hunting the boy Chico, the last of the three attackers.

While Pop and Cage are talking about Cottonmouth and the deal in Pop's Barber Shop, they are surprised when the very same turns up to get shaved. While Pop is shaving Cottonmouth, Cage has to control his anger in order to not attack Shades immediately. When he clenches his fists so hard that the broom he is holding breaks in two, Shades briefly looks up, only to comment that it is a cheap broom. Shades then starts a conversation with Cage, telling him that he just came home from a three-year stretch in prison. He claims that he grew up in this very neighborhood and then inquires whether Chico is still around, claiming that he knows him from his youth. Cage gives no real answer, telling him that people come and go. As they turn to leave, Shades reminds Pop and Luke to call out if Chico is seen. With Cottonmouth's assistant, Shades meets with an informant who tells them that Chico is inside Pop's Barber Shop. The two then drive up next to the Barber Shop and shoot up the store from outside. Pop is killed by the bullets but Chico, who is wounded, and Luke play dead. Shades and the assistant enter the barber shop, grab Chico's backpack and flee, Shades muttering that they should have waited.

After Cottonmouth has lost all his money, Shades advises him to sell the nightclub to get back at least some of his money. Cottonmouth refuses, claiming that this place is his blood and his legacy. Looking into the nightclub from his office, Cottonmouth sees that Cage has arrived. Watching Cage beating up the goons, Shades recognizes his enemy from the prison. After Cage has left, Cottonmouth asks Shades from where he knows Cage and Shades replies that it is a long story. Cottonmouth claims that he will make time.

After Cage is gone, Shades shows him video footage of a special ammunition, called "The Judas", which is incredibly strong, even against bullet proof vests. Cottonmouth is interested, but the price is much to high for Cottonmouth to afford at that point. Cottonmouth tells Shades that Diamondback can front him on the payment, but Shades replies that Cottonmouth made too many mistakes to receive credit from Diamondback.

After Cottonmouth is arrested by the police but released due to lack of evidence, he returns to his night club, where he is awaited by Shades. Although Shades is worried, Cottonmouth is in high spirits as he murdered a cop and got away with it. He also reveals to Shades that, after he shot Scarfe, his men returned to the warehouse, got the weapons and brought them to Domingo. Shades, however, tells him that he still won't get money from Diamondback, as he has too much attention on him right now. Nonetheless, Cottonmouth tells Shades to organize a meeting between Diamondback and Cottonmouth.

Shades later meets with Cottonmouth's cousin Mariah. Shades claims that in the past, the name Stokes meant something and that Cottonmouth is on his way to drive this reputation into the dirt. Indeed, her reputation is tarnished enough that Mariah is called by her party chair who demand her resignation.

Mariah later visits Cottonmouth in his office and, during a heated argument, kills him by throwing him out of the office window into the club and mauling him to death with a microphone stand. Moments later, Shades arrives. He is delighted by the sight, having lost faith in Cottonmouth, and tells her that they will blame Luke Cage for Cottonmouth's death. He then helps Mariah clean up and remove evidence. After all is done, Shades takes over the club and Cottonmouth's gang in Mariah's name but is swiftly disowned by Diamondback, who takes over the operation. Knowing that Diamondback will kill him should he find out that not Luke Cage, but Shades and Mariah are responsible for Cottonmouth's death, Shades visits Mariah and urges her to find Cage.

Shades assists Mariah when she takes over her brother's empire. He advises her and helps her stand up to the other crime bosses. When the meeting between Mariah and the crime bosses is interrupted by Diamondback, who kills all bosses except Mariah, Shades keeps quiet.

While Mariah is holding a speech in the Harlem's Paradise, rallying the people against Luke Cage, Diamondback is attacked by Detective Misty Knight. He shoots at Misty, who is saved by Cage. When Shades arrives at the club, he finds complete chaos and people fleeing from gunshots. After being briefed about the situation, Shades advises Diamondback to leave immediately as the police will arrive any moment, Diamondback reveals that they will stay until Cage, who has escaped into the kitchen and barricaded himself, is dead. Diamondback tells his men to take everyone who remained in the club as hostage.

Shades then tries to convince Diamondback to retreat, also claiming that Diamondback lost his nerve as now, people are aware that Diamondback shot a female cop who was then saved by Luke cage, who was running from the bullets. Diamondback replies that all that people will remember from the confusion is that Cage turned up and everything got messy. Not the least convinced by Diamondback's plan, Shades asks how exactly he plans to hold of the policemen who will arrive any moment. Smiling, Diamondback tells him that he will be Luke Cage. To break into the kitchen where Luke is barricaded, Diamondback shoots at the door with a grenade gun. However, Luke Cage and Misty have fled into a cellar beneath. While searching the kitchen, Shades is worried that they are making far to much noise. Diamondback insists that they continue the hunt.

Much later, while Diamondback is facing Cage, Shades finds the entrance to the secret cellar. He finds Misty Knight and Claire Temple and attacks the two. However, the two are able to fend him off and Claire knocks him unconscious by smashing his head into a valve. Misty then uses her handcuffs to chain the knocked out Shades to said valve. After the hostage situation has been dissolved, Shades is arrested by the police. While he is led outside, Claire demonstratively steps on his glasses.

At the police precinct, Shades is interrogated but does not yield any information and insists on a lawyer. A two million dollar bail is swiftly paid and Shades is released and returns to Diamondback's side. While in an elevator, one of Diamondback's henchmen strangles him from behind on Diamondback's orders but Shades grabs a gun from another man's belt. He forces his wanna-be-killer to bring him to the roof where the man begs for his life, claiming that he was just following orders. After finding out that Diamondback wants him dead, Shades shoots the henchman and grabs the man's sunglasses before leaving. Shades heads to Mariah's house, and the two team up to defeat their mutual enemies. Shades also plans to bring Cage to the table, so that they could send Cage against Diamondback. The two visit Luke Cage in Pop's Barber shop where they propose a truce. Cage is more than hostile and refuses at first but Shades then offers him files which contain evidence that Diamondback committed the crime for which Cage went to prison, thus offering Cage back his life.

When Misty Knight as well, the talks are disrupted. Even more chaos is created when a grenade explodes outside the shot and Diamondback himself arrives in a futuristic armor suit. Shades shoots at Diamondback who is not affected. Shades and Mariah flee to the back, pursued by Misty, while Luke engages Diamondback. After escaping to their car, Shades realizes that they left the folder containing Cage's files in the barbershop. Furthermore, Mariah realizes that Misty will arrest her and that there is no way around this. Nonetheless, she calls her assistant to call in the media, planning to spin her situation around somehow. While Diamondback battles Cage, Shades contacts the witness with the phone Misty lost at the barber shop. He arranges a meeting with the witness, acting as if he was Misty, and shoots her. This allows Mariah to walk from the police uncharged.

Shades picks up Mariah from the police precinct, handing her a handgun that formerly belonged to Cottonmouth, implying that she will take over her cousin's criminal empire. Shades remains at Mariah's side. 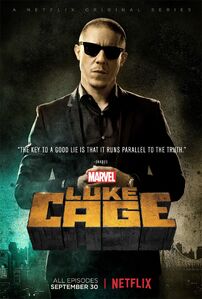 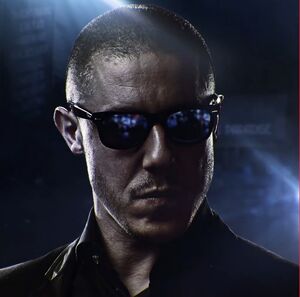 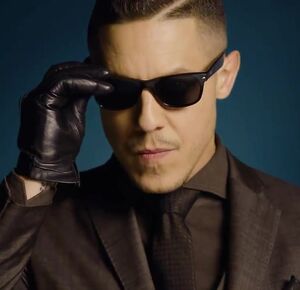 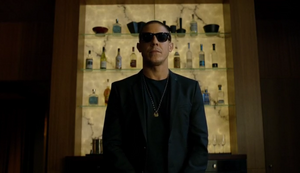 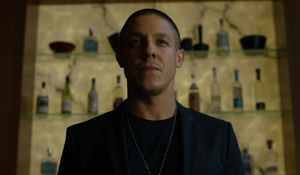 Shades without his glasses 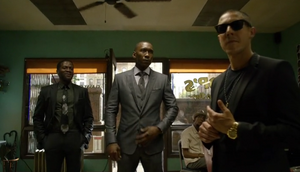 Shades and Cottonmouth arrive at the Barber Shop 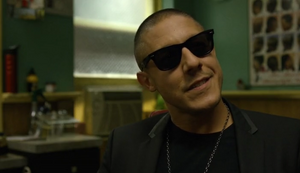 Shades talks to Luke at the barber shop 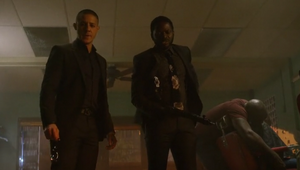 Shades and Cottonmouth's assistant after attacking the barber store 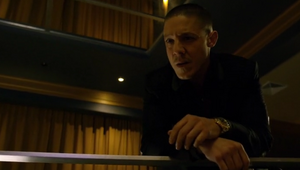 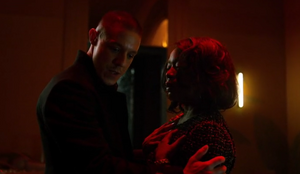 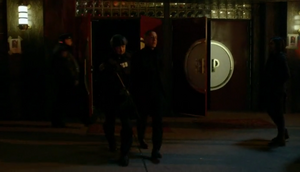 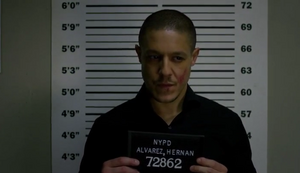 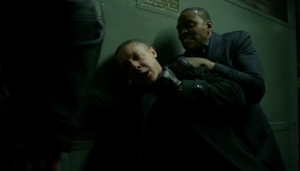 Shades is almost strangled by Zip 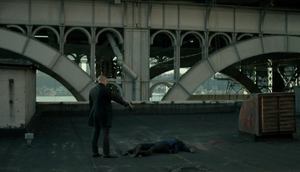 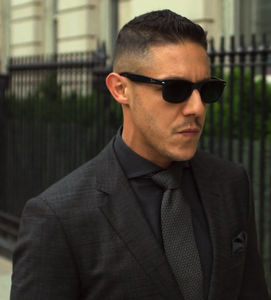