Uses a device called the Dimensionmeter that grants: Ability to shift his body into a two-dimensional, and intangible, shadow state and draw strength from the shadows around him

Steal Hawkman and Hawkwoman's ship.
Defeat the Justice League of America with the help of the Injustice League (all failed).

Shadow Thief is a supervillain in the DC Comics universe and is an enemy of Hawkman, Hawkwoman, and the Justice League of America. Three individuals have used the Shadow Thief persona. They are Carl Sands, Carl Hammer and Aviva Metula. Shadow Thief (Carl Sands) uses a device called the Dimensionmeter that allows him to turn his body into a two-dimensional shadow, draw strength from other shadows, and touch objects in shadow form.

Carl Sands was a career criminal who was conducting experiments on shadow projection while in jail. Because his shadow betrayed him to a policeman while he was robbing the safe in a store at night he was trying to make his shadow work for him. The experiments allowed him to make contact with an alien explorer named Thar Dan from the Xarapion dimension. In return for saving the creature's life, Sands was given a device known as a Dimensiometer and a pair of ebony gloves that allows him to hold objects while in shadow form.

Hawkman eventually defeats him, but Shadow Thief would come into conflict with him many times after that. He would later become a member of the Injustice Gang which came into conflict with Hawkman and his allies, the Justice League of America. Eventually, the Phantom Stranger had him permanently stripped of the Dimensiometer

While Carl Sands grew up in Japan, he learned ninjutsu techniques and became a rather undistinguished industrial saboteur, accepting unremarkable sums to hinder and eliminate his clients' rivals.

His pre-Crisis history remained canon, including his brief membership in the Injustice Gang. However, he has instead fought with the Golden Age Hawks rather than the Silver Age Katar and Shayera Hol.

Sometime after losing the belt to the Phantom Stranger, the Thanagarian criminal Byth hires Sands to steal Hawkman and Hawkwoman's ship. To help Sands with this job, Byth gives him a shadow suit - a Thanagarian belt device/"shadow vest", which gave Sands the ability to shift his body into a shadow form (based on Thar Dan's Dimensiometer).

He sells his soul to Neron for more power. The demon gave him a more powerful shadow suit with the ability to turn other people and objects into shadows.

Shadow Thief has entered into the employ of St. Roch art trader Kristopher Roderic. Sands has been sent to the ends of the Earth in service of Roderic's dark aims, and is hopeful that the unscrupulous collector will help him with a problem of his own.

During the events of Identity Crisis, Shadow Thief became deranged and began having delusional conversations with the Dimensiometer. He ended up killing Firestorm (Ronald Raymond) with Shining Knight's mystically enhanced sword. For killing Firestorm, he was prosecuted by Kate Spencer (a.k.a. Manhunter IX).

Shadow Thief later popped up as a member of the Injustice League, and is one of the villains featured in Salvation Run. After this, Shadow Thief becomes a member of Libra's Secret Society of Super Villains. He later joins forces with Starbreaker, and uses the power of Shadow Cabinet's "Shadowslide" teleportation system to temporarily increase his own powers.

Prison only temporarily stops him as he uses the shadows created by the interior of his mouth to escape by blinding and muffling Doctor Light when she comes to interrogate him. He is ultimately defeated by Light, and is rendered powerless after Firestorm uses his powers to seal up his mouth, thus preventing him from conjuring shadows from within his body.

During the events of Brightest Day, the cosmic entity known as the Starheart begins taking control of metahumans who possess magical or elemental abilities. JSA members Lightning and Mister America are sent Alcatraz to check on Sands, and find him babbling on the floor of his cell in the fetal position, driven insane by the Starheart's power.

The second Shadow Thief is Carl Hammer. Mr. Hammer and his brother Carl Hammet had competed their whole lives, each trying to outdo the other. Carl even changed one letter of his last name to separate himself. Their rivalry grew into a bitter hatred between the brothers. The final straw came when Hammer purchased a shadow suit and tried to kill Hammet. Vigilante intervened and was forced to kill Hammer in self-defense.

Hammet later gloated to himself how he had arranged the circumstances of Hammer acquiring the shadow suit. He knew it would drive his brother mad and an assassination attempt would follow. Hammet had planned to use this opportunity to kill Hammer and claim self-defense. Since the Vigilante had done it for him instead it was all the better. Without his brother and competition, Hammet was free to conduct his business freely, with a shadow suit of his own.

Hammer states that he paid more than one million dollars to have the suit made. His one and only appearance was in Vigilante #14.

During the Forever Evil storyline, it is revealed that this version of Shadow Thief is a former agent of Mossad named Aviva Metula. Metula wears a suit of armor called the Shadow Skin that gives her powers. She became Shadow Thief in order to kill alien invaders, making her a dangerous foe for Hawkman. When Steve Trevor heads to the White House to find the President, he encounters Shadow Thief, Deathstroke, and Copperhead.

The Shadow Thief made an appearance in Elseworlds' JLA: Another Nail. He gained his abilities from Xaraponian technology. He was being chased by Hawkwoman and Zatanna. He opens a portal to Xarapon to escape, but he was apparently destroyed when the portal was affected by the temporal disruptions.

In issue #2 of the 1996 DC Comics miniseries Kingdom Come by Alex Ross and Mark Waid, a shadow appears between Obsidian and Lightning in a metahuman bar, in page 26 in the first panel. It is assumed to be the Shadow Thief.

In the alternate timeline of the Flashpoint event, Shadow Thief is imprisoned in military Doom prison. During the prison break, Shadow Thief is knocked unconscious by the corrections officer Amazo.

Shadow Thief appears in a flashback story in Justice League Beyond, set after the events of Justice League Unlimited. In the story, he returns to seek vengeance on Green Lantern, murdering his fiance, Vixen in cold blood. In retaliation, Green Lantern partners with Hawkgirl and Adam Strange in order to hunt down Shadow Thief. During a violent struggle, Green Lantern killed Shadow Thief once and for all with a gunshot to the head. He then left the villain's corpse to be devoured by a group of alien beasts. 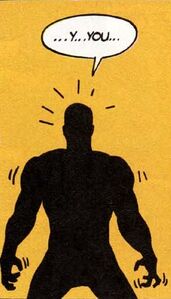 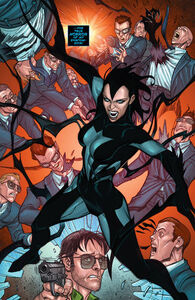 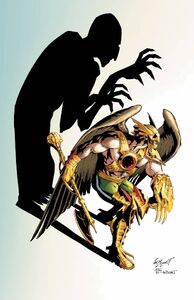 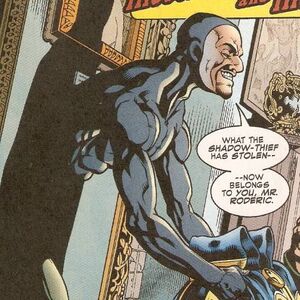 Shadow Thief without his shadow form 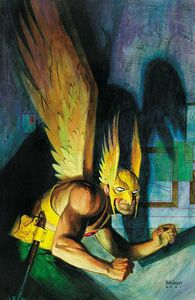 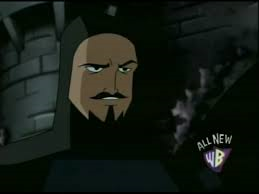 Shadow Thief in The Batman 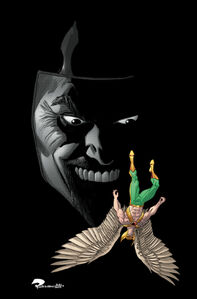 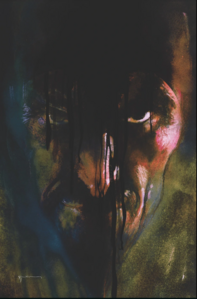 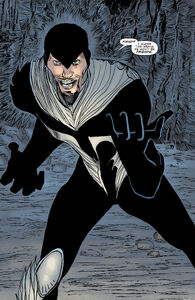 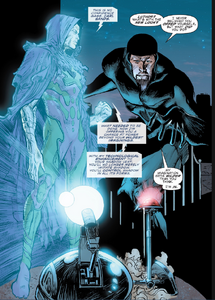 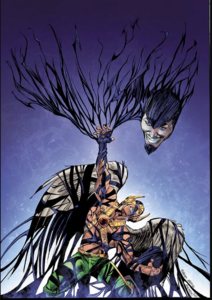 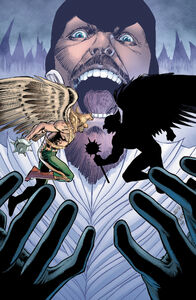 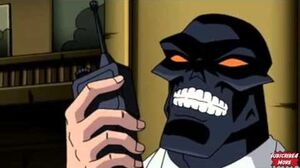 The Batman Hawkman Vs Black Mask Shadow Thief (The Batman) 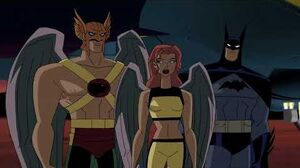 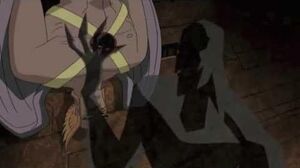 The great quotes of The Shadow Thief