The ShadowToyAgumon can not only fire Toy Flames, but they can merge into other toy objects like a tank and giant-like toys.

ShadowToyAgumon is a Rookie Level Digimon that's an evil version of ToyAgumon. Their entire body's made of black legos in a rough shape of Agumon. He greatly resembles a crocodile. 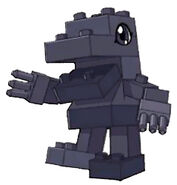 Retrieved from "https://villains.fandom.com/wiki/ShadowToyAgumon?oldid=3003157"
Community content is available under CC-BY-SA unless otherwise noted.