ShadowWereGarurumon is a minor villain in Digimon Frontier. He is an Ultimate Class Digimon that looks like a darker version of WereGarurumon. The only differences is his fur color is black with white stripes, his sleeve is brown and his jeans are green.

ShadowWereGarurumon was the reigning champion in the Trailmon race along with his Partner Doggymon. When the other Trailmon had no partners to team up with, because their former partners quit, the DigiDestined decided to join the race.

It turns out that both ShadowWereGarurumon and Dogmon cheat during the race. Doing so, J.P., Zoe, Tommy, and eventually Koji got kicked off the race because they got off the train tracks. Both of them fought Agunimon and Lobomon, until Agunimon was on his own.

When Worm (the name of Takuya's Trailmon partner) fell of the track, Agunimon slide evolved into BurningGreymon and used his interse fire to move Worm. Doing so knocked off Bull (the name of ShadowWereGarurumon's Trailmon Partner) and the other two. This event eventually got them disqualified from the race, so Takuya and Worm won the race. 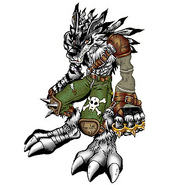 Retrieved from "https://villains.fandom.com/wiki/ShadowWereGarurumon?oldid=3541037"
Community content is available under CC-BY-SA unless otherwise noted.