Known world (Asshai and possibly other lands of the further east)

Two unnamed Shadow Assassins made by Stannis and born to Melisandre

Assassinate Renly Baratheon and Ser Cortnay Penrose (the two made by Melisandre and Stannis).

Shadows are a form of magic used by shadowbinders of Asshai, in Far East Essos, that appear in the universe of A Song of Ice and Fire . Red Priests think they are servants of the Lord of Light, as light is what casts shadows.

Melisandre and Stannis Baratheon had sex, with Melisandre promising to give Stannis 'a son.' After the failed parley between Stannis and Renly, Melisandre is revealed to be pregnant. She gives 'birth' to a shadow, that infiltrates in Renly's camp and cuts his throat in front of Catelyn Stark and Brienne of Tarth. Renly's Kingsguards, Loras Tyrell, Ser Robar Royce, and Ser Emmon Cuy blame Brienne for the murder of the king. A few houses from the Reach and almost all of the stormlands go in support of King Stannis I, while Loras flees back to the Reach with Randyll Tarly, Mathis Rowan, and Arwyn Oakheart.

After Renly's assassination, Storm's End is besieged by Stannis and his army. During the siege Stannis and Melisandre keep having sex in the camp. Ser Cortnay Penrose, who was left charge of the castle, refuses to yield Storm's End and Robert Baratheon's legitimized bastard, Edric Storm. Ser Davos Seaworth arrives after delivering Stannis' message to the realm, and at night sails with Lady Melisandre into a cave under the stronghold. She disrobes and Davos watches in horror  woman gives birth to a shadowy creature. As the shadow emerges Davos recognises the man who had cast it, Stannis. The shadow goes to slay Penrose, allowing Stannis to take Storm's End.

Davos is so disturbed by the appearance of the shadow creature, and he and another knight convince Stannis not to bring Melisandre along when their fleet and army attack King's Landing. The king agrees with them, as he doesn't want people to think he won the throne via sorcery. He sends Melisandre back to Dragonstone with Edric Storm.

Catelyn and Brienne were the only witnesses of Renly's murder. The event had scared them for a long time and keeps haunting Brienne's dreams. In Riverrun, Catelyn writes a letter to her son Robb, warning him about Stannis being a bigger threat than the Lannisters, as Stannis had promised to Catelyn, during the parley, that he would come for Robb Stark too. Catelyn was shocked and left immediately, abandoning any idea of talk with Stannis, thinking he made a deal with "dark evil forces".

In the novels it is unknown what was Stannis doing in private during his depression after losing the Battle of the Blackwater, but in the TV adaption, during the events of Season 3, Stannis is extremely depressed as well as angry and he asks Melisandre to make him another "son" to slay Joffrey as well as Robb Stark. However, she refuses him, explaining that creating a shadow-creature drains some of a man's life energy, and she fears that if Stannis attempts to create another with her it will kill him. Instead, she has Gendry brought to Dragonstone, since he also has king's blood, being the son of Robert Baratheon.

In season 5 she tries to make a shadow assassin with Jon Snow, but he refused. In the third book Melisandre admits to Davos that Stannis' fires now burn so low that she dare not draw off any more to make another son, as it might well kill him. She indicates she can make more shadow assassins with another man, implying Davos, but the prisoner rejects her offer, believing their union would only result in a horror.

The creation of two shadow assassins drained some of Stannis' life-force, making him look prematurely old (he was already described as old-looking despite being in his thirties), his hair turning grey and aging about 20 years. Furthemore, the creation of the shadows caused Stannis to have repetitive dark nightmares that only Melisandre can appease with sex (causing Stannis to have some kind of "addiction" to her). Stannis often dreams of killing Renly and Penrose through the eyes of the shadows. 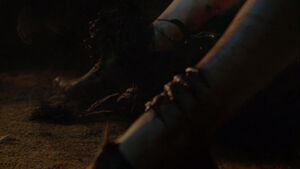 Melisandre giving birth to a shadow assassin.
Add a photo to this gallery

Retrieved from "https://villains.fandom.com/wiki/Shadow_Assassins_(ASOIAF)?oldid=4071052"
Community content is available under CC-BY-SA unless otherwise noted.