Convert Lin Kuei warriors into them.

The Shadow Assassins are minor antagonists in Mortal Kombat: Armageddon. They are a murderous band of demonic ninja warriors modified by Smoke to Noob Saibot's liking.

They were said to resemble the warriors of the Lin Kuei clan.

Later, the Shadow Assassins attacked the Lin Kuei Temple to "convert" the Lin Kuei warriors into his followers and to seek revenge against his younger brother Sub-Zero.

Standing in their way was the Edenian demigod Taven who battled these invaders before taking on their leader Noob and saved his brother.

Some of their numbers within the Shadow Assassins were transformed humans who were subjected to the nanotechnological powers of Smoke as well as to the dark magical powers of Noob Saibot. Their powers allowed them to appear from foggy smoke allowing them to suddenly appear and ambush their foes. They were typically armed with maces and knives. In addition to this, they were capable of shooting out red skulls through dark magic at their enemies. 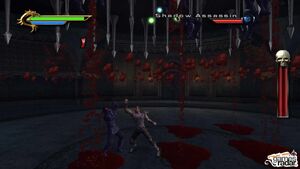 Taven fights off against the invading Shadow Assassins in the Lin Kuei Temple before facing their leader Noob Saibot. 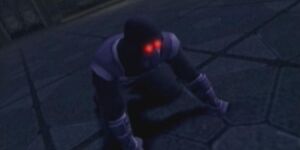 A Shadow Assassin upon his finished transformation.