Absorbing Paint from all cartoons

Destroy Wasteland and escape it as a cartoon star with Mickey's heart (failed).

He is a mixture of paint and thinner that was accidentally created by Mickey Mouse. He is considered to be an alternate form of the Phantom Blot. However, there is almost nothing to prove this except for his color and similar name.

He was voiced by Frank Welker, who also played Megatron in Transformers: Prime, the singing voice Percival C. McLeach with Joanna the Goanna in The Rescuers Down Under, Stripe in Gremlins, and Rhino in James and the Giant Peach.

Nobody is given much hindsight of the Blot's personality, but it is shown to be ruthless in its goals to escape Wasteland and enter the Cartoon World, kidnapping Oswald and Gus and bargaining for their lives for Mickey's heart, the only thing the Blot needed to escape Wasteland. In The Art of Epic Mickey, it is revealed that the Blot craves love, a shape, completion and an audience like other toons, as it was denied these things at birth; it even goes as far as to say that the Blot "isn’t evil by itself". However, it then says that "the Blot pursues these goals ruthlessly", meaning the Blot isn’t afraid to kill to get what it believes it deserves. Its personality is actually similar to both Mickey's and Oswald's personalities, seeming to reflect Mickey's carelessness and irresponsibility (as Mickey not only created the Blot but left it in Wasteland and pretended it was a silly memory), and also seems to reflect Oswald's resentfulness and craving for fame, as both hate Mickey due to some reason - Oswald hates Mickey cause he believes Mickey stole his life, while the Blot hates Mickey because he abandoned him, and both seek popularity and fame. The difference between the three, however, is Mickey has learned to control his irresponsibility and Oswald isn’t willing to destroy everything in his path to reach his goals of becoming popular again.

Mickey found Yen Sid while he was creating the Cartoon Wasteland for Oswald and other forgotten cartoons. After Yen Sid was finished and put down his magical paintbrush, Mickey used it to attempt to create a statue of himself out of Paint, it started to drop so Mickey kept adding more and more Paint until the statue came alive as the Blot and attempted to attack Mickey before Mickey attacked it with Thinner and sucked it into a sponge, Yen Sid was coming back so Mickey quickly escaped, not noticing the Blot survived and leaped out of the sponge into Wasteland.

After that, the Blot entered the Cartoon Wasteland and began attacking and devouring the residents. Not willing to give up, Oswald, Ortensia, and other forgotten toons started fighting back against the Blot, commencing the Blot Wars.

Sadly, despite their efforts, the Blot wins, partially due to the Mad Doctor's betrayal. However, Oswald and Ortensia refused to give up and attempted one final assault on the Blot on top of Mickeyjunk Mountain, managing to successfully trap it in Yen Sid's Thinner bottle that also dropped into the Wasteland. However, it didn’t come without sacrifice, as before his entrapment, the Blot sucked Ortensia of all her Paint, leaving her a lifeless statue frozen with fear and leaving Oswald depressed, however, the Blot's Prison Bottle wasn’t completely sealed, allowing drips to escape and become the Blotlings, the most powerful of them being the Shadow Blot.

For most of the game, the Blot remains trapped in the Prison Bottle on top of Mickeyjunk Mountain.

However the Shadow Blot rallies the Blotling army and attempts a full-scale assault on the Mountain in an attempt to free the Blot, Mickey either erases or redeems the Shadow Blot and helps Oswald fix the cork. Oswald then reveals the Shadow Blot that Mickey fought was actually not the real Blot, just a drip of it.

Mickey and Oswald then are about to shake hands when Mickey then reveals he is the one who created the Blot; Oswald, completely enraged, gets on top of the cork and wishes to fight Mickey, however, his weight causes the cork to crack and break, freeing the Blot who then kidnaps both Oswald and Gus, holding them for ransom for Mickey's heart. Mickey, not wanting them to die from either suffocation or the Blot crushing them, gives up his heart. The Blot then gives up both Oswald and Gus before cackling and creating the Bloticles which began absorbing all the Paint in Wasteland and feeding it to the Blot.

Oswald becomes even more depressed, stating that as long as the Bloticles feed the Blot Paint it can regain its strength. However, Mickey reassures Oswald that he will deal with the Bloticles while Oswald repairs the rocket, Oswald regains hope and goes to repair the rocket while Mickey goes to fight the Bloticles, which are being protected by the Blotling army.

Once Mickey deals with the Bloticles and helps Oswald finish the rocket, he, Oswald and Gus fly towards the Blot, Oswald making a plan to head straight towards Mickey's heart and use the self-destruct to destroy the Blot, Gus exclaiming that it’s going to hurt, however, the Blot summons 2 Bloticles which began sucking the Paint out of the rocket, which was made out of Paint due to budget issues, causing it to crash into Dark Beauty Castle, however, Oswald makes up a plan to use fireworks to destroy the Blot once and for all, requiring Mickey to set them up.

Once Mickey meets back up with Oswald and Gus, the Blot grabs Oswald and absorbs him before capturing and absorbing Gus as well, Mickey then prepares for the final battle as he jumps into the Blot.

Mickey saves Gus from the Blot's grasp who then helps Mickey reclaim his heart, which is being protected by 3 Bloticles, Gus reveals that the Blot is using Mickey's heart to eventually become powerful enough to escape Wasteland and bring his terror to the Cartoon World, Oswald is also trapped however Gus tells Mickey that destroying the Bloticles will allow Oswald to break free.

Gus becomes sad however when he finds that some of the Bloticles are protected by Lost Characters, forgotten toons essences that were absorbed and devoured by the Blot, once the Bloticles is destroyed the Lost Characters melt away, Gus hoping that they returned to normal.

Once all the Bloticles are destroyed the 3 Bloticles relieve Mickey's heart, greatly weakening the Blot, Oswald grabs it before hesitantly giving it back to Mickey, he then uses the remote control to launch the fireworks, finally destroying the Blot and ending its reign of terror on Wasteland and ending its threat to the Cartoon World forever.

The Blot's defeat causes Paint to rain everywhere, not only returning Dark Beauty Castle back to normal, but also reviving Ortensia, Oswald overjoyed, it’s defeat also sends Mickey back to the Cartoon World where Yen Sid finds him.

Due to its destruction in Epic Mickey, the Blot does not appear in Epic Mickey 2: The Power of Two, however it’s creations, the Blotlings, still appear as common enemies, there is also a location named after it: Blot Alley, where most of the Blotlings live, also the Mad Doctor's latest creations: the Blotworx, are also a fusion of the Blot's name and Beetleworx, a hole in the wall of the cinema that is also in the shape of the Blot's face.

The Blot briefly appears in the prologue during one of Yen Sid's flashbacks of Mickey's heroic deeds.

The Mad Doctor then reveals that the reason he turned himself into an Animatronic in the first game was because it was an attempt to control the Blot since Cartoons need Paint to live, becoming inert without it, which the Blot absorbs daily, while Animatronics don’t need Paint and thus could get close to the Blot without risk of becoming inert.

Even after his defeat the Blot is mentioned daily in Wasteland, an entire ally was created in his likeness by Prescott and his Blotlings still wander around without a leader, attacking whatever they see. 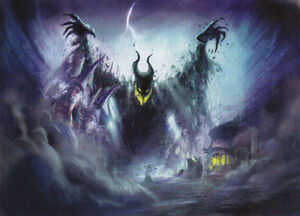 The Shadow Blot in action. 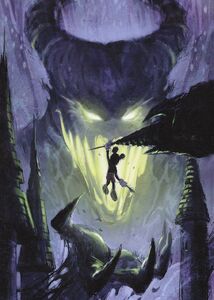 Artwork for the Shadow Blot. 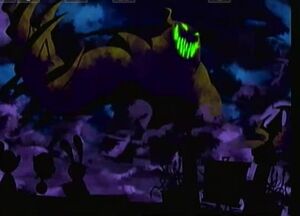 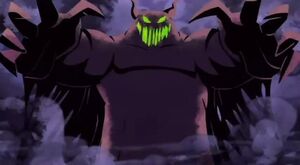 The Shadow Blot creating Bloticles to suck the Paint out of the rocket. 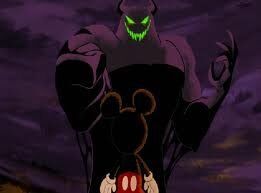 The Shadow Blot bargaining for Oswald's and Gus' lives. 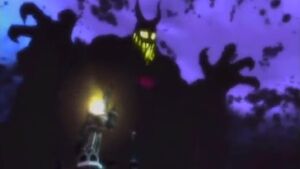 The Shadow Blot in 3D cutscenes. 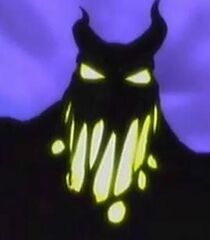 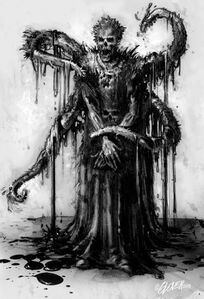 Concept art for the Shadow Blot (notice the similarity between it and the Horned King). 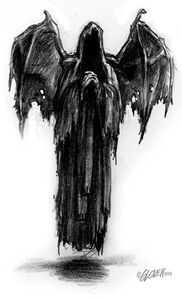 Concept art for the Shadow Blot (notice the similarity between it and the Grim Reaper). 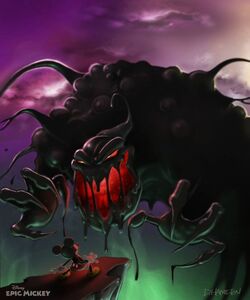 Concept art for the Shadow Blot. 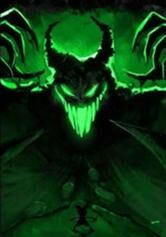 More artwork for the Shadow Blot. 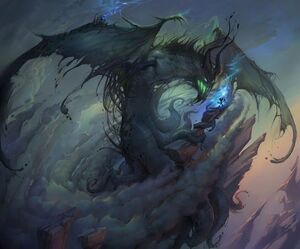 The Shadow Blot shortly after being freed. 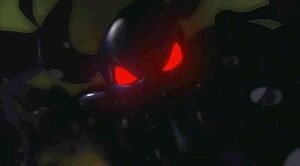 A beta appearance of the Shadow Blot. 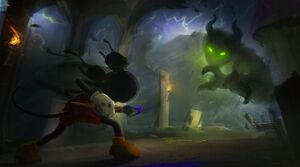 Concept art of Mickey facing-off against the Shadow Blot. 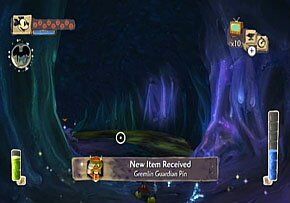 Inside the Shadow Blot. 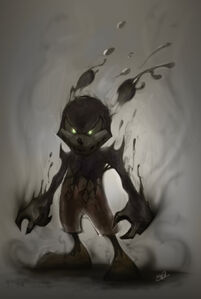 Concept art for the Mickey Mouse and Shadow Blot fusion.