Enigmatic Dark Form
RWQFSFASXC, better known as Shadow Bonnie, is a recurring antagonist in the Five Nights at Freddy's franchise.

Shadow Bonnie is a dark form that haunts both the old and new Freddy Fazbear's Pizza. Shadow Bonnie takes the form of a silhouetted Toy Bonnie. Shadow Bonnie returns in Five Nights at Freddy's 3 alongside Shadow Freddy, but unlike the latter, Shadow Bonnie is confirmed as a protagonist rather than a possible antagonist by helping what is presumed to be what remains of the Puppet.

He also appears as an antagonist in the Fazbear Frights book series.

Shadow Bonnie makes its first appearance in Five Nights at Freddy's 2. Rarely, the player may encounter what appears to be a shadowy, silhouetted version of Toy Bonnie, with white eyes and teeth, standing on the left side of The Office.

If the player stares at it for too long, it will appear to fade away like Golden Freddy and cause the game to crash. The mobile version, however, freezes the game instead. This hallucination is very much like Shadow Freddy, although it is seen in The Office instead of the Parts/Service room.

Shadow Bonnie returns as an important character in Five Nights at Freddy's 3, being an anti-villain as opposed to its appearance in the first game. RWQFSFASXC is the second to last key to the puzzle in the quest to free the children that commence at the end of the game.

As RWQFSFASXC, the player must complete either of the two Scenarios.

RWQFSFASXC's job is then complete and is not heard of again.

Shadow Bonnie appears in the AR game Five Nights at Freddy's AR: Special Delivery. He appears when the player collects too much Dark Remnant. The player has to shine the light on him, otherwise, he will jumpscare the player.

Shadow Bonnie appears in the story Hide and Seek from the book Five Night's at Freddy's: Fazbear Frights#6: Blackbird as the main antagonist. He's a character in the titular Hide and Seek, the new arcade game at Freddy Fazbear's Pizza and Games, where the player is tasked to find him. The teenager Toby, who works at the pizzeria is trying to win the game to show his worth to his older brother Connor, who already got the higher score on every other game at the location, and his distant father, who doesn't care much about him and spends most of his time either working or watching sports ever since his wife left him. Toby, unable to win, tries to cheat, but Shadow Bonnie mysteriously vanishes, so he, in fury, destroys the game and leave the room. immediately after that, all the lights go out, and Toby feels something harming his back. He wakes up in his bed, thinking it was only a dream until he finds out his shadow has been replaced by one of the rabbit's. He tries to get rid of it, but every attempt at it ends up in a failure. He starts feeling sick, and apparently none, aside from one of the customers at Freddy's, is able to see any difference in his shadow. At school, Toby tries to kill the Shadow by drowning it, going underwater in the pool, and almost drowning, only to be saved by Tabitha, one of his schoolmates. Toby tells her about the Shadow, who keeps becoming heavier and darker. Tabitha offers to help her and she gives him his number. The Shadow starts becoming stronger, arriving at the point of forming eyes and a mouth, while Toby keeps getting sicker every day. Toby dreams of being chased by the Shadow in a realistic recreation of the environment in Hide and Seek. In the end, he talks with his brother and realizes that the reason for his constant failures isn't because of someone else, but because of his own competitive attitude, and he starts feeling less angry. Thinking he will never get rid of the Shadow, he accepts his fate, but then he notices it's starting to weaken. Toby understands the Shadow was feeding off his anger, and that now he lost much of its power. He decides to come back to Freddy's to finally confront and defeating it. He plays again Hide and Seek, and then rubs his back against a wall, before puking blood from his mouth and gently closing his eyes, apparently dying but also defeating the Shadow. 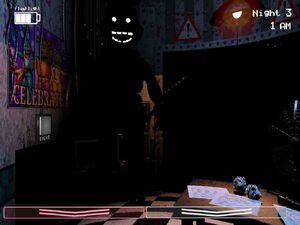 Shadow Bonnie in the office.

Shadow Bonnie in the Five Nights at Freddy's 3 minigame.

Shadow Bonnie in the hidden minigame on Five Nights at Freddy's 3. 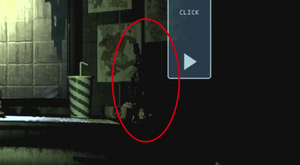 A Shadow Bonnie statue in Five Nights at Freddy's 3. 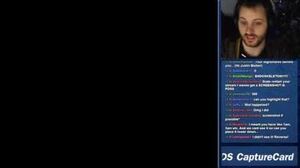 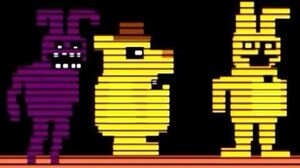