Restore the U.S. as the dominant military force of the world (succeeded posthumously).

They are an elite unit of private military contractors that was led by the versatile and compatible General Shepherd, the ex-commander of Task Force 141.

During the time as Operation Kingfish was conducted by Task Force 141 in 2013, Shepherd created the Shadow Company, an elite military contingent that was fiercely loyal to the Lieutenant General, in which he used for his personal gain and even considered them to be expendable as he never held any regard of their lives. They were willing to sacrifice themselves even involved to danger close, allowing Shepherd to carry out his goals.

Shepherd became the supreme commander of Shadow Company in his manhunt for Vladimir Makarov and he had given a blank check to use any resources needed. They made their first appearance in the mission "Loose Ends" during the campaign's third action.

When Shepherd's multinational special forces unit, Task Force 141, was collecting vital intelligence at Makarov's safe house near the Georgian-Russian border, the Shadow Company briefly appeared as friendlies to extract Simon "Ghost" Riley and Gary "Roach" Sanderson. However, Shepherd betrayed them by mercilessly executing them and secured the DSM before his soldiers dumped the bodies in a ditch and Shepherd set them on fire using a cigar.

In "The Enemy of My Enemy", he tried to eliminate both Price and Soap, who were looking for Makarov at the vehicle boneyard in Eastern Afghanistan, as well to eliminate Makarov himself. but the duo managed to escape by driving their vehicle into their Russian informant Nikolai's C-130 Hercules but Shepherd's men killed Rook (Soap and Price's last troop) and Makarov went hiding after giving Soap and Price Shepherd's location; Site Hotel Bravo.

In "Just Like Old Times", while residing in their command base, it was infiltrated by Price and Soap, who were on a suicide mission to kill Shepherd for his betrayal and the murders of Ghost, Roach, Rook and the other members of Task Force 141, along with the people whom he deliberately allowed to be massacred by Makarov and his men at Zakhaev International Airport in Moscow. When Shepherd realized that the base was compromised, he ordered the troops to help him escape while ordering a full evacuation and destroying the base in the process, but he still failed to kill Price and Soap.

In the final mission "Endgame", Price and Soap used a Zodiac to pursue Shepherd around the river all the way to the waterfall where Price destroyed Shepherd's helicopter and they dangled into the river below. After regaining conscious, Soap headed to the helicopter's crash site and after killing the two remaining soldiers, tried to kill Shepherd, but he fought back and recalled his motives after pinning Soap down and stabbing him with the knife Soap was using. As Price tackled Shepherd away, they fought in hand-to-hand combat until Shepherd gained the upper hand. After Soap woke up, he pulled the knife out of his wound with his last strength and managed to kill Shepherd by expertly throwing a knife through his left eye just as he looked up.

It is unknown what happens to Shadow Company afterwards due to being absent from Modern Warfare 3, but a container with their logo can be seen. It is likely that they were dissolved following Shepherds death.

In the 2019 Modern Warfare reboot season 5, Shadow Company are part of allegiance. However, they were not led by General Shepherd. They are led by Marcus "Lerch" Ortega. 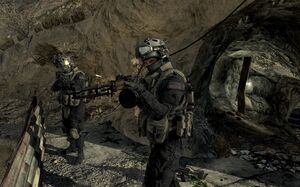 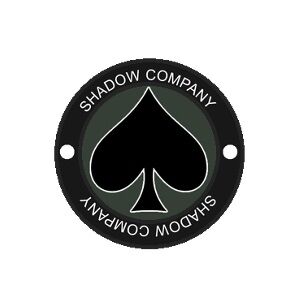 The official logo of Shadow Company.