Control over the Citadel of Ricks.

Countless assets at their disposal.
Influence.

Rule the Citadel of Ricks from the shadows and ensure they remain in power (failed).

The Shadow Council of Ricks, also known as the Brotherhood Counsel were minor antagonists in the adult animated cartoon series Rick and Morty. They were a secret cabal ruling the Citadel of Ricks with the public Council of Ricks being figureheads. The Shadow Council predated the actual Council and consisted of the most powerful Ricks out of the entire Citadel. All but two members were executed on the orders of the Citadel's President Evil Morty shortly after elections.

Like their C-137 counterpart and his other alternate selves they were voiced by co-creator Justin Roiland.

They appeared during the very end of the episode in a room with Evil Morty who had become President after surviving an assassination attempt by his recently-discharged Campaign Manager Morty. One of the members, Garment District Rick said to Evil Morty while he was having his hair done that it didn't matter who sat in the chair as the Council would always have control over the Citadel and its new President would instead answer to them rather than make his own choices. Evil Morty, who had turned his back to them responded by holding up his mirror and having the Ricks raise their hands if they agreed before snapping his fingers for the guards in the room to assassinate those who did. Evil Morty then asked the surviving Ricks, who did not share the same feelings and were terrified if they would obey to which they obliged. Their corpses were then seen floating in the space outside the Citadel along with other Ricks and Mortys that were killed onscreen and offscreen. 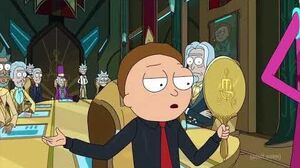 Evil morty becomes the president of the citadel HD scene 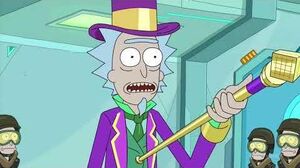 Retrieved from "https://villains.fandom.com/wiki/Shadow_Council_of_Ricks?oldid=3841570"
Community content is available under CC-BY-SA unless otherwise noted.