Shadow Dedede is a Mirror World counterpart of King Dedede and a major antagonist in Kirby: Triple Deluxe. He first appeared as the penultimate boss of that game's Extra Mode, Dedede Tour!, where he fought and was defeated by his Dream Land counterpart at Royal Road.

Immediately after Dedede defeats Queen Sectonia DX, the Dimension Mirror appears and Shadow Dedede emerges. He attacks Dedede without warning, though he is defeated and shatters into pieces of glass.

Shadow Dedede greatly resembles King Dedede, the only differences being his colors. Just like Dedede, he resembles a large, chubby penguin wearing in elegant robes, though his skin and robes are much darker colors. His skin is pitch black, and so are the edges of his robe and the ball on top of his crown.

His crown and robe are a much darker shade of red, as are half of the triangles on the piece of clothing around his stomach. The other triangles are dark gray, and the edges of the piece are gray and black.

The brim of his crown is dark silver, and his gloves and feet are also dark gray. His mouth is light gray, and his eyes are completely white, without any pupils, and are always angled downwards angrily.

His hammer is identical to Masked Dedede's, albeit different colors as well. The base is a very dark bluish-black, and the holes on it are silver. The edges have red and gray triangles on them and the round sides are white. The spike on top is gray and the handles is also dark gray in color. Shadow Dedede's symbol is three black circles, each of different sizes, the smaller ones inside the larger ones, and he wears this symbol on the back of his robes and on the sides of his hammer.

Like King Dedede, Shadow Dedede can attack by charging his opponent and tripping, or attempting to inhale them. The former attack leaves one star. Also like Dedede, Shadow Dedede will jump around three points of the arena, and two stars will appear on either side of him when he lands. He can also briefly prep his hammer before leaping into the air and slamming his hammer down as he lands, creating a shock wave that travels to the end of the arena in whichever direction he is facing. Once the shock wave hits the edge of the arena, it will disappear and a star will appear in its place. Shadow Dedede can also put down his hammer, and one side of it will open, releasing missiles, as opposed to King Dedede's fire. Lastly, he can approach his enemy and attempt to flatten them with his hammer. Each time he hits the ground with his hammer, a star will appear.

Once half of Shadow Dedede's health is gone, he will fall over and his hammer will shatter into pieces of glass, but, like King Dedede, he will float to his feet, surrounded with a dark aura, and attack again. Instead of grabbing an axe from a nearby pillar (since there are no pillars in this arena), he will summon a hammer himself.

Shadow Dedede will perform multiple combos with his axe, stepping forward which each attack. He can turn around very quickly and begin another series of even quicker attacks, and lunge forward to finish his combo, leaving three stars behind him. Shadow Dedede will briefly charge his axe before jumping into the air and slamming his axe down when he lands. He will do this several times in a row; his axe will create a small purple explosion around him, and five stars will appear.

Near the end of the fight, Shadow Dedede will float into the background and a jagged mouth will appear on his stomach. Still in the background, he will charge several dark spheres, and shoot them at his opponent. He will then float into the foreground again and charge and shoot several larger dark spheres. Each sphere will bounce off of the top and bottom of the arena, and leave a star when they do so. 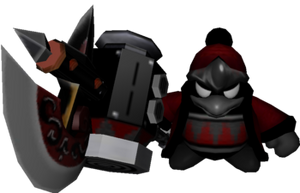 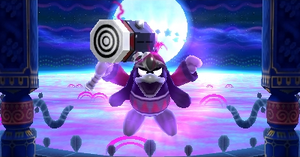 Retrieved from "https://villains.fandom.com/wiki/Shadow_Dedede?oldid=4019346"
Community content is available under CC-BY-SA unless otherwise noted.