Help free the souls of the animatronics (both possibly, both succeeded).

He is an enigmatic character who lured the animatronics to William Afton either to help the former or the latter.

In his original and most known appearance, Shadow Freddy has exactly the same appearance as Withered Golden Freddy, although the color is changed from golden/yellow to dark purple. Due to this, he's in disrepair. He completely lacks a left ear and has many tears over his body. Unlike Golden Freddy, his eyes and teeth glow white. In Five Nights at Freddy's 3, Shadow Freddy lacks the glowing white effects for the eyes and teeth and is covered with green levels that appear to be lighting from the Office itself.

In the VR game Five Nights at Freddy's VR: Help Wanted, he shares the exact appearance as the original Freddy Fazbear. Although he has glowing white eyes and teeth, his overall color is completely black rather than purple.

In the minigames of Five Nights at Freddy's 3, he looks like Freddy, except purple.

Shadow Freddy appears only as a rare easter egg encountered in the Parts/Service room after everyone leaves it (including Foxy the Pirate). He sits in Withered Bonnie's place.

He appears in a slumped position similar to Golden Freddy in the first game and also uses his model. Looking at him too long will cause the game to crash. Brightening up this image reveals that Shadow Freddy is purple in color like several other key items/characters in the franchise, bearing comparisons to William Afton's minigame sprite, the Puppet's "tears", and Fredbear's hat and bow tie among other things.

Shadow Freddy plays its most significant role in Five Nights at Freddy's 3. In the end-of-night minigames, Shadow Freddy lures Freddy, Bonnie, Chica , and Foxy in that order to the secret backroom next to the toilets. Because their programming prevents them from entering it they are forced to turn around and walk away, at which point Afton ambushes them from behind and dismantles them. Shadow Freddy does not appear to the now-released ghost of one of Afton's victims, however.

Rarely, the player may see Shadow Freddy slumped in the leftmost end of the Office. He once again assumes the same position that Golden Freddy does in the previous games. However, unlike the second game, he doesn't cause the game to crash. He also does not attack or jumpscare the player.

In the minigame, Shadow Freddy shows up as an obstacle in the third level, attempting to stop Freddy from giving the children pizza. Freddy needs to throw pizza at him to stun him for a brief moment, allowing Freddy to get pizza to the children behind him. In the fourth level, he begins duplicating rapidly and the entire minigame starts glitching. The minigame cuts to black and we are introduced to Scrap Baby and the Cassette Man.

Interestingly, he is called Dark Freddy in the game files.

Shadow Freddy serves as Freddy Fazbear's replacement during the Parts and Service mode in hard mode but has no changes in behavior.

Shadow Freddy is an unlockable character. He uses three attacks in the game:

As Shadow Freddy's attacks all only have a small chance of actually killing someone, it's necessary to have stronger party members alongside him. Successfully insta-killing an enemy can quickly put the fight in the player's favor, though bosses are immune to this ability.

Shadow Freddy makes a small cameo in the book. He took Clay Burke, John, and Jessica into the underground location where Twisted Freddy and Charlotte Emily are.

Shadow Freddy on the Five Nights at Freddy's 2 Camera

Shadow Freddy as a sprite in Five Nights at Freddy's 3. 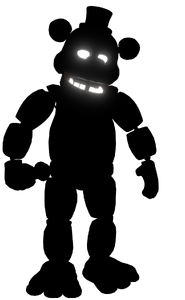 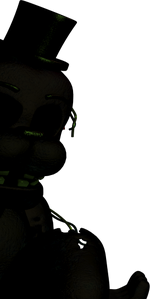 Shadow Freddy appearing in the Five Nights at Freddy's 3 Office. 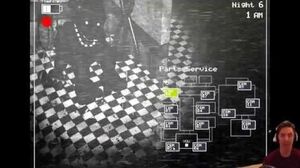 How to summon Shadow Freddy and Secret Foxy