The Shadow Knight is Bart Simpson's character in the RPG game "Earthland Realms".

When Marge discovered he was really Bart she was shocked that he was so violent but happy that her son played the game well.

He lived in a castle with Milhouse, his helper who he turned into a lady. He was a regular customer at a tavern run by Moe.

When Cleric came to visit him, she didn't like his decorating style, much to his annoyance. In Moe's tavern in the game, the Shadow Knight asked Moe to serve him a drink made from blood wrung from the head of a pixie. He then told Moe to flog himself with a mace while reciting the goblin's code. Cleric then came into the bar and told him off for drinking, further annoying him. However, after Cleric accidentally went into the bullies' camp, the Shadow Knight saved her.

He accidentally killed Cleric but brought her back to by donating two thirds of his Heath points, making him very weak. The other characters took advantage of this and killed him, despite his threats that if they killed him in the game he would egg their houses in reality. After his characters death, Bart gave up the game but Marge made a new character to avenge him. 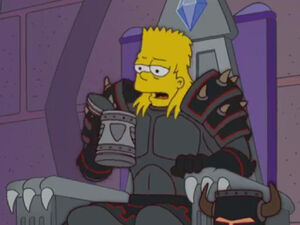 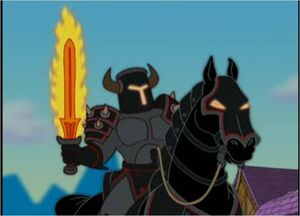 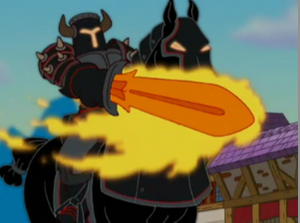 Retrieved from "https://villains.fandom.com/wiki/Shadow_Knight_(The_Simpsons)?oldid=3891803"
Community content is available under CC-BY-SA unless otherwise noted.