Biomechanical and cyborgized version of Chun-Li and brainwashed servant of M. Bison

Shadow Lady (in Japanese: シャドウレディ Shadou Redi) is a secret character in Marvel vs. Capcom: Clash of Super Heroes. She is a roboticized and cybernetically-enhanced version of Chun-Li with a highly darkened color palette, increased speed and a few cyborg based moves which are empowered with Shadaloo technology. It's speculated that she is an evil robot/cyborg clone created by M. Bison to match Chun-Li or that Chun-Li was forced to become a cyborg. Due to the fact that she didn't appear in any other Marvel vs. Capcom game, she probably was destroyed by Chun-Li or someone else.

A character similar to the Shadow Lady was Shadow, who is Charlie Nash after being abducted by M. Bison. In her ending, an evil version of Jin Saotome also appears, later called Shadow Jin. In this same ending, it's shown that both Shadow and Shadow Lady have defected from Shadowloo, as they were trying to save Jin from M. Bison, but arrived late.

Shadow Lady wears the same clothes as her original counterpart, but her clothes are now dark blue with golden details. Her alternate color is pink with green details.

Shadow Lady represents a Chun-Li that has been captured and experimented on by Shadaloo in the same manner Shadow was in the previous game. M. Bison, who had been looking for a potential test subject for creating a super soldier for Shadaloo, found this in his arch-enemy Chun-Li.

Chun-Li is captured and turned into a cyborg/robot brainwashed and programmed to obey M. Bison. After being cyberized, she struggles with having both a robotic side that's programmed to mindlessly obey Shadaloo's orders, and her re-emergent human side. Many of Chun-Li's original attacks are replaced with a veritable arsenal of high-tech weaponry, including drills, plasma laser beams, an electric shield and homing missiles, all contained within her robotic shell.

However, she was not enhanced with Psycho Power like Shadow, only gaining mechanical parts that enhance her mobility and power. Shortly after her remodeling, her human side wins; she regained her memory, broke free of the Shadaloo programming and ran away from Shadaloo, eventually joining Shadow to fight against evil.

In Chun-Li's ending, M. Bison captures her and "welcomes" her to Shadaloo, but Shadow appears and saves her before anything happens. Whether this means her existence in-game is simply a "what-if" character or not is uncertain.

When confronted as a CPU opponent, Shadow Lady appears together with Bison, who floats behind her and orders her to go forth and show the world Shadaloo's true power. In her ending, however, she appears working together with Shadow, indicating she has also broken free from Bison's control.

Shadow Lady also has her own attacks, which differ from Chun-Li's moves. She has the Rainbow Missile, three missiles fired from her back, the Miracle Drill, an attack that turns her hands into a drill to attack the opponent and the Plasma Barrier, a shield made of electricity. Other unique moves she has include the Triple Jump and Air Dash, which she is capable of due to having compact Vernier thrusters on her soles. Her Hyper Combos include the Big Bang Laser, a giant energy laser fired from her palms, the Galaxy Missile, a series of missiles that Shadow Lady shoots towards the opponent from her back and the Final Mission, a move she shares with Shadow.

In her ending, she and Shadow arrive too late to stop Bison from fatally injuring Jin. Shadow Lady sees Jin's still barely alive, and Shadow states that only cyborgization can save him now. The screen then goes white, and when it fades back Jin is seen alone, standing in place with a darker, Shadow-like palette and with his right hand turned into a drill. Jin then questions if he's alive or not.

The gameplay of Shadow Lady is in parts very similar to that of Chun-Li, players can use the Infinity Leg (a version of the Hyakuretsukyaku), Sky Counter Crash (Hazanshu) and some unique attacks such as Yosokyaku, Wall Jump, Kakukyakuraku and Reishiki Kikouken.

The gameplay of Shadow Lady is in parts very similar to that of Chun-Li, players can use the Infinity Leg (a version of the Hyakuretsukyaku), Sky Counter Crash (Hazanshu) and some unique attacks such as Yosokyaku, Wall Jump, Kakukyakurakuand Reishiki Kikouken.

Shadow Lady is a darker palette swap of Chun-Li with glowing gold accents, but unlike Shadow, who retains almost the same moveset as his original self, Shadow Lady plays almost entirely different from Chun-Li. They share some of the same moves and unique attacks, but Shadow Lady possesses a number of her own moves that display her cyborg/robotic nature, such as large drills instead of hands and missile launched off from her back. While Shadow's moves ignite the enemy in blue flames to indicate he was infused with Psycho Power, Shadow Lady lacks this feature. 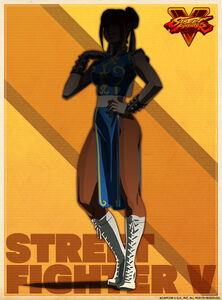