Shadow Lugia, code named "XD001", is the mascot and main, non-human antagonist of the 2005 GameCube game Pokémon XD: Gale of Darkness. It is a Lugia corrupted by the criminal organization Cipher, and considered the ultimate Shadow Pokémon.

Shadow Lugia is a dark purple version of its good counterpart. The spikes around its eyes are silver and jagged, while its eyes are red with a pale circle for its iris. Its wing fingers are often incorrectly shown as having points or claws, and its feet have three pointed toes. The fins/spikes on its back are tipped in a pentagonal shape with no base, like a tombstone. The marking on its stomach is a lighter color than its body.

Unlike other Pokémon games, this one contains a different kind of Pokémon other than shinies. They are called Shadow Pokémon. The most well-known Shadow Pokémon is the main mascot of the game, Shadow Lugia. At a certain point in the game, the player will receive an Aura Reader, allowing the player to identify Shadow Pokémon, and the player will need to purify the Pokémon. According to Cipher, it is impossible to purify Shadow Lugia due to its power. However, should all nine Sets of the Perify Chamber have perfect Tempos, Lugia can be immediately purified. 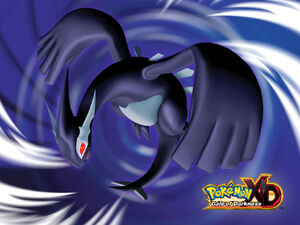