Kill Nicky and his younger self (failed).

The Shadow Man is the secondary antagonist and final boss of Hello Neighbor and the main antagonist of Secret Neighbor and Hello Engineer. He is a strange, unknown shadow that seems to stalk protagonist Nicky Roth as he tries to find out what is in his neighbors basement and to overcome his three fears from his childhood. He is the arch enemy of the Rescue Squad.

The Shadow Man can be spotted somewhere in each of the nightmares Nicky has to go through to overcome his childhood fears, known as Fear Levels, the Shadow Man appears on a rafter in Fear Supermarket, it appears standing on a hanging pipe in Fear School, and is seen watching from under a table in Fear Darkness.

The Shadow Boss falls and explodes into light, appearing in a white void with only an Exit Door and a crooked house. If Nicky peers into the house, he will see a panicking Mr. Peterson who has barricaded himself into a room to escape the Shadow Man, who is one the other side of the door, enraged that it cannot get to Mr. Peterson. Unable to save Mr. Peterson from the Shadow Man, Nicky leaves through the Exit Door.

This ending shows that Nicky did not defeat the Shadow Man, but merely freed himself from its influence.

The Shadow Man can be briefly seen whenever the children successfully kill Mr. Peterson. Revealing that the Shadow Man is the true culprit of kidnapping Nicky.

As Mr. Peterson, the Shadow Man can disguise as any nearby child, enter a rage mode when damaged enough that makes him faster and invulnerable and he can also place down bear traps.

The Shadow Man can also take the form of Mr. Peterson in a clown costume, in this form he can disguise himself as a random object, distort the vision of kids that escape from his grasp and even throw smoke bombs that damage any kids near to where it is thrown and releases a cloud of thick smoke.

The Shadow Man can also take the form of a slightly obese Mr. Peterson in the attire of a butcher, in this form he can create fake crows to prevent the real crows from helping the kids, see smoke trails left by kids and can throw meat hooks tied to ropes to grab kids and objects from a distance

The Shadow Man itself, after its Mr. Peterson disguise is destroyed, will teleport into a different room and regenerate its disguise before stalking the children again. It can also shape shift into household objects such as chairs, tables, and during the halloween event, a jack-o-lantern

The Shadow Man is a man that is entirely black with white glowing eyes and spasming black particles for hair, its body sporadically becomes smaller and thinner or bulkier and bigger with strange black particles appearing and disappearing close to or on its body.

In his first disguised form he appears as Mr. Peterson but with gray skin with black burn-like spots on his face.

In his second disguise he once again resembles Mr. Peterson only in a bright clown outfit with white makeup, puffy red hair, and a red clown nose (closely resembling the appearance of Tim Curry's version of Pennywise).

In his third disguise he once again resembles Mr. Peterson but more closely resembles his first disguised form only with more slicked down hair and sideburns, he also appears more obese and his sweater is now red and black, he also sports black boots instead of tennis shoes and an apron with various tools such as a meat cleaver. 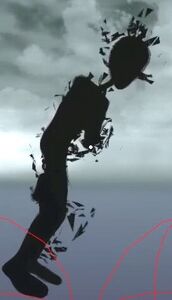 The Shadow Man in the scrapped Fear Gym. 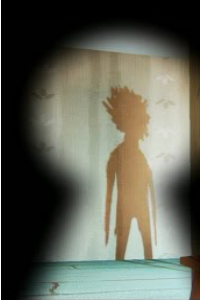 The Shadow Man in the third version of the Alpha. 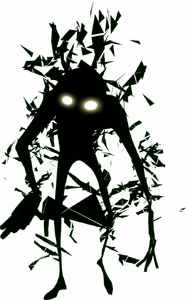 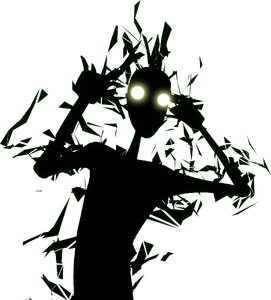 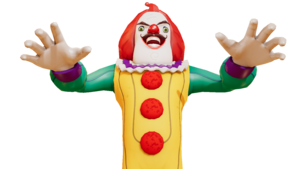 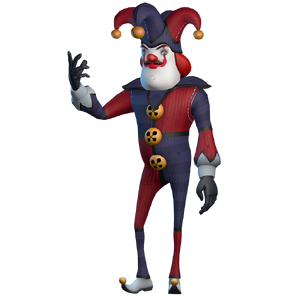 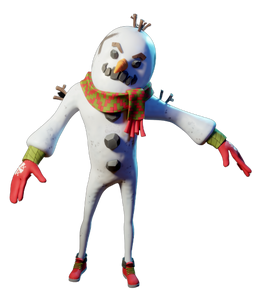 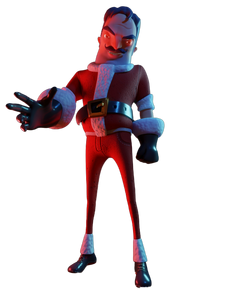 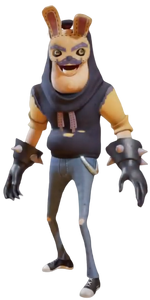 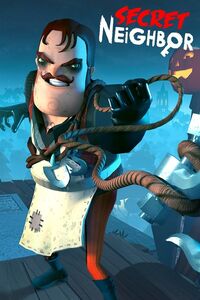 Retrieved from "https://villains.fandom.com/wiki/Shadow_Man_(Hello_Neighbor)?oldid=4076038"
Community content is available under CC-BY-SA unless otherwise noted.