The Shadow Master (in Japanese: シャドー・マスター) is a deadly evil shinobi warrior and he serves as both the main antagonist of the video game Shinobi III for Sega Megadrive, and the game's final boss. He also serves as the main villain of Shinobi 3D. With tremendous ninja skills combined with a body enhanced by Zeed's secret science department, it is rumored that he is cloned from the Oboro Clan warrior Joe Musashi's own bloodline. Annoyed with Musashi's constant interference, he seeks to destroy him, knowing that he is the only ninja alive capable of thwarting his plan of world domination.

After the warrior Joe Musashi prevailed over the Neo Zeed crime syndicate two years ago and became the new chief of the restored Oboro Ninja Clan, it was then discovered that the Ninja Master was just a figurehead for Neo Zeed. Its true mastermind was the mysterious dark ninja known only as the Shadow Master, a cybernetic, bio engineered shinobi warrior cloned from the Musashi bloodline.

After summoning his cohorts into a meeting he issued an order. "For us to attain our dream of world domination, kill our hated enemy Joe Musashi!".

After his attempts are foiled, he faces Joe Musashi in the Zeed Aeroship dubbed the "Wing of Darkness". After changing the room's virtual reality chamber to his liking, the evil shinobi proceeded to attack. Initially on equal ground with Musashi during the battle, he gained a power-up from the energy of the room and became deadlier as the battle raged. Eventually, he would meet his ultimate fate at Musashi's hands, with his core overloaded and the Shadow Master self-destructs, causing the Wing of Darkness to malfunction as the fortress crashes and burns away

During the Keicho war, the Shadow Master served as one of the lords of the Zeed ninja group. The Zeed forces defied the will of the Emperor, and Jiro Musashi was tasked with their destruction. Realizing that all was lost if Jiro saw his face, the ZEED Ninja bought him time to escape before Jiro could spot him.

Upon learning that Jiro still lives, the Shadow Master sends his forces to eliminate him. After nearly killing Sarah only to be stopped by Jiro, A stray bullet from Sarah causes his mask to break, revealing to Jiro that he is both the Zeed Lord he was sent to kill in the past and worst of all, his own teacher. He is then defeated by Jiro in combat, but Jiro spares him out of respect for the man he called master, but the Shadow Master snickers and strikes the ship's controls and dies in the crash.

IN Shinobi III, the Shadow Master appears as a ninja dressed in a dark red shozoku wearing cybernetic armor. In closer examination, it appears similar to the armor of the Shredder from the famous Teenage Mutant Ninja Turtles franchise. After receiving enough damage, his suit turns bright red, indicating that he's fighting at full power, enabling him to use cybernetic weapons.

In Shinobi 3D, the Shadow Master wears a black kimono with golden embroidery and a crimson horned Oni mask with the Zeed emblem that extended his life well beyond its natural end.

The Shadow Master is a cunning, secretive, and treacherous individual whose identity he entrusts only to his closest Neo Zeed members, Karura and White Lion. He desires to rule the world with fear and intimidation and to usher in a new age where the Ninja rule the world from the shadows.

Those who serve him well are rewarded with praise, wealth, power and status, but those who fail him, he punishes ruthlessly with hideous forms of torture such as making them guinea pigs for Neo Zeed's cruel and inhuman biotechnology experiments or kills them slowly and painfully.

His grievances with the Oboro Clan are many, especially Joe Musashi, who has ruined his plans time and again. To finally achieve his ambition of world conquest, he will stop at nothing to destroy Joe Musashi and crush the entire legacy of the Oboro clan. He never tolerates failure, and he is as ruthless as he is cunning.

In Shinobi 3D, occasionally, he will appear just to taunt Jiro Musashi, when his loyalty is to a power even higher than his own. Like his original namesake, he is ruthless and cruel. Intolerant of failure, including if it's his own, he scoffed at Jiro's lingering feelings for him as his student and attempted to kill the Oboro Ninja along with himself. 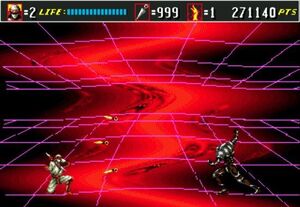 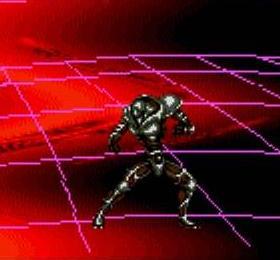 Retrieved from "https://villains.fandom.com/wiki/Shadow_Master_(Shinobi)?oldid=3530147"
Community content is available under CC-BY-SA unless otherwise noted.