Over 10,000 years ago since the death of Outworld's original ruler known as the Dragon King.

The Shadow Priests are Shao Kahn's elite royal spellcasters founded based upon his knowledge of dark magic way over 10,000 years ago after he usurped the throne of Outworld from the feudal magic kingdom's first ruler (though the late true emperor's own holymen made a plan involving his original empire ritualistically mummified upon their Mass suicide and await his second coming from one of two obscure locales in Outworld). They established their own cult compound in a towering monastery etched with cryptic symbols and grotesque statuary within its very Chambers and walls where they practice and harness their dark powers as well as torture and sacrifice both victims and enemies alike.

They are led by his sorcerous slave Shang Tsung who served his empire without question, yet he secretly strived for so long to betray his emperor and seize absolute power over Outworld for himself. They too also even operated a clawed orb-like device within the dreaded Soul Tombs that restores Shang Tsung's youth.

The Shadow Priests also seem to have a mastery of the black arts to a point that they have designed a hybrid union of Edenian blood and Tarkatan flesh, and the result of such abominable practice was Mileena, whom Shao Kahn who ordered her creation, viewed Mileena only as his "true" daughter and his knighted successor to the throne of Outworld by his decree.

They were responsible in their master Shao Kahn's plot of brainwashing the reaminated Queen Sindel for the invasion plan against Earthrealm, but that scheme would backfired when Princess Kitana freed her mother from the spell and made remembered her true past and her suicidal intention of escaping being Shao Kahn's trophy wife, as Sindel joined her daughter's Earthrealm allies including the Shaolin warrior Liu Kang against Shao Kahn, and they not only successfully saved Earthrealm, but also ultimate dissolved the sorcery that bound Sindel's lost regal homeworld of Edenia to Outworld for centuries.

The Shadow Priests may have not survived nor been present during the end of the current timeline involving the Great Battle at the Pyramid of Argus within Edenia in Mortal Kombat: Armageddon.

The Shadow Priests did not appear in MKX nor MK11 since they have been disbanded and quite possibly entirely wiped out due to Emperor Shao Kahn's deathly punishment by the Elder God's during his failed brutal invasion of Earthrealm later followed by the Osh-Tekk people's leader Kotal Kahn's strained but rightful reign over Outworld as it's new emperor, and the execution of the mad "Empress Mileena.

The Shadow Priests, because of their knowledge and control of dark magic which includes levitation and shadow movement, guard the swirling vortexes linking to various locations in Outworld including The Portal area itself for centuries, and they are capable of striking against trespassers and foes with various spells while they also summon and aid nearby comrades with occultic enhancements they possess such as strength augmentation and vitality regeneration.

The Shadow Priests also made an appearance throughout the first Mortal Kombat film, yet in their dark-brown hooded robes, and overlooking both Shang Tsung's Island within Earthrealm and in the Black Tower within Outworld.

The Shadow Priests later reappeared in the second Mortal Kombat movie, only residing in their much darker and leather hooded robes within their master Shao Kahn's Fortress, and they are also slaves to the traitorous Elder God Lord Shinnok.

The Shadow Priests made an appearance as villains and even invincible magical bodies within their veiled darker robes and sometimes with occultic tatoos on the forehead of their human-like skin in the TV series Mortal Kombat: Conquest, and they are among the few to remain ever obedient to Emperor Shao Kahn who appoints them as his interrogaters and torturers. They are expert martial artists as well as strong mages equipped with bewitched weapons such as swords at their disposal along with their sorcery. They can also merge into one stronger, muscular Shadow Priest at a time as demonstrated within the doomed Earthrealm's city of Shakaana home to the defunct cult tribe Shaakans. While shown as superior to all mortals, they failed to withstand against Earthrealm's thunder god Raiden. Unlike in the games, they are far more powerful than Shang Tsung himself.

The Shadow Priests serves as minor villains in the animated series Mortal Kombat: Defenders of the Realm. 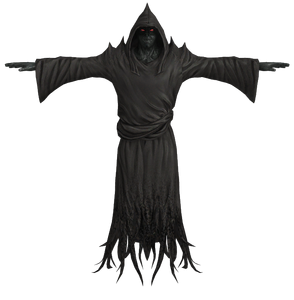 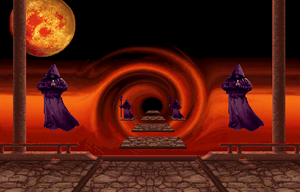 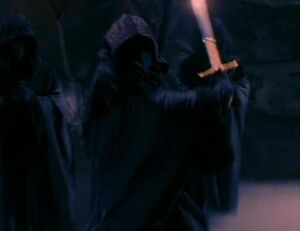 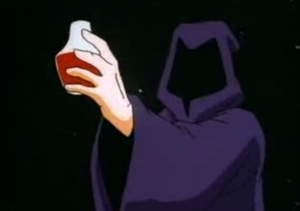 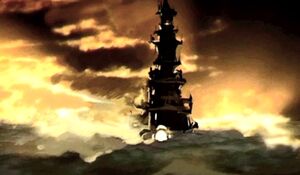 The Evil Monastery, home of the Shadow Priests. 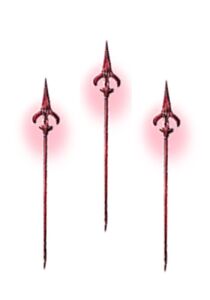 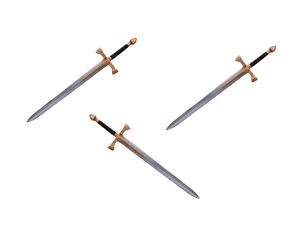