Leader of the Dark Hunters

Pairing his foes or different Dark Hunters together.

The Shadowed One is a major antagonist of the BIONICLE franchise. He was a charismatic leader who lead the group of mercenaries called the Dark Hunters and a co-founder of the faction alongside his friend, Ancient.

The Shadowed One was a large, bipedal being. He had two red eyes and silver horns. His body was colored black and yellow and fitted with silver armor pieces. After the events of the Bionicle novel Time Trap, the Shadowed One has aged more than three thousand years, only this did not affect him much aside from weakening his powers.

Much of the Shadowed One's past is shrouded in mystery (to the point where his "...true name has been lost to history, and it is doubtful anyone remembers it besides myself [himself]"). He and his fellow Dark Hunter co-founder, codenamed "Ancient", were born in "a land of shadows and ice, a place that was never blessed by the loving gaze of Mata Nui". His kind was, for lack of a better word, cheated out of any purpose- the Matoran got their "special status" and the Brotherhood of Makuta came to be Mata Nui's servants, and "those who dwelled in my [his] land were ignored and abandoned", left to crumble beneath the weight of "strict codes of behavior". Determined to carve an empire out for himself, he "began taking on the tasks Matoran were too timid to do and the Brotherhood saw as beneath it". With his friend Ancien, who had ignited a civil war in their homeland, they created the idea that would eventually be the Dark Hunters.

At one point, The Shadowed One appointed Ancient and Sentrakh as his personal bodyguards. He was responsible for the start of the Toa/Dark Hunter war.

The Shadowed One never met Pridak. However, as something struck Xia and killed the remaining Vortixx, The Shadowed One disappeared. He later migrated to Spherus Magna after Makuta Teridax was killed.

The Shadowed One is the ruthless and charismatic leader of the Dark Hunters who ruled the whole organization with fear and abuse. He is also arrogant and sadistic and have an ego as he refuses any other beings to slander his honor. He also enjoyed pairing his minions, both for strategy and his own amusement.

He is also a skilfull liar and pragmatist as he resorted on lies and dirty tricks to ensure various agents remain in the organization. He also has dealt with numerous threats to his rule. 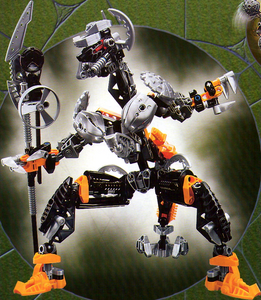 The Shadowed One in the promotional artwork. 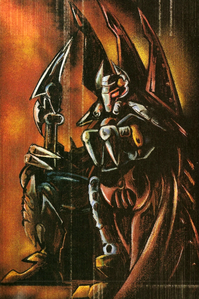 The Shadowed One sitting on his throne.