Moving around in their material forms

Eliminate all telepaths who could be threat to their technologies.

The Shadows are a malevolent alien race from the TV series Babylon 5. The name "Shadows" is not their true name. Their true name is actually ten thousand letters long and is hard for anyone outside of their race to pronounce. They were also known as "The Ancient Enemy" by a warrior alien race, the Narn. Up until the middle of the fourth season, they were the main antagonists of the entire series. Despite not being in the fifth and final season, their dark legacy, through the actions of their former dark servants and left over Shadow-Technology, was strongly felt for a long time.

When they were a young race they were found by Lorien and the First Born, who taught and guided them until they were ready to stand on their own. Like the Vorlons, the Shadows opted to stay in the galaxy to guide the younger races when most of the other First Ones went out beyond the Rim, into the void between galaxies. The Shadows believed that races could only grow stronger through chaos and conflict and that driving the younger races to war with one another. A diametrically opposite view to the Vorlon's ideology of order and obedience. Initially the two guardian races agreed to honor the each others positions, respect their boundaries and agreed on rules of engagement. However, as time went on, one or both of them decided that their way was the only correct way to help the younger races. A series of wars were fought against the Shadows with the Vorlons recruiting several younger races and even some of the last remaining First Ones. The Shadows were repeatedly defeated and driven back to their Homeworld of Z'ha'dum, where Lorien was known to have been dwelling. The Shadows believed they were showing him respect by returning every time. After a defeat they would go into hibernation, waiting for the right time to move again.

Around the Earth year 1259 the Shadows were again awake and on the move, setting up bases on remote worlds, forging alliances and seeding conflict among the younger races. One planet resisted their attempts to establish a base and so the Shadows decided to make an example of them by releasing a Bio-genetic Plague into their atmosphere then leaving them to die. One of the younger races, the Minbari were then new to space travel and were driven back by Shadow forces almost to defeat. When they lost their greatest Starbase, the center of their war effort, it appeared as though they were on the verge of collapse both from without and from within. To their surprise and as if in answer to their prayers a replacement station arrived along with the Vorlons, who had until that point been unknown to them and a Minbari not born of Minbari named Valen.

Around this time, one of the Shadows many bases of operation was located on one of the southern continents of the planet Narn, populated by a relatively peaceful, technologically primitive agrarian race and were mostly ignored by the Shadows. However, the presence of telepaths in the local population provoked the Shadows and their dark servants into culling that part of the population. Eventually the Narn prophet G'Quan, with the support of G'Lan and a number of other such beings lead the last remaining telepaths to drive the Shadows from Narn, never to return.

On Minbar, Valen eventually managed to unite the Minbari and alongside the Vorlons and some of the remaining First Ones organized the other races to drive back the Shadows. The Shadows retreated into hibernation once more, though not before burying many of their ships and supplies on hundreds of barren unpopulated worlds including Mars and Ganymede where they would be safe and easy to quietly retrieve when the time was again right for another war. The return of the Shadows was prophesied by many races including the Minbari, Narn, and Pak'ma'ra.

In 2253, one of the Shadow's hidden ships was discovered 300 feet beneath Syria Planum by an IPX sponsored dig led by Dr. Mary Kirkish. As soon as the ship was exposed to sunlight it let off a homing signal and before long another Vessel arrived to retrieve it, though not before the humans managed to install a homing beacon of their own, allowing them to track the location of Z'ha'dum.

In 2254, while the Shadows slept their allies recognized the newly completed Earth Alliance station Babylon 4 as the same station that appeared with Valen to turn the tide against them. Sending a group of fighters to attach a fusion bomb they hoped to destroy it and change the course of history in their favor. The attempt failed when an unknown vessel intercepted and destroyed them shortly before B4 disappeared into a temporal rift.

In 2256, the IPX ship Icarus arrived on Z'ha'dum, causing the premature awakening of the Shadows. The Icarus crew were captured and given the opportunity to serve them, all but one - a Dr. Morden - refused and were converted into fresh CPUs for their warships.

In 2259, there were increasing reports of a black, spidery ship being encountered in hyperspace, which instilled a dark fear in all who looked upon it. Meanwhile, Narn ambassador G'Kar realized that these ships were those described in the ancient writings of the Narn philosopher G'Quan, which told of a great enemy that rose to power a thousand years in the past. Known as the Shadows, they spread from their homeworld Z'ha'dum to rival the stars themselves:

The text is accompanied by pictures of the black ship, and ends on a chilling note:

In late 2260, Captain John Sheridan was invited to Z'ha'dum for a meeting with the Shadows. The Shadows badly wanted to have Sheridan on their side because if he unraveled the Army of Light, it would stay unravelled, but, as past experience had showed them, if they killed him, someone else would simply take his place.

Sheridan did go to Z'ha'dum but the negotiations collapsed, and he jumped into a ravine two miles deep to evade capture once his suspicion that he had been led into a trap was confirmed.

Before doing so, he remotely piloted his ship, the White Star, to crash into the Shadows' capital city, which he was visiting. The White Star was carrying two nuclear bombs in its cargo bay, each with a yield of over 500 megatons.

Seconds after Sheridan jumped into the abyss, the White Star crashed into the city and the nuclear weapons it contained detonated. Both the White Star and the city were destroyed. The crater left from the blast was the size of a large Earth country and was clearly visible from space.

The explosion on Z'ha'dum destroyed the Shadows' biggest city, throwing them into chaos and forcing them to regroup. They then went to seek outside help, and enlisted the Centauri to shelter a fleet of their ships on Centauri Prime.

At the Battle of Coriana VI, the second Shadow War ended, and the Shadows passed beyond the Galactic Rim. Nonetheless, their servants, the Drakh, and a few others stayed behind, and retained the advanced technology and aggressive philosophy of the Shadows.

Sheridan, along with Alfred Bester and Lyta Alexander, went back to Z'ha'dum in early 2261 in search of some of this technology. This triggered a self-destruct security feature that caused the entire planet to explode, leaving nothing behind — except for what the Drakh and other allies of the Shadow's took with them in their quick exit from the exploding planet.

The Drakh aren't the only race who worked for the Shadows, but neither the surgeons and pilot in "Ship of Tears" nor the creature in "The Long Dark" were seen to be helping with the evacuation, though of course it has been speculated that the Drakh might have been the only Shadow servants to have been living on Z'ha'dum at that time.

With the destruction of Z'ha'dum, those beings that had faithfully served the Shadows down through the centuries found themselves homeless. Now these thralls sought to become masters of chaos themselves. Thus, the legacy of the Shadows lived on. 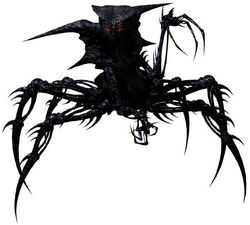 A member of the evil alien race called the "Shadow". 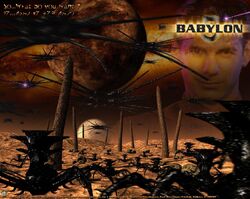 The invasion of the Shadows.
Community content is available under CC-BY-SA unless otherwise noted.
Advertisement