Kill the Hunter and prevent them from reaching Byrgenwerth (failed).

The Shadows of Yharnam are minor antagonists and bosses in Bloodborne. Infected with snake parasites, these black hooded assailants use their serpent abilities to kill hunters and other humans to quench their lust for bloodshed.

The Shadows are Keepers of the Old Lords and followers of Queen Yharnam. Sometime prior to the events in Bloodborne, the trio found their way out of the Chalice Dungeons and into the real world. Finding themselves in the Forbidden Woods, they have been infected by snake parasites, but unlike the other hosts for the snakes in the woods, they are able to control themselves from the snakes' possession. Instead, by using their snake-like powers, they can extend their limbs and summon massive serpents to devour their victims.

At the Forbidden Grave of Great Ones near the end of the Forbidden Woods, the Shadows ambush the Hunter. Using their powers, they try to stop the Hunter from entering Byrgenwerth, but the Hunter bests them and obtains their Blood Rapture Caryll Rune. Non-infected Shadows appear as enemies later in the game in the Nightmare of Mensis and in some Chalice Dungeons.

The three Shadows attack the Hunter upon entering the Forbidden Grave. The first wields a large scimitar, the second wields a scimitar and a candlestick, and the third wields a mace and a magical fireball. The first Shadow has the most health of the three and is the most aggressive, attacking with his scimitar at a quick pace. The second Shadow tends to use his candlestick more, which he blows on to create a flamethrower. The third Shadow is the slowest, has the least health, and tends to stay away from the Hunter to cast homing fireballs at them, but will use his mace if approached. It is advised to try to separate the Shadows from each other to deal damage on a single one.

When the shared damage to all three Shadows has reached 75%, snakes emerge from under the Shadows' cloaked heads, granting them enhanced power. The second Shadow enhances his scimitar with fire from his candlestick, which he and the first Shadow can extend with their tentacle limbs. The third Shadow is able to toss three fireballs into the air that explode once they hit the ground, but they have a much shorter range than his homing fireballs.

Once only one Shadow is left, or if the last two Shadows have very low health, they get the ability to summon massive serpents from the ground. The Shadow crouches down, emits a red circle of light on the ground while chanting, causing snakes to emerge from random parts of the arena that bite the Hunter for high damage. Up to three snakes can be summoned at a time, and dig back into the ground after a certain amount of time or if the Hunter escapes their striking range. This is the most dangerous phase, as there is no telling for where the snakes will appear from the ground. It is possible to stagger the Shadow to stop the summoning process, but this requires key timing to strong attack the Shadow's back as the summon lasts much shorter than the strong combo. This phase will continue until the final Shadow is defeated. 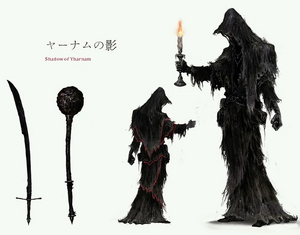 Concept art for the Shadows of Yharnam. 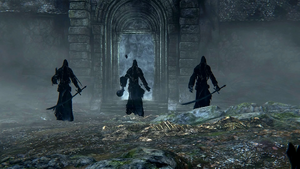 The Shadows of Yharnam emerging from the fog. 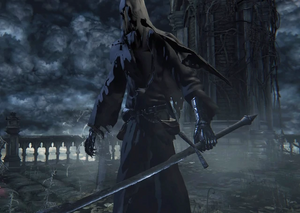 The scimitar wielding Shadow of Yharnam. 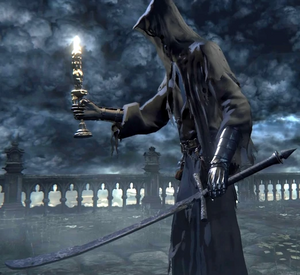 The candlestick and scimitar wielding Shadow of Yharnam. 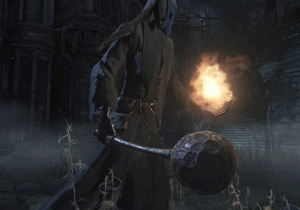 The mace and fireball wielding Shadow of Yharnam.
Add a photo to this gallery 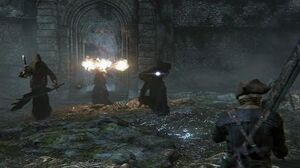 Retrieved from "https://villains.fandom.com/wiki/Shadows_of_Yharnam?oldid=3541034"
Community content is available under CC-BY-SA unless otherwise noted.