High priest of the Followers of Darkness
Vassal of Count Dracula

Ability to conjure, shape, and control the forces of Darkness

Resurrect Dracula and reshape the world under his command.

Shaft, the Dark Priest, is a corrupted clergyman who leads a sinister secret cult of worshippers of evil and wields immense Dark Powers. Shaft is one of Count Dracula's highest-ranking vassals, serving as a major villain in the Castlevania video games Rondo of Blood, its 2D/3D remake Dracula X Chronicles, and its sequel Symphony of the Night. He fanatically seeks to resurrect Dracula, whom he believes able to "purify" the world.

Shaft is cold, collected and courteous, but malevolent, imperturbable and obsessed. He delusionally regards Dracula as the "saviour" who shall cleanse the world and make it “perfect”. He despises harmony and loathes wielders of Holy Powers.

From his warped view, desire, sin and wickedness stem from peace and order, and believers who follow the Scriptures enable such "corruption". To him, Dracula's uncompromising evil is preferable to the depravity of humanity, and he sides with him willingly.

Shaft is highly intelligent, clever and crafty. He devises false tracks and smoke-screens to divert suspicion, with heroes believing the threat gone while he can work unnoticed without disturbance. He attempts to remove threats, or if possible use them for his own gain, before they can strike. 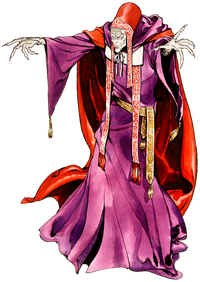 He does not hesitate to escape when the situation is out of hand, to wait for a more opportune situation. He is far from cowardly though, and faces his foes without fear when challenged, though he is not above wearing them down with summons beforehand.

He is very confident and often taunts his foes, especially when they cannot thwart him. Finally, he does not care about dying as long as his goal is achieved, for he is much more interested in his demented "mission" than his personal gain.

Shaft is immensely powerful, to the point of being able to create an entire replica of the Castlevania, upside down in the sky right over the original one, and to bend the mind of the extremely powerful vampire hunter Richter Belmont to his will; although he had to keep Richter under constant control.

He can teleport, levitate, summon demons and monsters, surround himself with a protecting force-field, manifest under the shape of a spectre, a possible projection of his spirit, and cast various spells. Being a priest instead of a wizard, Shaft does not directly controls magical forces, instead channelling dark forces through rituals and conjurations. He casts all his spells through green Orbs of Sorcery, which he uses to attack, mostly with Fire and Lighting Magic.

Shaft was once a holy clergyman, who grew disillusioned over time with the state of the world, becoming a twisted fanatic of the worst kind. As such, he reneged the way God and turned to worshipping Evil, founding the sinister cult of evil worshippers called the Followers of Darkness, pledging fealty to Count Dracula.

In Castlevania: Rondo of Blood, (and Castlevania: Dracula X Chronicles) Shaft and the Followers of Darkness perform a sacrifice to resurrect Dracula, who makes him his henchman. (What happens to the other cultists is not known, though they are seemingly killed by Dracula's power when he arises.)

Dracula sends monsters to destroy Richter Belmont’s hometown as a preemptive strike against the young hunter, but Richter was training away. Thus, he abducts four maidens, including Richter's girlfriend Annette and the magical girl Maria Renard.

In Castlevania: Rondo of Blood, Shaft appears when Dracula offers to make Annette his vampire bride (and laughs at her insults), to warn him that Richter is storming the Castlevania. In Castlevania: Dracula X Chronicles, Shaft appears in the burning town before a fleeing Annette, telling her that he will give her to Dracula as a bride, but a projection of his lord appears.

Dracula (who sensed Anette's connection to Richter) orders Shaft to bring her to him, planning to use her to gain leverage against the vampire hunter. The Dark Priest casts a sleeping spell on her and teleports with her back to the Castlevania.

Shaft later remarks Maria's vast magical powers. He puts her in a stasis and prepares to extract them, but Richter barges in and he teleports away. Maria then joins Richter's quest, and both heroes fight their way throughout the Castlevania, slaying Shaft and then Dracula, who gloats that he will forever return.

Shaft is next seen in the Ceremonial Room. He destroys the exit with an energy ball and summons four Bosses one after the other, forcing Richter or Maria to destroy them before fighting.

Shaft attacks right after his last summon's defeat and takes advantage of the heroes' weakened state. The less damage they took against the four bosses the better, since the Dark Priest is a foe to be reckoned with. He always warps out of reach to the other side of the room and uses two floating Orbs of Sorcery to attack. He can turn the Orbs into flaming projectiles; uses them to conjure lightning bolts that strike the ground below them; and infuse the Orbs with energy to make them rotate. All this make Shaft rather hard to reach and his attacks are dangerous so it is advised to remain careful.

In Castlevania: Dracula X Chronicles, if Richter or Maria failed to save the other two captives by the time they reach Annette, Dracula's curse turns her into a winged vampire and she is fought as a boss. (If Annette is rescued, a female vampire looking and fighting exactly like her can be fought as a boss in a secret level.)

If the heroes destroy Vampire Annette, the Dark Priest himself will appear to rescue Dracula and take him away after the heroes defeat his second form, leading to the bad ending of the game.

If the heroes rescued all four maiden, Shaft later appears under the shape of a Spectre that animates his cloak (or is conjured from an Orb of Sorcery in Castlevania: Dracula X Chronicles), to fight the heroes another time.

Shaft's Ghost can put up a serious challenge. He floats around and attacks by summoning the remains of two Bosses fought earlier in the game; the Behemoth and the Wyvern. The Behemoth's head charges along the ground and must be jumped over, while the Wyvern dives at the heroes and breathes a rain of huge fireballs. Shaft can also summon a flock of bats. The heroes must jump to strike their flying foe, but once again, the monsters he summons make him harder to reach.

Castlevania: Rondo of Blood has been remade few years after its release. The game once again features Richter Belmont setting out to defeat Dracula, but Shaft does not appear. However, one of the games' Bosses, the Cloaked Warlock, heavily resembles Shaft's Ghost and was most likely based on him, as he mostly fights with summons. Also, if Annette gets possessed by Carmilla, she will use Shaft’s attack from Castlevania: Rondo of Blood.

Castlevania: Symphony of the Night

Shaft is the central antagonist of Castlevania: Symphony of the Night, set five years after the events of Castlevania: Rondo of Blood. How he survived the battles of the previous game is never fully explained though. He manages to capture Richter Belmont, placing him under an invisible Orb to control him. Shaft then resurrects the Castlevania and places it under Richter's control.

The Dark Priest uses Richter as a smokescreen to make it seems he had gone mad, and attempted to revive Dracula to fight him again; so that all Vampire Hunters would come to destroy the Castlevania, and fall prey to the mightiest of them. This would also enable him to work unnoticed, even if Richter and the Castlevania were to fall.He later creates a Reverse Castle hidden in mist over the original one and starts working to resurrect Dracula a second time.

Since no Belmont can counter the threat, Dracula's dhampir son Alucard is awoken from his slumber and sets out to destroy the Castle. There, he meets with a teenage Maria and later with a brainwashed Richter.

Alucard eventually battles Richter, but the vampire hunter's death triggers the bad ending of the game; in which only the regular Castlevania crumbles, leaving Shaft alone and without opposition. If Alucard got special glasses from Maria, he will be able to see through the appearances and will notice the Orb of Sorcery controlling Richter.

When Richter returns to his senses, Shaft's projection appears and comments on the turns of events, which he deems but a small setback. The Reverse Castle is then revealed and Alucard storms it to defeat the Dark Priest once and for all. Alucard must defeat the Phantom Bat, Medusa, Frankenstein's Monster, the Mummy and Death (the five bosses of the first Castlevania game) to gather the five body parts of Dracula; which he needs to reach Shaft's secret hideout in the Dark Marble Gallery.

Alucard kills the Dark Priest and puts a definite end to his madness, telling him that the Darkness he loved so much will swallow him whole, but the villain dies gloating, for he successfully resurrected Dracula once again. Alucard, then sets up to confront his father and destroy him before he can enter the Physical Planes.

Shaft is way easier to defeat in this game, but he still has very powerful attacks. He floats in a spherical force-field, surrounded by blades that protect him against projectiles. He uses around eight Orbs of Sorcery and always launches his attacks in the same order: 1) He infuses two Orbs with fire and hurls them at Alucard. 2) He infuses two Orbs with lightning and causes a long lasting electrical current between them, while they scout the room. 3) He infuses two Orbs with red energy and make them bounce repeatedly. All these attacks are quite tricky to dodge but Alucard can turn into mist to become intangible. Shaft must be struck in-between his attacks. He has low life points and with a sufficiently powerful Familiar, he shall fall very quickly. Be careful though, for Dracula is fought right after him.

In Super Smash Bros. Ultimate, Shaft appears as a support spirit that increases a player's magic attacks. His spirit battle is against an invisible Robin while the player has reduced movement speed.