Officer Horace Willard Shallowgrave is a former truancy officer with a grudge against Catman and Timmy Turner for making him lose his job.

Shallowgrave has a patch over his eye, which has a long scar running through it up and down his face. He is also missing some teeth. He is husky, has gray hair, and wears black detectives clothing and hat with a gold truancy officer's badge. His left hand is a hook, and he has a number of weapon replacements for his hook inside his jacket.

One time Timmy Turner had wished Catman down to a kid's size so that they could go on an adventure together, during a school day no less. Princepal Waxelplax saw Timmy Turner and the mysterious Catkid playing hooky, and sent Shallowgrave after them. While having fun around town, Timmy and Catkid ran into Shallowgrave on numerous occasions, but managed to elude him every time. Eventually after Catman was returned to normal size, he threatened Shallowgrave to back off and "pick on someone (his) own size". After an angry stare and growl from Shallowgrave, Catman nervously said "besides me", and then Shallowgrave's hook turned into a rocket and he flew off.

Shallowgrave appeared again working as a drill instructor at Remy Buxaplenty's F.U.N. Acadamy. He is the instructor there and not a truant officer anymore because Timmy was the reason he lost his previous job. 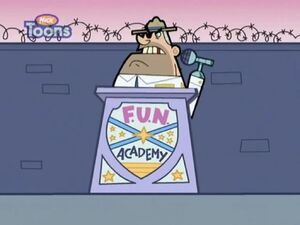