Guardian of the First, Second and Third Floors

Guarding the floors of Nazarick and executing orders given from her lord.

Serve her lord in his conquest of taking over the world.

Earn her lord's affection and love, becoming his wife.

Shalltear Bloodfallen is one of the main protagonists of the light novel series, Overlord. She is a vampire NPC created by Peroroncino that serves as the Floor Guardian of the First to Third floors. Because of their ongoing love for Ainz Ooal Gown, she is considered to be a rival of Albedo. She serves as the main antagonist in The Blood Valkyrie Arc.

Shalltear usually has the appearance of a fairly dressed lady, wearing a large dress. She has pale skin and silver hair tied up by a large bowtie. Fitting for her personality, she has seductive red eyes that capture her beauty. While she is seen to have large breasts, she is actually flat chested and stuffs her bra to give her the appearance.

In her true form, she is depicted in as a terrifying monster with a large, gaping mouth full of sharp teeth and a long tongue that hangs out. She gains sharp claws and her clothing is torn up, leaving nothing but a torn shirt on.

When facing her master, she wore a red knight armor equipped with a lance and has a pair of large angel wings.

Shalltear has a lively and flirtatious personality, being very open with sexual orientation. Despite this, she can be very sensitive on certain subjects. Most notably is her breasts which many have pointed out to be fake and are actually flat.

Shalltear is madly in love with her master, Ainz Ooal Gown and one of her reasons is because of her necrophilic fetishes. Like the rest of the Floor Guardians, she pledges her absolute loyalty to him. She views him as the most handsome man in the world and fantasies the day of being his wife, carrying his children. Because of her love for Ainz, she has come in constant conflict with Albedo, who happens to share the same desires that Shalltear has. The two have exchanged words to each other in the most insulting way and nearly fought at one point. Overall, the two do not get along very well.

Outside of Ainz and her Floor Guardians, Shalltear does not hold high sentimental value of her servants and her opponents. She is willing to kill those with no mercy, regardless of whether she's given orders or not. She also does not take failure very lightly and punishes those greatly that do disappoint her. However, when she fails herself, she can easily become depressed and can lead to consume constant alcohol. This is shown when after learning she tried to kill Ainz, she tried to drink down her guilt with poison.

According to Ainz, Peroroncino had programmed her to be very kinky, and this is shown when he gives her a punishment by sitting on her. However, rather than suffer through the pain, she becomes sexually aroused by it and ultimately enjoys it.

Shalltear is claimed to be the strongest of the Floor Guardians, right behind Gargantua, the Fourth Floor Guardian. She has demonstrated tremendous power and strength that rivals with even Ainz's skill. These include: 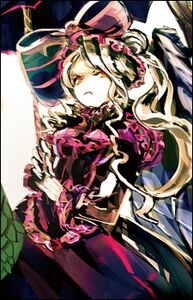 Shalltear depicted in the light novels. 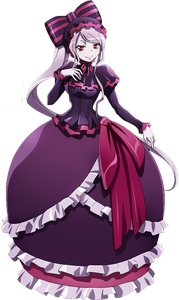 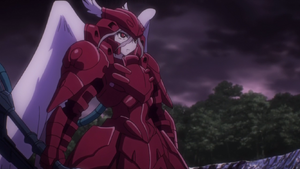 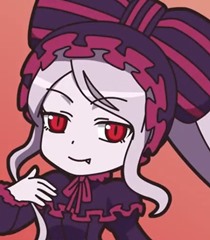 Shalltear as seen in the OVA specials. 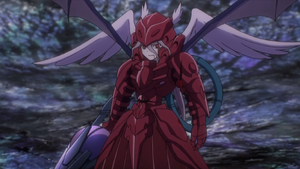 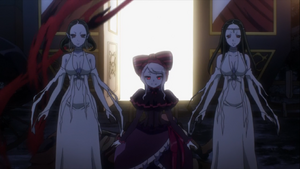 Shalltear and her Vampire Brides. 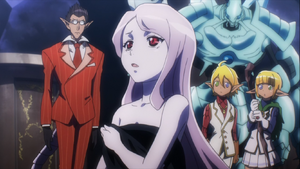 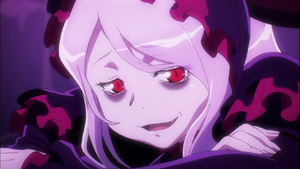 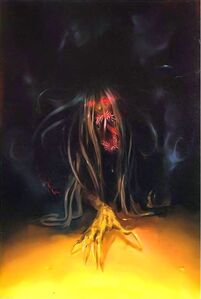 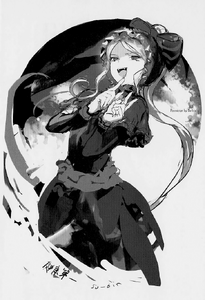 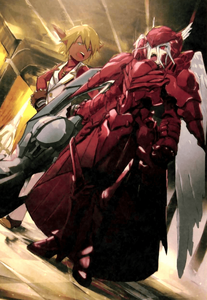 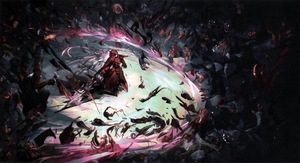 Shalltear slaughtering the Quagoa.
Add a photo to this gallery

Retrieved from "https://villains.fandom.com/wiki/Shalltear_Bloodfallen?oldid=3402869"
Community content is available under CC-BY-SA unless otherwise noted.