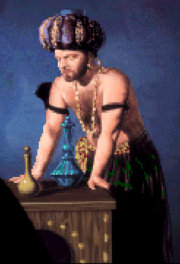 Shamir Shamazel is one of the villains and later becomes a redeemed villain of the 1992 Fantasy King's Quest VI.

He was Abdul Alhazred's genie, who first made his appearance, in Hakim's pawn shop. Disguised as an old, cloaked guy, who has yellow eyes, which flash here and there, and later eats peppermint candies and gets wasted and goes to his master and main villain, Abdul Alhazred, and lets him know that Prince Alexander, prince and main hero, got a magic map and can now travel as easily as he can to the other islands. Alhazred then sends him to warn the rulers of the islands of Prince Alexander.

Speaking of which, all these transformations are ways to destroy Prince Alexander by the orders of Abdul Alhazred. When Prince Alexander drinks the suicidal but not suicidal drink, which at first appears like it kills him in Hakim's Pawn Shop and then later it doesn't and the old man, that Shamir is transformed into, returns to Alhazred and lets him know that Prince Alexander is dead and Alhazred proceeds with his further plans of marrying Princess Cassima, heroine and princess, and to get ready. It's later revealed that Abdul used Shamir to steal the Island's treasures to get them to hate each other so Alhazred can take over The Green Isles with out anyone and anything getting in his way. After Abdul's plans are ruined, he orders him to knock the heroes out while he escapes with Princess Cassima.

Alhazred orders the death of Prince Alexander but Jollo, hero and court clown, gives Prince Alexander the lamp of Abdul's from the switch, and Prince Alexander is the new master of Shamir and says to return to lamp. Shamazel reveals he hates Alhazred and he's a total freaking asshole. Shamir then fixes the damages of the islands and aids with the end of the fueding and makes it to Prince Alexander and Princess Cassima's wedding as well.