Create a team of Fire-types.

Defeat Trainers and take their Pokémon.
Take back Pignite. (failed)

Shamus, also known as Suwama in Japanese is a minor antagonist in the Pokémon: Best Wishes anime season. He was an abusive Pokémon Trainer who abandoned his Tepig due to being too weak by his standards, who eventually joined Ash Ketchum as one of his Pokémon in his Unova team.

He is voiced by Jun Fukuyama in the Japanese version and Billy Bob Thompson in the English dub.

Shamus is a sadistic and callous Trainer who believes that only power matters in Pokémon battles. If a Pokémon in his team is too weak for him, he callously abandons them and catches a stronger replacement, optionally restraining them so they won't follow him. If they are too attached to him, he pretends to care for them to lower their guard before leaving, and laughing when they're gone. Shamus is also willing to force other Trainers to battle him to steal their Pokémon if they have "potential".

Shamus initially presents an apathetic disposition, not caring about others and insulting them. When he thinks about his own crimes, he arrogantly grins and shows no remorse about the suffering he caused, while trying to justify his actions by saying that his abandoned Pokémon would be better off freed. When looking at the sad look of the Tepig he abandoned, he laughs and boasts about abandoning his Pokémon and revealing that he faked his sorrow so that Tepig would let him go while feeling overjoyed after leaving despite hearing its cries, and continues to mock and boast no matter how angry others at him, proving how cruel and unempathetic he truly is.

Shamus prides himself on his team of Fire-type Pokémon, which he names "Fire Warriors". While he is very confident in them, he is cruel towards them as well, willing to turn them on each other if they have a disadvantage, as shown when he forces his Heatmor to attack his Emboar to snap it out of Snivy's Attract. He even says that his own Pokémon taking damage from their own attacks is the true mark of Fire Warriors.

In the end, Shamus' arrogance and lack of empathy and remorse turned out to be his downfall. When he sees that his Tepig had evolved into Pignite and learned Fire Pledge, he is impressed by his former Pokémon's power and tries to persuade it to join his team despite the possibility of abandoning it once more, and calls Ash a loser before smirking expecting for Pignite to forgive him. When Pignite breathes fire into his face and chooses Ash, he runs away yelling that he'll remember what happened.

Shamus was first seen in a flashback in the episode "The Battle Club and Tepig's Choice!", where he had abandoned his Tepig and tied it to a post with a rope, as well as tying up its snout. The Tepig had managed to escape and tried to steal food from a warehouse, which was recorded on a security camera. It was initially mistaken for an Umbreon when Ash analysed the security footage with his Pokédex, but as soon as its true identity was discovered, Ash untied its snout and fed it. After Tepig defeated the Team Rocket trio, Iris initally wanted to capture Tepig, but it chose Ash instead, in the end giving him a new companion.

"Evolution By Fire!" is the first time Shamus appears in person. He defeated a Trainer named Kylan in a Double Battle, and Ash and his companions congratulate his skills upon running into him threatening his opponent, where they see his true nature. He tells him that he didn't battle him for free and orders him to give one of his Pokémon to him. When he leaves, Ash and friends ask Kylan why he battled him in the first place, responding that Shamus forced him to battle and talked about wanting Pokémon with potential.

When the protagonists send out their Pokémon to feed them dinner, Tepig recognizes Shamus and greets him, to his annoyance. The three are initially confused why Tepig likes him, but Iris believes that Shamus was the one who abandoned Tepig. They confront him and ask him if he abandoned Tepig, in which he admits to it claiming it felt right at the time. Iris and Ash tell him to apologize, but he refuses and throws Tepig. As Ash is about to snap, Cilan interferes and proclaims it is "Judgment Time", donning a judge costume and running an imaginary court trial. As Iris yells that Shamus should be guilty, he smirks when thinking about what he did. He reasoned that he left Tepig for its own good, and forcing a weak Pokémon to battle is even more cruel, so it'd be happier set free. Ash asks him why Tepig was tied up, with Iris and the protagonists' Pokémon agreeing, before being silenced by Cilan. Shamus says that Tepig followed him anyway, but he loathed it since it couldn't battle. Don George interrupts by telling them to settle it with a battle, which Ash and Shamus agree to. Ash's Snivy agrees to battle alongside Tepig, with Cilan knowing that it had problems with its previous Trainer as well so it could understand how Tepig felt.

Tepig sits outside by itself, thinking about when Shamus released it. As he walked away, Tepig tried to follow him in affection, so he tied it up and left, ignoring Tepig's pleas for him to come back with tears in its eyes. Tepig cries from the memory until it sees Ash and his allies. Cilan notices that Tepig doesn't want to battle Shamus, but Snivy slaps him with its vine and encourages it, which brings Tepig confidence to face its former Trainer.

When the battle begins the next day, Shamus sends out his Emboar and Heatmor, while Ash battles with Snivy and Tepig (who is severely lacking in confidence). Tepig is unable to battle due to its despair from Shamus' abandonment. Shamus recognizes Tepig's qualities as the ones he rejected when he abandoned it. Tepig looks at its Trainer in sorrow, which causes him to laugh. He tells them about how he had faked feeling sorry for Tepig when he abandoned it, flashing a grin when it was gone and looking for another Tepig (presumably his current Emboar), which shocks Tepig and causes it to fall into despair, while Ash asks him if he can really consider himself a Trainer after what he did. Shamus said power is all that counts and he wants a Pokémon with a tiny bit of talent.

As Tepig lays on the ground crying in despair, Ash tells Snivy to cover for Tepig, then tells it to use Attract on Emboar. Shamus tells Heatmor to use Fury Swipes on Emboar, to Ash's confusion. Heatmor does so, causing Emboar to snap out of the Attract. Shamus' Pokémon are gaining an advantage as Snivy is the main target due to Tepig not being in the mood to battle. Snivy's willingness to help Tepig snaps it out of its grief, and Tepig is able to use Flame Charge. Shamus tells Ash that his strategy is to take his opponent's attacks and crush them even harder, and anything less is third-rate as he grins evilly. He uses a combination attack of Emboar's Flare Blitz and Heatmor's Fire Spin, which Cilan nicknames Super Flare Blitz, to attack Tepig. Snivy pushes Tepig out of the way to take the hit instead, and is defeated.

Ash tells Snivy to recover, but it still wants to cheer on Tepig, and everyone agrees. Seeing all of the encouragement not only gives Tepig confidence, but also causes it to evolve into Pignite. It also learned a new move, Flame Pledge, to Shamus' surprise. Pignite finishes Shamus' Pokémon off with Flame Charge, defeating both of them and causing Ash to win the battle. Everyone congratulates Pignite for the victory. Shamus sees Pignite's potential and invites it to join him again, calling Ash a loser trainer as he smirks expecting Pignite to accept the offer. Pignite breathes fire on its former Trainer and happily chooses to stay with Ash. With his head scorched into an afro, Shamus growls and comically runs away from the arena as he yells he'll remember this. 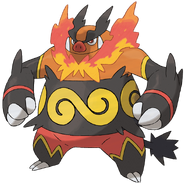 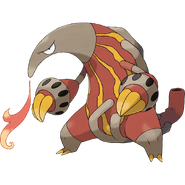 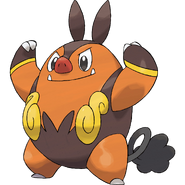 Pignite (Released as a Tepig, later joined Ash and evolved.)
Add a photo to this gallery

Retrieved from "https://villains.fandom.com/wiki/Shamus_(Pokémon)?oldid=4059472"
Community content is available under CC-BY-SA unless otherwise noted.