Composer
Leader of the Eyeless gang

Armed with a sword
Wealth and fame

Shan Yun is a villain in Dishonored: Death of the Outsider. He is encountered during the mission Follow the Ink.

He is a famed Tyvian opera singer living in Karnaca. Despite his status and fame, Yun is a high-ranking leader of the Eyeless cult. As most of the Eyeless, he wants to enter the Void. His motivation for this is stagnating inspiration, which he wants to rekindle. As all of the Eyeless leaders, Yun owns one of the keys to bank vault holding the Twin-bladed knife.

He was voiced by Paul Nakauchi.

Shan Yun was born in Tyvia and made a name for himself as a talented opera singer, filling entire opera halls. Yun eventually moved to Karnaca to a mansion in Upper Cyria to find "creative inspiration". During a performance at the Royal Opera House in honor of Duke Luca Abele, Yun excelled in his singing and received a standing ovation led by the Duke himself. Abele later gifted him with a violin and bow of Redmoor spruce as a token of gratitude. Yun also became quite wealthy by selling audiographs of his various performances. Yun gave private concerts at his home as well, at one time singing so loud that nobody could hear the screams of a burglar being electrocuted to death by the security mechanisms of Yun's private collection.

Secretly, Yun was a high-ranking leader of the cult known as the Eyeless, whom he joined because of creative stagnation. Although his admirers did not notice the difference, Yun himself was disgusted and bored by the songs he wrote. He realized that his fans were coming to his concerts because of his fame and face, not for his music.

Aware that there still were untapped depths within him, Yun sought for a way to unleash his hidden potential. Upon reading that a great composer allegedly wrote his most famous masterpiece in the throes of death, Yun realized that a taste of death might inspire him as well. To peer beyond the veil and behold the great truths of existence, Yun intended to gaze into the black eyes of the Outsider himself - hoping to find inspiration in the Void.

Due to his creative block, Yun also stopped receiving admirers to his home. Nonetheless, fans waited in front of his home each day, hoping to get a glimpse of their idol. Despite locking off his home to his fans, Yun sent a letter to his mistress Eolina Rey which contained a secret knock so that his servants would let Eolina in whenever she wanted to visit.

After the Eyeless were tasked with safeguarding the Twin-bladed knife - the blade that created the Outsider - Yun and the other leaders, Dolores Michaels and Ivan Jacobi, locked the knife up in a secure vault in Michaels' bank. Each of the leaders obtained a key and all three keys were required to open the vault. Yun's high rank in the hierarchy of the Eyeless also allowed him to connect his mansion to the Eyeless headquarter, the Spector Club, via skyway.

While having a sanguine infusion at the Spector Club, Yun overheard a man asking questions about Yun's partner Ivan Jacobi. Realizing that the man was Cristofer Jeorge, a newspaper reporter, Shan immediately wrote a letter to Jacobi advising him to use his influence to shut up Jeorge.

During her mission to steal the Twin-bladed knife, Billie Lurk arrives at Upper Cyria to find out the identities of the leader of the Eyeless gang. Investigating several Eyeless operations, Billie eventually learns that both Shan Yun and Ivan Jacobi are associates of the Eyeless. To get Yun's key for the bank vault, Billie infiltrates his home - either through the skyway or by learning the secret knock from Eolina.

Inside his home, Yun is located in the uppermost floor, in his private chambers. He is singing one of his songs, but due to his sore throat he cannot sing it well enough and eventually decides to cross it off the song list for his next concert. However, it is not required to encounter him at all, as he doesn't carry his key on his person but has locked it up inside a voice activated safe. The safe can only be opened with Yun's voice, which forces Billie to steal an audiograph card from Yun's personal collection. After using the audiograph to open the safe, Billie can take the key without ever having met Yun.

If Billie wants to kill Yun, however, she merely needs to step into the next room and engage him in battle. After Yun's death and Billie's escape, Yun's house is closed off and his mourning fans erect a shrine in Yun's honor in front of his mansion. Several of the horrified fans discuss the impact Yun had on their lives. If Billie ignores Yun, he flees the country after learning that he has been robbed, cancelling all his concerts and fleeing back to Tyvia. This is because he fears retribution from Dolores Michaels for his failure to keep safe his key. In this case, fans leave roses in front of his house and state how disappointed they are that Yun just left the country. 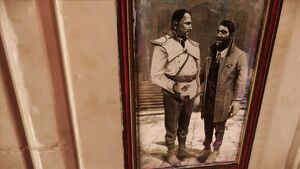 A silvergraph image of Yun with Duke Abele 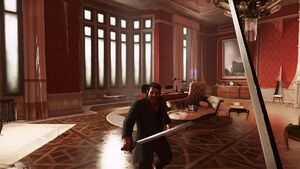 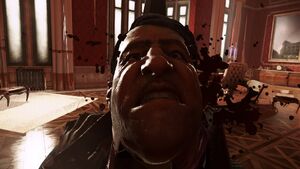 Yun is killed by Billie