Playing the violin
Getting revenge
Eavesdropping on conversations

To get revenge on Ali and the Liars for blinding Jenna (failed).

Shana is a childhood friend of Alison DiLaurentis, who was sent to Rosewood by her to act as a spy. However, Shana befriended Jenna Marshall and wanted vengeance on the Liars for what they did to her, leading Shana to pretend to be "A" to stalk the girls in New York.

She was portrayed by Aeriel Miranda.

An old friend of Ali's, Shana is informed by Ali that she is actually alive and is asked by her to travel to Rosewood in order to find out who tried to kill her. But when Shana got there and began asking questions and befriending enemies, she fell in love with none other than Jenna Marshall. She attempts to kill the Liars by setting them on fire at the Thornhill Lodge but fails when Alison, who was late, pulls them out. Shana informed the Liars of her alliance with Ali and continued pretending to be on their side. But when they traveled to New York to talk with Ali, Shana traveled there too. She shot through the window of the place they were at and chased them to the roof where she cornered them. But Ezra Fitz, who knew who she was, showed up just in time to fight her. Hanna grabs the gun from her and Shana jumps to the next roof and leaves, but not without shooting Ezra in the stomach first. Shana continues her mission and goes into the hospital, even posing as a doctor. She decides to try again and goes to the theater the Liars are with a gun. She explains to them of how she found out answers and decided to join Jenna. But there's one flaw in her plan, Aria's not there. Aria, having been informed by Ezra that it was Shana, goes to the theater and gets a gun prop from the stage. She calls out Shana's name and she turns around, at which point Aria hits her with the fake gun, causing her to fall from the stage to her death. The Liars believe that she was the Big "A" and that the game is over, though it is later revealed that "A" is still around.

In UnmAsked, Shana meets with Jenna Marshall in the park to discuss a plan of theirs.

In A DAngerous GAme, Shana is revealed to be an antagonist and is in league with Jenna and Melissa Hastings. The Trifecta of Evil plots throughout the episode and finally Shana sets fire to the Thornhill Lodge to kill the Liars, until Sara Harvey and Alison DiLaurentis rescue them.

In A is for Answers, Shana arrives in New York, dressed as "A", and attempts to shoot the Liars. However, Ezra Fitz shows up to save them and she shoots him instead, jumping away.

In EscApe From New York, Shana continues pretending to be "A", even sending a flash mob of fake "A's" to trick the girls. She shows up to the theater to kill them, but her plans are thwarted by Aria, who kills her. 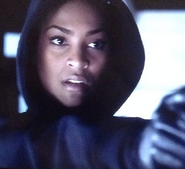 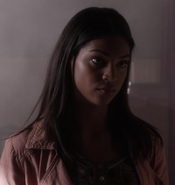 Retrieved from "https://villains.fandom.com/wiki/Shana_Fring?oldid=3883938"
Community content is available under CC-BY-SA unless otherwise noted.