He was portrayed by Jon Bernthal, who also played Al Capone in Night at the Museum: Battle of the Smithsonian, Grady "Coon-Ass" Travis in Fury, The Punisher in Netflix's Daredevil and The Punisher, Trigon in Justice League vs. Teen Titans, Braxton in The Accountant, Cole D. Walker in Ghost Recon video games and Johnny Boy Soprano in The Many Saints of Newark.

Shane is a single-minded, fearless, cunning and occasionally brutal man who is a determined survivor and also a strong leader to those in his group.

During the first season, Shane acted as the leader to the Atlanta group survivors, a position he clearly enjoyed and carried out strongly until Rick's arrival, and then became the second-in-command throughout the rest of the first and second seasons, much to his apparent dismay. During his incursions with Lori, he developed a strong obsession with her; and was never able to get his head around the fact that Lori left him for Rick, who was thought to be dead when he and Lori had their sexual encounters. He believed himself to be a more deserving man for Lori than Rick, and was determined to fight to keep her and Carl safe at all cost. Shane also showed his potential as a father during Rick's absence and developed an admiration for Carl and treated him as his own son. Shane also viewed himself as being a better father than Rick towards Carl.

Despite his strong leadership abilities, combat proficiency, skills with firearms and protective instincts, Shane was also a largely morally unstable man, and by the second season, he had only one motive; to keep himself, Lori, her unborn child (who he believed to be his) and Carl safe, no matter the cost. He believed himself to have the most pragmatic view of the apocalyptic world, and the most qualified to lead the group in the post-apocalyptic hell in contrast to Rick, whom Shane believed had good intentions that did nothing but cause disaster and interference and were likely to cause the entire group to be killed or worse. Shane was more than willing to commit brutality to keep his group safe from anything he viewed as danger, and was shown to be very capable of committing cold-blooded murder, as seen when he sacrificed Otis to save himself and brutally murdered Randall in order to protect the group from the threat Shane claimed he possessed. Shane was one of the earliest members of Rick's group to devolve into a hardened survivor and fully adapt to the horrors of the post-apocalyptic world, a world in which Dale Horvath claimed Shane truly belonged in due to his increasingly darkening nature. Shane was also a great liar and good at concocting false stories as he was able to convince the entire group that Otis sacrificed himself to save Carl during a supply run, and fooling Randall into believing that he wanted to join his group and that he wasn't going to kill him and also convincing the entire group that Randall was loose in the woods and finally revealing to Rick that he already had a plan to fool the group once he murdered him in cold blood.

During the second season, Shane devolved from a good friend and caring person into a cold, cunning, narcissistic, and murderous antagonist having completely shed his concepts of guilt, remorse, and moral correctness in favor of survival for himself and those he cares about by any means, such as murdering his own allies, going against the beliefs of the group, and betraying his former best-friend; leading to his eventual demise.

Shane was displayed as a local sheriff's deputy in King County, Georgia, and is Rick's partner, as well as his best friend since high school. Shane was wracked with grief of Rick getting severely wounded in a firefight with escaped convicts, and took it upon himself to try and rescue him as the outbreak started, attempting to avoid military personnel who were shooting innocent people in the halls. He is tortured by his responsibility in leaving him there, but also knows he never would have been able to save Lori and Carl if he hadn't left Rick. He made an impossible decision that he'll never be able to fully justify, to himself or to Lori. Shane harbored feelings for Lori, and the two began a passionate sexual relationship after Shane tells Lori (and Lori tells Carl) that Rick is dead. Among the group of survivors he formed on the outskirts of the city, Shane initially became the de facto leader, a position he enjoyed.

Shane was shocked to the core when he found Rick alive and well among the returning scavenger group, and Lori, blaming Shane and feeling he lied to her about her husband's supposed "death" in order to seduce and have sex with her, ends their affair. At the same time, Shane finds his leadership within the group challenged by Rick – this gradually pushes him over the edge, and he begins losing both his temper and control with increasing regularity, making him reckless, erratic and dangerous to everyone around him. This is demonstrated as Shane momentarily appeared poised to shoot Rick in the back (witnessed secretly by Dale), and later at the CDC, when he gets drunk and nearly rapes Lori, believing she secretly loves him. In Season 2, Lori and Shane have a short discussion over what has happened, both at the CDC and before during the crisis. Shane reveals to Lori that he plans to leave the group, but opts not to once Carl gets shot by a man named Otis, who leads them to his employer's farm. Lori is later revealed to be pregnant, with what may be Shane's baby. Shane later learns of this from Rick, and later confronts Lori about it, believing the baby is his. Lori, ultimately, admits this is almost certainly true, but makes it clear that while the baby would biologically be his, it would be raised by her and Rick only. In the Season 2 episode "Better Angels" Shane attempts to murder Rick in a field away from the rest of the survivors Rick begs Shane to reconsider and slowly talks him down which leads Shane to let his guard down Rick seizes this opportunity and fatally stabs him. Shane then returns as a walker and is shot in the head by Carl.

Shane arguably has become the primary antagonist of Season 2, reduced to being a highly unpredictable and short-tempered loose cannon. Shane bears responsibility for the death of Otis, shows life-threatening behavior towards Dale, and is focused on discrediting Rick during his manipulative interactions with Lori. He is hinting at fatally back-stabbing Rick when the time is right, presumably with the hope of reigniting a relationship with Lori and to resume dominant leadership over the group.

Before the outbreak, both Rick and Shane were stuck in a firefight with an escaped convict, both debating how to deal with the situation. Rick, unfortunately, ended up getting shot in the incident, with Shane taking care of the convict.

While Rick survived, he was left in a coma, and it is then the dead started rising. With the population being ordered into the major cities by the government, Shane, seeing the crisis worsen, accompanied Rick's wife, Lori, and her son, Carl to Atlanta to find shelter.

Shane proved instrumental in getting the two to Atlanta. As they neared the city, Lori became depressed over Rick's assumed death, and the fact that they essentially abandoned Rick in their town's hospital. However, Shane comforted Lori and the two became closer. Eventually, Lori was so desperate for closeness that she had a passionate night with Shane on the highway to Atlanta, something Shane had wanted for a long time (hinting that he could have had a long-term fixation with Lori even before this). Afterwards, Shane assumed the two were now lovers in a relationship and asked Lori, assuming the crisis would end soon, if she would tell Rick about their relationship if Rick was still alive. However, Lori confessed that she did not know. Unbeknownst to the two of them, Shane had possibly impregnated Lori, being that she is revealed to be pregnant not long after Rick returns. The three, unable to enter the zombie-overridden city of Atlanta, settled on its outskirts and joined up with Dale and the survivor group he had formed. Shane, an authority figure, became the group's de-facto leader, and the group of survivors, eventually expanding, lived on the outskirts of the city, with Shane repeatedly preaching the government would arrive and save everyone.

When Rick eventually arrived and joined the group, Shane was initially overjoyed; however, once Rick arrived, Lori quickly broke off the relationship between her and Shane. Though he acted as if he accepted her decision, he gradually became jealous of Rick and Lori getting back together, and eventually became obsessed with her. Lori confronted him, telling him that he "had to stop". While he had believed she referred to their romance, she really meant his fixation on her. At one point, he attempted to bring up their moment on the highway, which she immediately put him to a halt saying "it was a mistake". Distraught by this, and with his obsession with Lori impacting his mental state, he was sent into an emotional spiral, leading to a fight with Rick over the topic of staying at camp.

Rick supported moving the camp to a safer location, while Shane insisted they would still be saved by the Army. This severely damaged the relationship between the two, with Rick at one point blaming Shane for the deaths of those who had died, during a zombie attack of the camp. Lori sided with Rick after a momentary fight, quickly getting in between them while lashing out at Shane, calling him insane. The sight and realization of Lori going to Rick's side, along with the rest of the group's shock at his actions, caused Shane to have a meltdown, running into the nearby woods, with Rick pursuing, until Shane stopped and held him at gunpoint. He began to yell at Rick, saying how he had believed Lori would have eventually come back to him (thus hinting to Rick about the brief romance between them), and felt Rick "should have stayed dead". Seeing that Shane was completely insane and moments away from pulling the trigger, Carl, having followed and witnessed his father in danger, shot Shane in the neck. Shane choked on his own blood and died seconds later. The next day, Lori spits on Shane's grave, calling him a "son of a bitch".

When the group discovers The Prison and realize that all dead become zombies, regardless of the manner of death, Rick travels back to the camp outside of Atlanta by motorbike to dig up Shane. Rick states that Shane was a good man before shooting him in the head. Rick doesn't bother to re-bury Shane, instead riding on his motorcycle back to The Prison.

Save the Last One

Volume 2: Miles Behind Us

Volume 7: The Calm Before 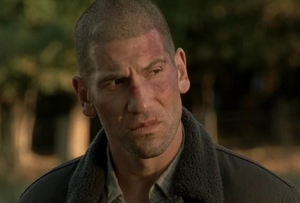 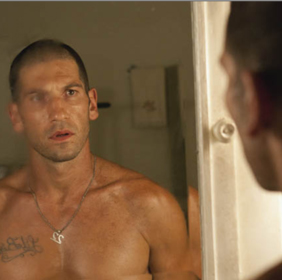 Shane's death in the Comic series.

Rick killing a zombified Shane in the Comic Series. 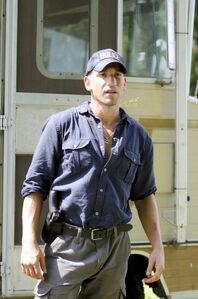 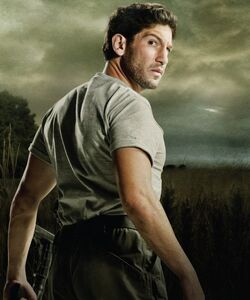 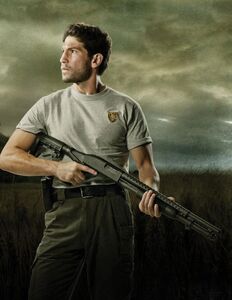 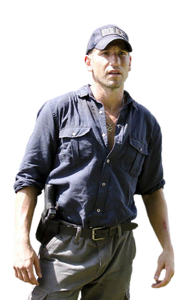 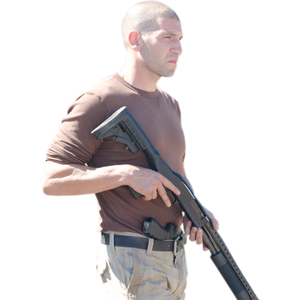 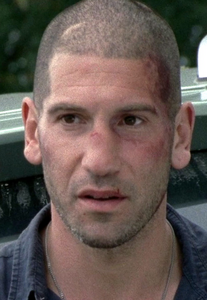