NOTE: This article is about the incarnation of Shang Tsung (2021) from the Mortal Kombat (2021). The mainstream version can be found here: Shang Tsung.

Kill all the Earthrealm Mortal Kombat champions so a tournament can never happen (failed).

He is a sorcerer from Outworld who hosts the tournaments so Outworld can invade and conquer Earthrealm wanting to kill all the warriors so that they win the tournament by default.

He was portrayed by Ng Chin Han, who also played Lau in The Dark Knight.

Shang Tsung in the past had became aware of an ancient prophecy stating that the "blood of Hanzo Hasashi" will unite a new generation of Earthrealm's champions to prevent Outworld's victory. So Shang Tsung has the Lin Kuei massacre the entire Shirai Ryu clan, including Hanzo so the prophecy can never be fulfilled. He used his immense power to lead Outworld to nine straight victories only needing one more for Outworld to invade and conquer Earthrealm. Shang Tsung would have to consume to souls of his victims to keep himself alive and would do this for many centuries.

Shang Tsung is a ruthless sorcerer that is determined to eliminate the forces of Earthrealm. Unlike his nemesis, Raiden, Shang Tsung cares very little about the rules of Mortal Kombat, as he has assembled Outworld's champions and invaded Earthrealm, for the sake of killing Earthrealm's champions before the tournament could even begin. He's usually a calm and collected individual, but can be angered when his plans don't go as intended.

Even so, he tries to keep his emotions in check. Whenever his emotions do begin to get intense however, his voice will slowly become more demonic sounding, letting out an echo. He also appears to not accept defeat so easily as he believes that, so long as he has many armies and champions to spare, his plans will not fail.

In contrast to his game counterpart, Shang Tsung is more openly evil instead of being deceitful and cunningly charismatic. He also appears to be not much of a fighter as he often watches his champions battle against their enemies, instead of taking part in battle himself.

He appears to have some form of affection for Nitara, referring her as being beautiful whenever he is with her and was visibly upset upon witnessing Kung Lao killing her. Though he didn't seem too upset over her demise and was more annoyed that Kung Lao was still left standing. 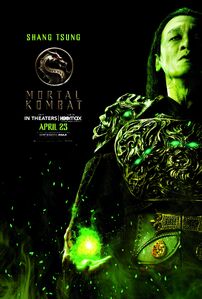