Piloting the Sly Star One

Prove that only professionals deserve to go to outer space

Shannon Lucas is the main antagonist of the Scooby-Doo franchise's thirty-third feature film, Scooby-Doo! Moon Monster Madness. She is an astronaut who dressed up like an alien on the moon to make people on Earth believe space travel isn't safe. In the process, she is responsible for almost destroying Daphne Blake's friendship with Velma Dinkley.

She was voiced by Jennifer Hale, who also played Sedusa and Princess Morbucks in The Powerpuff Girls, Rojo in Ben 10, Kronika in Mortal Kombat 11, Alecto in God of War: Ascension and Black Knight in Generator Rex.

Shannon was first seen during the Celebrity Heat News broadcast. She later welcomes Daphne, Velma and the Mystery Inc. boys onto Sly Baron's spaceship and commented on their nice spacesuits and their results on the space test they took, claiming Daphne's score to be the highest, much to Velma's jealousy. Once in space, she used her alien costume to damage the ship, causing it to land on Sly's resort on the dark side of the moon. She then terrorized Scooby-Doo and Shaggy Rogers with her alien costume. Eventually she was caught by one of Fred Jones' traps and unmasked. She then told the gang her evil plan, because she was outraged that she had to work hard to become an astronaut, while everyone else was chosen to go through a lottery. So she dressed as an alien to show the world that space travel was dangerous and then says that she switched the tests and said Shaggy is really the one who scored the highest, much to everyone's shock, including Velma. She then left them all to die, due to the explosives she hid on the resort, and heads back to Earth alone claiming that returning as a hero would give her all the money she could ever make. However, the gang escapes with a second spaceship made by Sly's brother Hudson, who planned to use it to return home and the heroes return to Earth and confront Shannon by showing the world her confession and she is taken to prison.

Shannon planned everything meticulously, and this included manipulating people into doing what she wanted. She acted friendly to everyone, but not equally and liked to flaunt her abilities. She is also very sadistic and greedy as she left everyone on the Moon to die, just for fame and money.

Shannon almost destroyed Velma Dinkley and Daphne Blake's friendship by switching the names on their tests (it was really Shaggy who scored the highest) and caused Velma to say harsh things to Daphne. 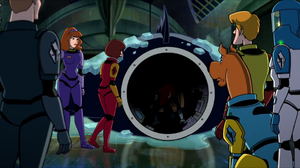