NOTE: This article is about the incarnation of Shao Kahn from the 1995 Mortal Kombat movie and its sequel, Mortal Kombat: Annihilation . The mainstream version can be found here: Shao Kahn.

Shao Kahn is the overarching antagonist of the 1995 Mortal Kombat movie and the main antagonist of Mortal Kombat: Annihilation. Much like his game counterpart, he is the ruler of Outworld who desires to take over every realm there is.

He was portrayed by actor and bodybuilder Brian Thompson.

After Outworld loses Mortal Kombat, Kahn turns to his father, Shinnok to break the ancient codes of the tournament and allow him to invade Earth. Shinnok revives Kitana's mother and Kahn's former queen Sindel on Earth, allowing Kahn to enter the realm to claim her. Kahn opens several portals to Earthrealm, allowing his armies to enter Earthrealm and begin killing the planet's people. As long as the portals remain open, Earthrealm slowly merges with Outworld, In six days' time, Earthrealm will be completely merged with Outworld and humanity will be exterminated. Raiden and the surviving warriors from the tournament rally what allies they can in order to try and reunite Kitana and Sindel in order to break Kahn's spell.

When Shao Kahn invades Earthrealm, he confronts Raiden and Earthrealm's champions at the Temple of Light where he personally kills Johnny Cage. Kahn organizes the kidnapping of his adoptive daughter Kitana and plants Jade amongst Raiden's forces as a spy. He arranges for the Earthrealm warriors to travel to Outworld in order to lure them into a trap and kill them, but Jade fails her mission and Kahn has her executed.

At the end of the film, Shao Kahn and his three remaining lieutenants, Sindel, Motaro and Ermac gather at a ruined temple for the final battle against Raiden and his warriors. Kahn kills Raiden then he battles against Earthrealm's champion, Liu Kang. Kahn pleads for Shinnok to aid him, but the Elder Gods intervene and prevent this, allowing the battle to continue without interference. During their fight, Liu Kang transforms into a dragon, but Kahn counters this by transforming into a hydra. The two battle savagely, eventually turning back to their humanoid forms, and eventually, Shao Kahn is defeated. Upon his death, the dragon tattoo on Kahn's back comes to life and rips out of the emperor's body before suddenly disappearing. The merge between Outworld and Earthrealm is reversed after Kahn's defeat. 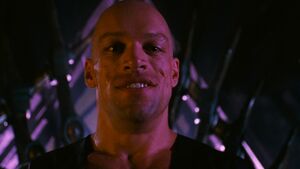 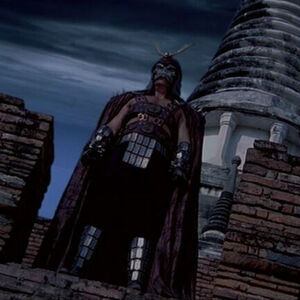 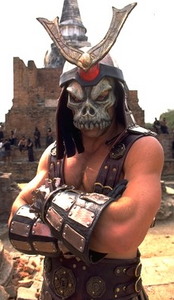