Sharaz Jek is the tritagonist of the 1984 Doctor Who serial "The Caves of Androzani", the penultimate story of season 21 and the final story of the Fifth Doctor's tenure.

He was a scientist who excelled in robotics leading him to create various androids. Thanks to his dealings with the traitourous Morgus his face was brutally disfigured leading him down a path of madness and vengeance. After encountering The Doctor and Peri Brown he decided to keep them held against their wills due to his physical attraction to Peri and respect for The Doctor's intellect before slowly beginning to redeem himself in their company.

He was portrayed by the late Christopher Gable.

Sharaz was once a young well looking man who had a passion for beauty and science. He allied himself with Morgus the latter of whom would wind up betraying him by giving him faulty detection instruments; when one of Androzani Minor's mud bursts erupted a massive explosion. Although Sharaz mostly got himself to safety he didn't close his chamber in time causing his face to be brutally burned and discolored. Jek then wore a mask for the remainder of his life and exiled himself from the rest of the world swearing vengeance against Morgus. Jek lived with the androids he created in the caves on the planet Androzani Minor where he runs the Spectrox refinery.

Meeting The Doctor and Peri

He first appeared when The Doctor and Peri were imprisoned by Androzani Major troopers. Upon seeing the two he took a deep interest in Peri and was obsessed with gaining possession of both of them as his guests. He achieved this by sending his own troops to retrieve them from their prison cell and replace them with two android replicas. Finally he had the Doctor and Peri in his grasp and introduced himself to the two before revealing he planned on keeping them as his honored guests until their deaths and planned on giving Peri the chemical he specialized in spectrox which would prolong her life to keep her for himself. This was put into threat however once it was discovered that both The Doctor and Peri had contracted Spectrox Toxemia and that Peri and Salateen (An even older prisoner of Jek) had escaped. Enraged Jek interrogated The Doctor by ordering his androids to literally tear him limb from limb for the location of Peri, when he realized it was no use however he relented and gave The Doctor up absentmindedly to a growingly impatient Stotz who had already been angry with Jek for his refusal to give he and his men full payment.

Attack on the Base

When he heard of the oncoming attack on the base he deduced both Salateen and Peri's locations and brought Peri back to the base before expressing guilt and remorse at giving the Doctor up to Stotz. Soon after this however Morgus' forces began invading Jek's base resulting in Jek quickly grabbing Peri and rushing to get them both to safety. Soon however General Chellak found the two forcing Jek into engaging in combat with him. Although the fight was going into a stalemate after accidentally knocking Jek's mask off a horrified Chellak was distracted long enough for Jek to shove him out of the door into an oncoming mud storm killing him. Jek then turned to Peri to make sure he wasn't hurt only to be met with a loud shriek of terror from her upon seeing his face resulting in Jek backing away and breaking down under a table.

After calming down, Jek was left in despair and guilt after uncovering Peri and The Doctor had both contracted spectrox toxaemia as well the fact that he had lost most of his android army in the battle and began carrying Peri hopelessly until luckily the Doctor despite in his worsening condition appeared once again. Jek explained the situation that The Doctor was already aware of and gave him an oxygen tank so he could safely travel through the catacombs of the caves to uncover the antidote, leaving Jek and Peri alone in her worsening condition

Jek's mercenary Stotz decided to join Morgus to try to find Jek's collection of spectrox, both of them now desperate and with nothing to lose. Morgus and Stotz discovered his hideout fairly quickly however in a fit of pure fury Jek revealed his disfigured face taking the two men aback before lashing out and brutally attacking Morgus, in spite of being shot by Stotz twice Jek held onto life fuelled by pure anger and finally managed to force Morgus' head into a beam killing him. Jek's finest android a replica of Salateen then killed Stotz before Jek fell into his arms and died.

Jek's remains where scorched just like the rest of him after The Doctor left the burning lair with Peri.

Shortly after this The Doctor himself heroically gave his own life in order to save Peri by giving her the anti-toxin, tragically ending his fifth incarnation but at the same time fulfilling Jek's wish of keeping Peri alive meaning his death was not in vain.

Despite being a wrathful and brutal man as well as a destructive and stubborn gaoler, Jek also was a tragic individual who chose to isolate himself from the world after his disfigurement which is what made him become the way he is in the first place.

Jek was also a very intelligent man excelling in sciences and robotics with him being able to create life like androids with almost exact human like qualities, despite this however he mainly focused on making attack drones to guard his surroundings while saving his true talents for when he needed them most.

Sharaz despised Morgus for what he had done to him and even remarked that he would not give up the spectrox until Morgus' head was on a stick at his feet. This hatred continued until his last moments when in a fit of rage he brutally attacked and killed Morgus (while also dying himself of his wounds shortly after).

Despite being a very villainous brute, Jek still had some redeeming qualities since he genuinely liked The Doctor viewing him as the only man smarter than him and a man worthy of his trust and respect while also loving Peri greatly to the point of staying by her side until near death viewing her as the most beautiful thing he had ever sat his eyes on, although at first their interactions were far from noble, with him primarily viewing her as a mere object for his affections who he continuously made uncomfortable and intimidated from his mere presence, it wasn't until she started succumbing to illness he truly showed how much he genuinely cared for her.

Sharaz Jek was a slender man who wore an all leather outfit complete with black leather slim trousers, a black leather jacket, black leather boots and one singular leather glove. Jek had a hideously disfigured face that he himself could never bear to look at caused by Morgus attempting to kill him, as a result Jek's face was mostly discoloured as a sickly green with only his right eye and mouth retaining a flesh like colour. To hide his appearance from himself and others he always wore a black and white patterned latex mask as well as a black leather cowl. He also wore one blue false eye due to his left eye being burned out. 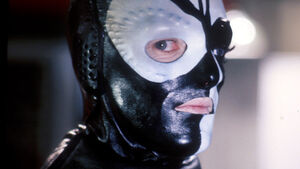 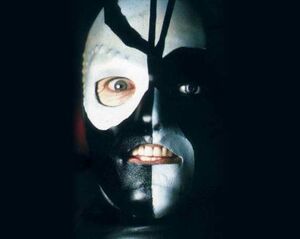 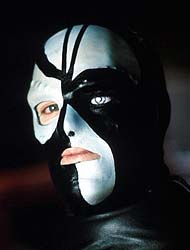 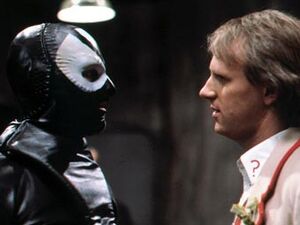 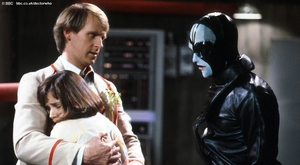 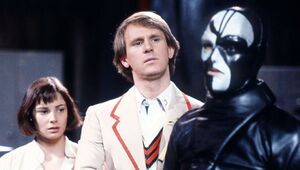 Jek talks to The Doctor and Peri about his backstory. 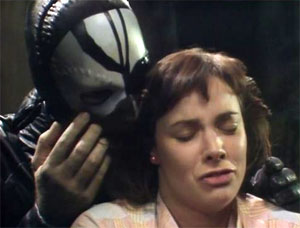 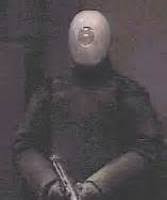 One of Jek's android guards. 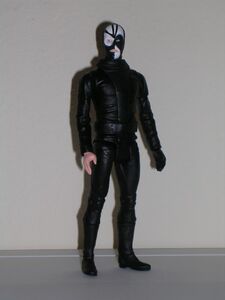 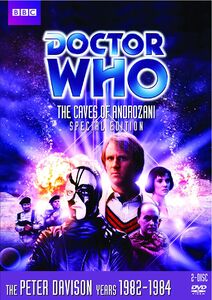 Sharaz Jek on the DVD cover to The Caves of Androzani. 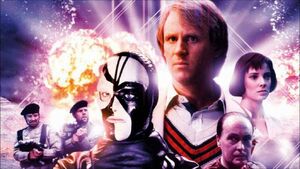 Jek on The Caves of Androzani poster. 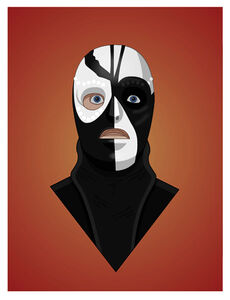 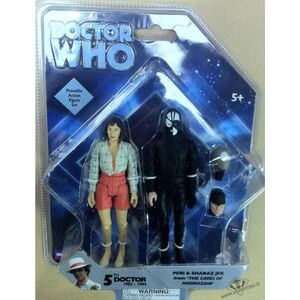 Jek and Peri's action figures in a double pack. 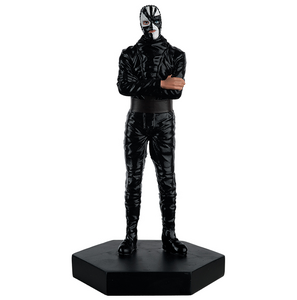 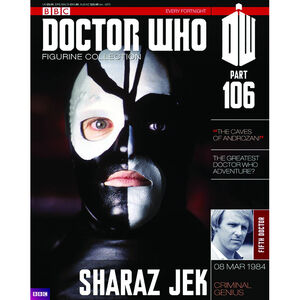 Jek on a magazine cover. 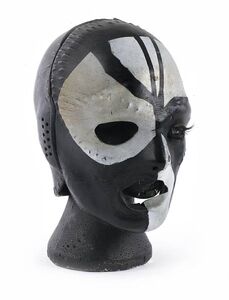 The mask of Sharaz Jek. 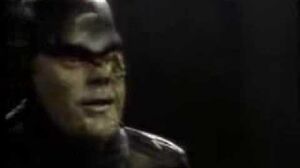