Eating fish and other sea creatures.

Help his master Joe take over the oceans and kill the children (failed).

The Shark is the secondary antagonist of the 2000 animated Danish film Help! I'm A Fish, aka A Fish Tale. He is a giant great white shark who serves as the right-hand of Joe.

Shark was a normal great white shark who ate other fish and crabs, but when he and Joe became mutated, Joe made Shark his servant after gaining intelligence. Though it can be presumed to be close before mutation, Joe only kept Shark around for his immense strength and ability to intimidate other sea animals. Shark was happy to follow Joe and obey his orders, but due to lacking Joe's charisma, he was often berated. Despite this, Joe would often back down because of Shark's strength, and would appease him until he found a way to get rid of him.

Shark and Joe nearly succeeded in their plot to take over the ocean, but were foiled by Fly, his sister Stella and cousin Chuck. Eventually, Shark turned on Joe after being fired by him, and that he offered the job to Fly and his friends. Later on, a whirlpool was caused by Professor Mac Krill's suction device with the millicrabs, and Shark got his head stuck in the tube, causing Joe to be freed. Before Joe was freed, Shark stated that he would calling the shots now, and he had the strength as Joe had the brains. It's unknown what happened to Shark, as he could have been killed, or released back into the sea.

He is Joe's great white shark henchman and like Joe, Shark was made intelligent due to a mad scientist's potion, but it only made him as smart as a moronic human. Because of this, he still tends to eat something at random, including bystanders. He is actually more powerful than Joe, but his stupidity and laziness means he cannot be bothered running things, and leaves most of the organizing and complex planning to Joe. However, if Joe makes the shark do anything he doesn't like, the shark will refuse to do it, and physically threaten joe. 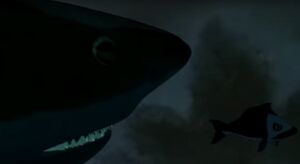 Joe and Shark before drinking the potion. 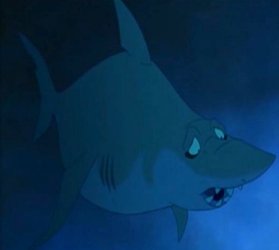 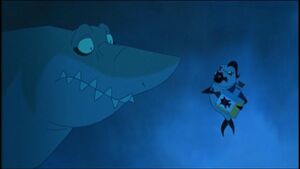 Retrieved from "https://villains.fandom.com/wiki/Shark_(A_Fish_Tale)?oldid=3776189"
Community content is available under CC-BY-SA unless otherwise noted.