Bring the Decepticons to Earth to destroy the Autobots.
Kill Bumblebee and Charlie to have them out of the way of her plans (all failed).

Shatter is one of the main antagonists of the 2018 sci-fi film Bumblebee, alongside Dropkick. She is a Decepticon spy tasked with hunting down and executing the Autobots with her partner, Dropkick.

She was voiced by Angela Bassett, who also played Dr. Amanda Waller in Green Lantern and Marie Laveau in American Horror Story.

While being more sophisticated than her partner, Shatter is destructive, ruthless and sadistic as her fellow Decepticons as she only cares about having the Autobots killed. She is also shown to be a very manipulative trickster, as she tricked Sector 7 into believing that Bumblebee is a war criminal, despite the fact that both Shatter and Dropkick are the real war criminals.

Shatter partook in the final battle against the Autobots that forced them to abandon Cybertron and flee the planet for deep space. Shatter was among the Decepticons that surrounded Optimus Prime, who'd remained behind to buy time for the others, but somehow the Autobot leader escaped Cybertron also. Shatter, alongside her partner Dropkick, were among many Decepticons assigned by Shockwave to find the now fugitive Autobots in deep space and locate Optimus to end the Autobot rebellion for good.

Shatter and Dropkick first tracked Cliffjumper to the rings of Saturn for Optimus' location, but Cliffjumper refuses to talk. It wasn't until they received a signal detailing the location Bumblebee, who is currently located in California as his homing beacon was accidentally activated by a teenager named Charlie Watson. Taking the opportunity, Shatter and Dropkick killed Cliffjumper before heading over to Earth, scanned automobiles to blend in public and contacted Agent Jack Burns (head of Sector 7).

Posing as peacekeepers, Shatter and Dropkick made a deal with Burns by claiming that Bumblebee is a war criminal and that he must be brought over to them as soon as possible. To that end, Burns had Dr. Powell to let the duo gain access to Earth's satellites in order to pinpoint Bumblebee's current location. They'd also secretly scanned two military airborne vehicles to assist should Bumblebee's finding results in conflict.

Shatter and Dropkick eventually manage to find Bumblebee after he accidentally caused a power surge in Charlie's neighborhood. With the opportunity at hand, they help Burns and his troop in capturing Bumblebee, much to Charlie's objections. While Charlie is sent home by Burns, Shatter and Dropkick interrogate Bumblebee through torture, but it wasn't until they learned that he received a message from Optimus Prime about making Earth their new refuge and protecting it from Decepticon forces. Upon seeing this, Shatter and and Dropkick decided to summon their Decepticon allies to Earth, as they plan to destroy it even killing Powell when he hears of this and finally realized how foolish he was to listen to them, warns Burns about it but didn't get the full message that Bumblebee wasn't the enemy.

Leaving Bumblebee for dead, Shatter and Dropkick head over to a transmission tower next to a docking pier, where they utilized it in an attempt to radio incoming Decepticons to their location. Fortunately, Bumblebee is revived by Charlie and heads over to the tower to stop them. While Bumblebee battles Dropkick, Shatter spots Burns in a helicopter attempting to take her down. She takes down the helicopter, killing Burns' pilot in the process. Fortunately, Bumblebee saves Burns from certain doom and kills Dropkick while Charlie manages to disable the tower.

Witnessing this, Shatter and Bumblebee fight as desperately beats him down in afit of rage as Shatter angrily swears to kill both Bumblebee and Charlie for their interferences. However, Bumblebee fires at the docks causing it to flood and bringing in a giant cargo ship, something which Shatter realized too late in horror. As a result, the ship rams into Shatter before it crashes into the dock, instantly killing her. 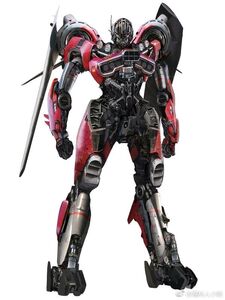 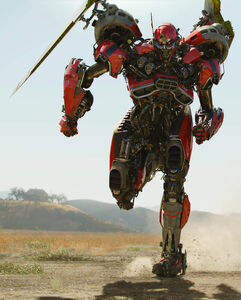 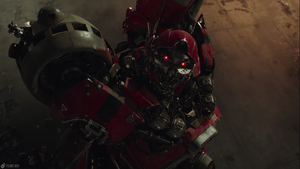 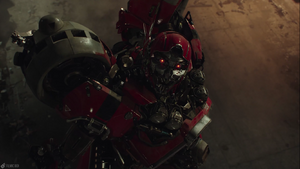 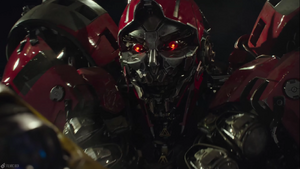 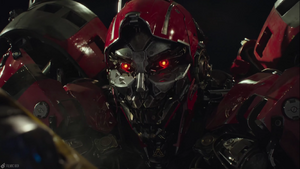 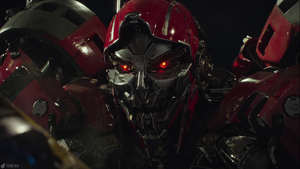 Shatter's breakdown, as she ragefully just about had enough of Bumblebee getting in the way of her plans and threatens to kill him then Charlie next. 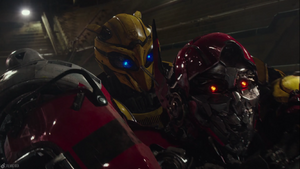 Shatter shortly before her demise.