Billy Batson, also known as Shazam, is a twisted alternate version of the heroic main-universe Shazam and a supporting antagonist-turned-anti-hero in the Injustice: Gods Among Us video game, a minor antagonist in the comic series of the same name and a posthumous character of Injustice 2. He is also set to appear in the animated film adaptation simply titled Injustice. He is one of many superheroes who have joined Superman's One Earth Regime.

His hero-worship of Superman making him assume that Superman must be justified in his actions. But as time passes, this certainty begins to disappear as more and more Shazam starts to doubt the justness of the Regime's cause. He ends up questioning the Regime at the cost of his own life.

He was voiced by Joey Naber, who also voiced Black Adam in the same franchise.

Shazam appears alongside Flash as one of the emissaries to Atlantis. When Aquaman (unbeknownst to them an Aquaman from the main universe) rejects the Regime's treaty with Atlantis, a fight breaks out.

After defeating the Flash, Aquaman bests Shazam. The two are later seen again on the Watchtower, discussing Superman's recent actions and plans to have Batman executed. Shazam admits that he joined the Regime because it made sense to him at first, but is now uncertain as to whether or not they are right anymore, remembering Superman's earlier murder of the Green Arrow. Flash agrees, but still thinks that Superman's heart is in the right place. The two's conversation is interrupted when Flash is alerted to Deathstroke's presence. Shazam is the first to fight him and is defeated, with Deathstroke noting afterwards that he is "still just a kid" (a reminder of the fact that Shazam is only an adult in his hero form, but still a kid in his normal form) and too naive to be involved in a war.

Shazam next appears in Lex Luthor's chapter, attacking him and expressing confusion at Luthor's apparent loyalty to the Insurgency. Luthor explains that he's been with the Insurgency "since the day Superman decided to herd them like sheep." Shazam attempts to defend Superman's actions, but Luthor is unmoved. Though Luthor bests him, Shazam is able to damage Luthor's armor, foiling his plan to stop Superman. When Superman murders Luthor and then snaps upon realizing that the world's population is afraid of him, Shazam is left uncertain and confused; clearly upset over Clark killing his best friend.

Later, when a now completely unhinged Superman decides to exact vengeance on Metropolis and Gotham City, Shazam objects, only for Superman to then murder him on the spot after Billy pushes him too far. His cold-blooded killing of Shazam prompts the Flash to defect, realizing that Shazam was right and that the Regime has gone too far.

In Injustice 2, soon after his arrest and being stripped of his ring, Hal Jordan finally snaps out of it and also opposes the Regime since Shazam’s death in front of their eyes.

Shazam despite his technical status as a villain he (along with The Flash) is by far the nicest member of The Regime. He is often very polite and only follows the Regime because he is genuinely trying to do the right thing and believes the regime is doing so, as well as the one most against using violence except for other criminals. He is shown to greatly respect and idolize Superman which is part of the reason why he stuck with him for so long even after he turned evil and created the regime as he thought Superman could do not wrong.

He is initially very loyal to the regime, but during his many years in it, he started to question if what they were doing was correct, even bringing up to Flash while mentioning Superman murdering Green Arrow. When Superman goes full supervillain and plans to destroy Gotham and Metropolis to set an example. Shazam finally realizes that the Regime has gone too far and openly says this to Superman that this has gone too far, showing further that he was the nicest member of the Regime as he was the first to realize this. The choice would, unfortunately, cost him his life, however. 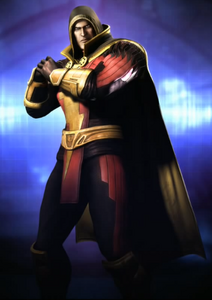 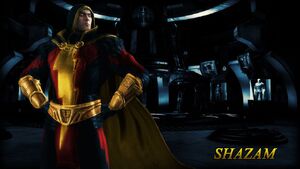 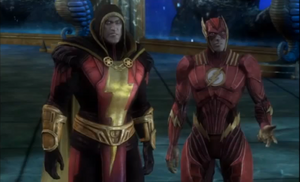 Shazam and The Flash. 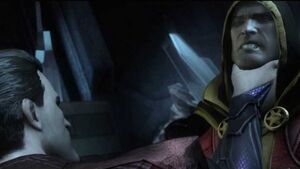