Employee of the North American branch of Ouma

Comedic Terrorist
Sheath is the secondary antagonist of Project X Zone 2. Like Saya, she works for the organization Ouma, but she comes from the North American branch, while Saya is from the Japanese branch.

Sheath makes an appearance in Project X Zone 2, she is a boss unit along with Saya and her robot suit.

An agent from the North American branch of Ouma, a rival organization to Shinra devoted to sowing chaos across the world. Together with Saya, she travels across the different worlds while working to realize Ouma's nefarious schemes.

Besides her rabbit ears, her most distinctive feature is undoubtedly her unique and enthusiastic spin on the Japanese language. Relentlessly cheerful, she remains unperturbed no matter the surrounding circumstances, and she is never one to hold back from saying what she really thinks, using whatever words she can summon to get her point across.

During combat, in addition to her fiery "Flame Blade", her automatic pistol "Flood Gun", and her deadly sharp "Draft Knife", she also fires beams from her wristwatch-like shield "Earth Clock" and can use playing cards to trap her opponents, giving her a formidable arsenal. On top of all that, she has the ability to create clones of herself. 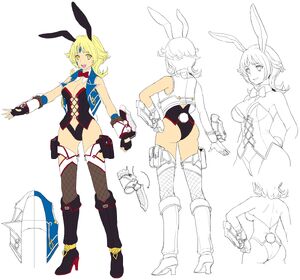 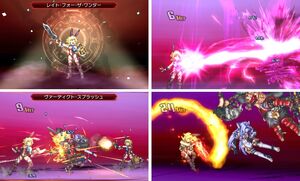 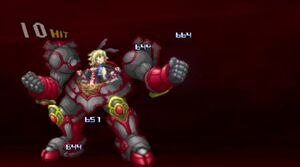