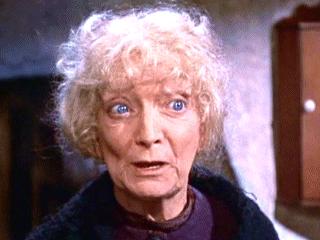 Sheelah Sugrue is the secondary antagonist in Disney's Darby O'Gill and the Little People. She is Pony Sugrue's widowed mother.

Sheelah Sugrue arrives at Lord Fitzpatrick's gatehouse, where Katie O'Gill and her father, Darby the caretaker live, to borrow some tea from Katie and promises to pay her back on Thursday. As Katie fills her cup with some tea herbs, Sheelah does the best she can to persuade her to find a husband like her young, strong, bullying son, Pony but Katie politely declines.

When Sheelah notices Lord Fitzpatrick arriving unexpectedly with a young man from Dublin named Michael MacBride to the gatehouse and overhears Lord Fitzpatrick telling him about Darby's untold retirement 5 years ago, she does everything she can to persuade him to hire her son as his new caretaker but he simply states he doesn't want "a man who is too well known to the town but a man outside would be more respected"; hinting that he already hired Michael MacBride as his new caretaker replacing Darby. Nevertheless, Sheelah remains oblivious to the event.

Later, at the pub, Sheelah shows up and drags Pony out so as to introduce him to Lord Fitzpatrick; hoping he might impress his lordship to accept him as the new caretaker to his manor house and to have the chance to take Darby O'Gill's daughter, Katie for his wife. Nevertheless, Lord Fitzpatrick does otherwise despite considering him "a big man."

The next morning, Sheelah is noticed by Darby leaving the gatehouse after paying back for the tea she borrowed the other day. Darby suspects her of doing something else other than just borrowing tea. He even warns Katie that the Sugrues aren't up to any good and considers Sheelah a "witch."

Later, when Pony tries to pack some things on his carriage, Sheelah finds a letter addressed to Michael and both of them finally realize he had the caretaker job all along, which would explain Lord Fitzpatrick's refusal. But that still doesn't stop Sheelah from convincing her son to run Michael out of town.

In the morning, at the pub, after Darby and Michael leave to get back to work, Sheelah is last seen whimpering, tending, and babying Pony when she finds him knocked out cold after being given a good beating by Michael for trying to steal his job by having him knocked out with a club and poured whiskey all over him to make him appear drunken and incompetent in front of Lord Fitzpatrick's manor house when he will arrive in the morning only to be admonished by him.