Biting people to spread the virus and creating were-sheep (failed).

Kill all of the humans on the farm (failed).

The Sheep are the titular main antagonists of the 2006 New Zealand comedy horror film Black Sheep. They were normal sheep who got infected by a virus that made them turn into carnivorous man-eaters.

The Weresheep were portrayed by Kevin McTurk. Whereas the vocal sound effects of all of the sheep were provided by Chris Hiles.

Angus Oldfield is experimenting on genetic mutation and he ends up making a virus which turns sheep rabid. He created several fetuses of unborn carnivorous sheep which he then disposed of in a trash pit. Two activists named Grant and Experience come into Angus' farm to release the "patient zero" of Angus' experiments. Grant steals the fetus but gets chased by the scientists at the laboratory. He is separated from Experience and trips in the woods, smashing the phial containing the lamb, and the lamb crawls out, and gets on Grant, biting off his ear and gnawing into his face. Grant is infected with the same virus; but, rather than make him rabid, it slowly turns him into a half-human, half-sheep monster. Later, the infected Grant meets Angus, and bites his hand, causing Angus to also get infected. Now Angus begins transforming, and becomes infected with his own experiment. However, this does mean Angus is ignored by the carnivorous sheep because they see him as one of them. The sheep all attack Angus' presentation, and devour some businessmen, and infect others with the virus. Now the businessmen start transforming into monster sheep. The sheep attack the cottage in the night where Angus and his brother Henry and Experience are fighting them off. The sheep try to eat Henry, but they bite him and infect him. Experience fights them off and the sheep then chase them into a field. Henry meets his brother Angus in his sheep form. Angus fights Henry and they both duel in the field. However, the sheep dog brings Angus into control. Angus is then injured by the plane he was going to escape on. However, a farmhand named Tucker drives up and cures both Angus and Henry using a cure the scientists had. Angus is now human but he wants to become infected once more and approaches the sheep to ask them to bite him, but they are now mad with human flesh this time and eat him to death. Henry now corners the sheep in a circle and throws a bomb at them, which ignites when a sheep farts.

Through physical contact with a sheep such as a bite, humans become infected by the same virus as the sheep transmitted from the first infected lamb. However, unlike merely turning the sheep rabid and insane, the virus has a different effect on humans: It gradually turns humans, over time, into vicious, humanoid-sheep monsters, with bloody maws, constantly drooling saliva and hyperventilating with rage. The "Weresheep" terrorize the farm and provide an additional threat to the weekend. The Weresheep resemble large furry humanoids with the ferocious-looking heads of sheep, twisted to resemble predators. Like the infected sheep, the infected humans (Weresheep) become super predators, lusting after raw flesh. They also have more intelligence than sheep, as they can recognize other humans - i.e. Angus Oldfield recognized his brother Henry, when Angus was on the verge of transforming into a Weresheep himself. Also, Grant got transformed into a Weresheep and recognized his colleague Experience. Weresheep are more sadistic and brutal than the regular sheep; as most of the infected sheep just use their maws to attack; Weresheep are shown to use their forelimbs, which they use like human arms. The Weresheep are bipedal, and are hulking monsters from the stuff of nightmares. Because they are human by all instincts, Henry and the other farm managers feel less inclined to kill the Weresheep - they merely imprison them in the barn until Tucker gives them the cure.

Symptoms of the infection will manifest as sheep mentality, including a lower IQ reacting on primal instincts such as rage, and a tendency for eating raw flesh, increasing dementia which worsens, and a tendency to say "Baa!" when using words like "Bastard". The infection will physically transform its victim into a monster within approximately 24 hours of infection. This quick-incubating disease makes it contagious, which spread through the surviving, bitten business people who attended Angus' presentation. Infected humans display low IQ, which worsens until they can be controlled by farm dogs in their sheep forms. They also display very little fighting prowess, resorting to brute strength rather than intelligence, and are often arrogant, (Angus loved bleating and rearing triumphantly over Henry during the fight) and this makes them rather dimwitted. They also have a slowed metabolism, as Angus barely reacted to being sliced over his shoulders with a plane propeller. Furthermore, they do not need to rest. It seems once a Weresheep has the scent, so it will stop at nothing to kill and eat its prey, unless of course one shuts it behind a strong door.

Tucker found a cure existed after becoming a Weresheep himself briefly. He took the cure from the scientists led by Dr. Rush, who had started the infection with Angus. He then gave the Weresheep the necessary cure, transforming them all back into disorientated humans. Notable Weresheep include Grant, Angus Oldfield, Tucker, and several unidentified business people (all cured apart from Angus). 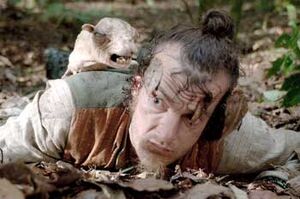 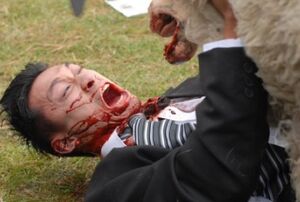 A sheep killing a businessman 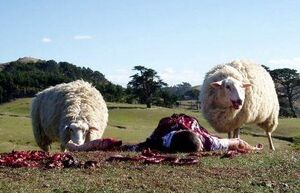 Two sheep eating a long-dead corpse of their first victim, a scientist 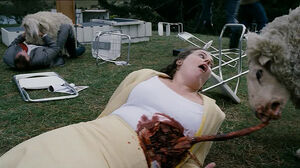 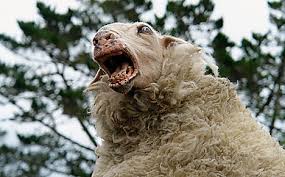 BAAAAAAAAAAAA!
Add a photo to this gallery
Retrieved from "https://villains.fandom.com/wiki/Sheep_(Black_Sheep)?oldid=3440945"
Community content is available under CC-BY-SA unless otherwise noted.