Interfering with the town.

Censor all profanity and vulgar words from children by executing the Canadian comedians, Terrence and Phillip, and go to war with Canada to prevent any more of their content from corrupting America (South Park: Bigger, Longer, and Uncut; formerly; failed).

She was voiced by the late Mary Kay Bergman in the first three seasons and is currently voiced by Mona Marshall, who also voiced Lucemon, Shelly Marsh, and Krailoni.

Even though she means well, Sheila is a middle-aged shameless control freak and morality-obsessed madwoman who constantly interferes with the town in ways that are often violent, dangerous, disastrous, prejudicial, temperamental, disadvantageous, destructive, harmful, and detrimental, she views kids as innocent and vulnerable (despite the kids of South Park often being smarter than the adults) and she thinks that even the slightest bit of controversial content will corrupt them.

To this end, she has staged a number of crazy stunts to "protect" the youth of South Park or force tolerance, often taking it to the extremes. She has even tried to declare all-out war on Canada (with the now famous song "Blame Canada") over the vulgar Terence and Phillip movie Asses of Fire during South Park: Bigger, Longer and Uncut, crossing the Moral Event Horizon. Her bigotry towards Canadians outweighs even that of Cartman, who has never shown any real racism or xenophobia towards Canada.

Sheila's constant ability to vex others and interfere has earned her much hatred from Cartman, who created a song to mock her entitled "Kyle's Mom's A Big Fat Bitch." (Unfortunately for Cartman, Sheila's ability to interfere went beyond even his knowledge, as she caught him singing the song and had him fitted with a V-Chip to prevent him from swearing as punishment, much to his anger.)

She is also a very pretentious and delusional hypocrite, as she thinks that murder, torture, and horrific, deplorable violence are acceptable in order to eliminate vulgarity and toilet humour, despite using some of these herself. To this end, she had no qualms about setting guard dogs on Mole, ending his life. Even worse, she shot Terrance and Phillip point-blank, despite knowing she could have easily hit one of the kids (including, quite possibly, her own son!) accidentally. Although Sheila does no villainous acts for monetary gain or power and has her loved ones' best interest at heart, she can't stand being challenged, indicating severe narcissism. An example of this is her personal murder of Terrence and Phillip, as it was fueled when people began to realize that Kyle was right and she was wrong. Also, she went into a maniacal rage when Kyle refused to come out of Stan's room and again when he and Ike locked her in the pantry. In all instances, she refused to listen to her son.

However, Sheila has also been shown to show regret and remorse for her actions. After her murder of Terrance and Phillip resulted in their innocent blood spilling, in turn enabling Satan and Saddam Hussein to invade South Park from hell, she was told outright, to her face, by Satan that her actions had ultimately led to these consequences, causing her resolve to completely crumble. When further derided by Chef, she initially attempted to justify her actions, saying that she had only been trying to make the world a better place for children, but eventually saw that her hatred had just given way to more hatred until nearly uncontrollable violence had resulted. In the end, after Saddam's defeat at the hands of Cartman (who used his malfunctioning V-Chip to attack and weaken him with a string of obscenities and phrases) and Satan (who simply threw him back down into hell and impaled him on a rock), Sheila admitted to Kyle that she was wrong and that Cartman's tendency to swear had saved the world. Thus, despite her need to always be right, Sheila will admit when she is wrong under the right, most extreme circumstances. 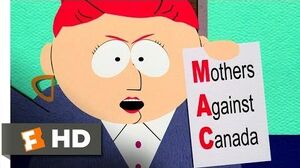