Going in his shell

Sheldon is the main antagonist in the Family Guy episode "Lois Comes Out of Her Shell". He is a turtle that Stewie Griffin brought home as a pet, but was a homicidal maniac that tried to kill him.

Stewie finds him in a pond in the park and decides to bring him home as a pet. What Stewie did not realize that Sheldon was a sociopath that wanted to kill him as revealed that he ate Rupert's left eye. It is unknown why Sheldon wanted to kill Stewie, but one reason is that he did not want to be taken from his home. He would pull sick sadistic jokes on the Griffin Family. Sheldon gave Peter a hot butt, replaced Meg's pills with alka-seltzer, put a razor blade in Stewie's book, and replaced Brain's Jack Daniels with flat diet coke making him mad at Stewie until they realized that it was Sheldon the whole time.

Sheldon then tried to kill Stewie in his sleep but Stewie flushed Sheldon down the toilet and thought he got rid of him forever but Sheldon survived and slowly made his way back to Stewie, but not before strangling a seagull that tried to eat him. Sheldon got back to the house and tried to kill him again but Stewie tricked him with a trap.

The two have a fight in Stewie's room until Sheldon ran to the living room and Stewie garbs a bat and cracks open his shell. The shell was a decoy with a bomb and it destroys the living room and knocks Stewie unconscious. Sheldon then prepares to stab Stewie but out of nowhere, Super Mario appeared and stomped on him; parodying the Super Mario games. It is unknown if Mario killed him or just knocked him out. But since this is the only episode that Sheldon appeared in and he didn't have his shell on, it is clear Mario did kill him. 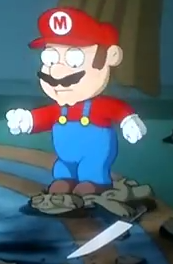 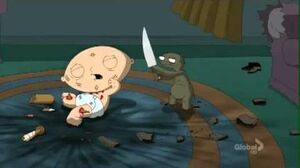