Patient Zero of Cooties
Leader of the Cootie Kids

Fighting abilities
Complete control over all the child zombies

Attacking and infecting those around her.

Infect any child in her vicinity and wipe out anyone immune to the virus (succeeded in infecting children, but later failed in killing the staff).

Get revenge on Patriot and Dink for picking on her (succeeded).

Shelley "Shelly" Linker is the overarching antagonist of the 2014 live action film Cooties. She is a school girl from Ft. Chicken Elementary School, and the cause for the spread of the virus in the school, which she herself had unknowingly gotten from eating a contaminated chicken nugget. She is also the leader of the kid zombies.

She was portrayed by Sunny May Allison.

Shelley was a student at Fort Chicken Elementary and was constantly teased by her classmates and teachers. One day, on Monday. Prior to being infected, she ordered chicken nuggets at the school cafeteria, unknowingly being served a contaminated chicken nugget. Shelley obliviously consumed the infected nugget, resulting in her being infected by the food-borne virus.

While attending substitute teacher Clint Hadson's fourth grade classroom, Shelley began to show symptoms of the virus, including blisters on her face. This led to her being tormented by Patriot, who he verbally abuses her with his friend Dink, though she didn't respond to their insults.

When Clint arrived and introduced himself to his students, Shelley appeared amused by Clint and Patriot's bickering. Shortly afterwards, Patriot resumed his torment of Shelley, culminating in him tearing off one of Shelley's pigtails. Enraged, Shelley attacked Patriot and bit a chunk of his face off, infecting him with the virus. Clint made an attempt to restrain her, but Shelley clawed his arm and fled outside the building.

Later on, during recess, Shelley's infection overcame her and she began to dig under the fence in the hopes of making an exit from the school. She was distracted when Dink confronted her on attacking Patriot. Shelley's response was to claw his face, infecting him with the virus. Shelley sent Dink off to infect the rest of the school while she resumed digging an exit under the fence. During this, Dink infected the other children, who attacked the school staff and brutally began to kill them off. Some of the staff, as well as one of Shelly's classmates, Calvin, managed to escape the carnage and hid away in the school.

During the chaos, a policeman was called to the school, where he attempted to investigate, unaware of the children's feral state. After the children mangled his fingers, he attempted to flee, but Shelley, who had successfully dug a hole out of school grounds, entered the officer's van and proceeded to kill him.

Shelley returned to the school, where she discovered the remaining staff and Calvin hiding. She was unable to enter the room, though, and engaged in a standoff with Doug, one of the school teachers. During this, Calvin explained that Shelley had "cooties". Clint, who had earlier been scratched by Shelley, began to experience stomach pain from the infection, but did not turn out to be feral, leading Doug to conclude that the virus only infected the prepubescent. Shelley eventually became disinterested and left, with Doug concluding that she had decided to commit murder somewhere else. Shelley proceeded to leave school grounds and left towards the nearby town of Danville, leaving the staff to her schoolmates.

At Danville, Shelley joined the infected children in the town in slaughtering the adults in the city. Along with a horde of other infected children, Shelley hid within a building which had been the site of a child's birthday party. During this, the school staff and the uninfected children arrived in the town and hid within the building. Once inside, Shelley and the other children revealed themselves to their enemies, surrounding them. Shelley cackled as the children surrounded their victims, but Wade, who had previously been thought dead, unexpectedly arrived.

Shelley immediately pursued the staff as they fled to crossing guard Rick's van. Clint and Wade blocked the children with a large balloon ball, but Shelley began to squeeze through. Before she could escape, Wade doused her and the other children with gasoline. As Shelley hurriedly attempted to escape, Wade lit her and the other children aflame before retreating in the van. Shelley, her body aflame, briefly pursued them, but she soon succumbed to her wounds and fell over, dead.

After Patriot is killed, The teachers along with Rick run out of gas and stop on the side of the road to go to the forest where the abandoned camp is. Shortly afterwards, they witness the corpse of an adult scout leader and are attacked by a horribly mutilated Shelley, who has survived the fire and is leading a group of zombified boy scouts, as the film ends.

Little is known of Shelley's personality prior to her infection. Presumably, she was somewhat quiet and uncommunicative, as she never spoke. It is said that she was possibly shy. Since she and Patriot used to date, it would be possible if she was a somhow romance type. But after getting infected and began to have early symptoms, like her blisters. Patriot mocked Shelley for her blisters, Shelley, while appearing awkward and uncomfortable with the insults, Shelly didn't say anything. When Clint introduced himself to the class, Shelley grinned, presumably finding Clint amusing.

Post-infected, Shelley was also shown to be very feral, violent, aggressive, foul-mouthed, obstreperous, argumentative, uncontrollable, and recalcitrant. Similar to the other infected children, Shelley's behavior seemed to stem from her childlike impulses being amplified by the virus. She appeared to have a level of intelligence even while infected, as she managed to make an exit out of school grounds under the fence, and successfully ambushed a police officer by hiding in his car. She also managed to direct herself through a forest and into Danville.

Shelley has pale skin, blue eyes, and blonde hair. She had painted pink fingernails. After being infected, Shelley gained noticeable eye bags and a series of blisters on her face, as well as visible phlegm. As time goes on, the blisters spread across her mouth and cheeks, and her skin decays.

She wore her hair in twin pigtails, but one of them was torn off by Patriot. In Danville, Shelly's face was covered in blood, suggesting she had killed more people in the town.

In the alternate ending of Cooties however, she was somewhat mutated. In which her eyes became very hollow black and more blisters. 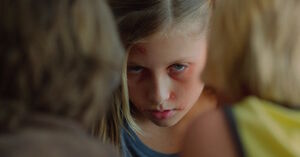 Shelley is tormented by her classmates. 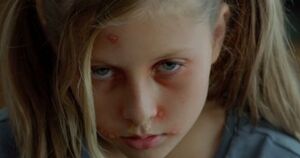 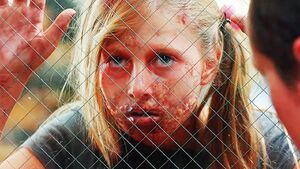 Shelley Linker as a cooties kid in a stand off with Doug.

Shelley before the infection about to eat the contaminated chicken nugget.

Patriot trying to get Shelley's attention by yanking her hair a little but ending up pulling her pigtail out. 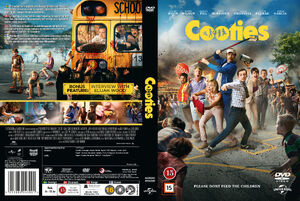 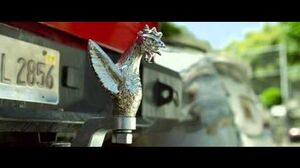